Punk rock on the canvas 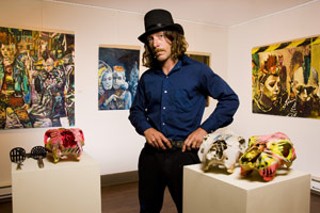 "i was a teenage werewolf. punk forever."

You wouldn't normally see comments like these, or references to a Cramps song in the guest book at an art gallery, but if you peruse through the pages at Michael Lewis's show Holidays in the Sun, at the Hydrostone Gallery until July 6, you'll see these accolades and more.

Lewis's work features large-scale oil paintings of punk rockers hanging out with friends. His portraits are of both familiar locals you have probably seen around town and unknown punks. When you look at Lewis's paintings, there is a tenderness and vulnerability that's depicted---a bit strange since punk is not usually known for its sensitive side.

A self-described "heavy metal kid," Lewis, 33, says he always had a fondness for punks and had lots of punk rocker friends growing up. He was intrigued by their fashion and hairstyles. Like graffiti in art galleries, Lewis's paintings are a mixture of high and low art. The methods themselves are high art but the subjects feature a subculture associated with anarchy, safety pins, three-chord guitar riffs and rainbow-coloured, gravity-defying mohawk and chelsea haircuts.

Lewis's works are interpretations of photographs from books, the internet and skater Greg Baller's photos. "I went through fashion books and looked at clothes of the '40s, '50s and '60s. Street scenes, punks from London," says Lewis. Some of his paintings start off as one thing and then he changes it into something else. As a result there is a jarring dissonance in some of his work. An enormous painting titled "Their First Album" greets visitors about to enter the gallery space. The painting hangs over the stairs in the boutique and features a group of punks hanging out, but with a white horse standing next to them. A punk with green hair and a girl sporting a pointy hairdo---think Spike from Degrassi Junior High---are in the foreground chatting, while a stunning white steed with pricked ears is chilling out next to them. It almost looks like the horse is eavesdropping on the two, a mischievous look on its face.

Lewis's collection of punks in paintings does not feel out of place on the wall of an art gallery. He uses thick oil paints and broad strokes---like Monet if he were into The Ramones and painted huge canvases. "I've always liked large pieces. There's a freedom there. You can move your whole arm and make a mark," says Lewis, sweeping his whole arm upwards. In high school, his teachers allowed him to stay late and gave him eight-foot chalkboards to work with.

The Hydrostone Gallery is located in the back of Lady Luck Boutique in the Hydrostone Market. The location opened in April and has already developed a loyal neighbourhood following. Co-owners Jennifer and Melanie Hartley's boutique carries local Canadian jewellery and handbags, and includes a space in the back for an art gallery. The sociable sisters felt the gallery space was a perfect opportunity to help their friend showcase his work. "We knew this work wouldn't appeal to all our clientele," says Jennifer, but the reaction has been unexpectedly positive. "We wanted to have fun and mix things up, spice it up and get people thinking and talking."

"We've had comments from older women saying, 'Wow, I could never hang this in the living room, but the friendships he's captured in these punk rockers really make me look at them in a different light,'" adds Melanie. "What I've found is people have been talking more about this show."

Jennifer says visitors coming into the gallery have found Lewis's paintings intriguing. "'Aw, look, they're people just like us.' They have heart; they have soul. Mike can really capture that essence."