The legislature’s spring session kicks off Tuesday and people are having absolutely none of it. 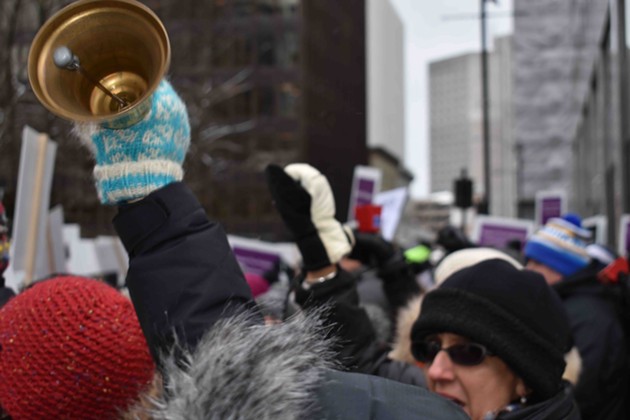 Nova Scotians are spoiled for choice when it comes to protesting their government.

In what’s practically become an annual tradition, this week hundreds of people will once again gather outside Province House demanding change and voicing their opposition to a growing portfolio of disappointments.

The Nova Scotians Rise Up event—scheduled for noon on the 27—will take place the same time Stephen McNeil's government sits down inside to officially begin the legislature’s spring session.

There are a lot of topics on the agenda for both groups.

“Whether you are fighting for education, health care, mental health care, our forests, our waters, clean air, against fracking, citizens in poverty, seniors, collective bargaining, our wildlife, fisheries, or other social and economic concerns, please join us to raise your voices and be heard,” reads the Facebook event page from organizers Trish Keeting and Stacey Rudderham. “Our government may not want to listen to us, but they will hear us if we come together as Nova Scotians.”

The continuing argument around education reform is the biggest garbage fire currently raging in the province.

The Liberals are planning Education Act amendments that will dismantle English-speaking school boards, shift principals and vice-principals out of the teachers union and implement dozens of other recommendations made in the disputed Glaze Report released last month.

In response, last week 82 percent of NSTU members voted in favour of illegal strike action to protest the Glaze reforms. Should a strike actually occur, the union will face steep fines for walking out while still under a contract imposed by the province last (AKA the last time everyone gathered to protest at the Legislature.)

Both sides have been meeting behind closed doors to try and figure out some compromise.

But the NSTU is just one voice in a chorus of critics that’s come to include teachers, students, school boards, political opposition and a cottage industry of academic experts.

And that's just on the education file.

Equally cheesed off is anyone who's had to deal with Nova Scotia's health care horror show. People are literally dying in hospital hallways. The province’s healthcare facilities are, technically speaking, busted-ass. We’re dangerously low on doctors and increasingly high on fentanyl.

Looking for something a bit more green to get mad as hell about? The environment is an oldie but a goodie. Currently, old growth trees on Crown land are being cut down to seemingly fuel a biomass plant that's been running flat-out for months. That's in addition to Northern Pulp, Alton Gas, heck, even the fracking debate has resurfaced.

Protesters might also want to prepare a few signs for the department of community services. Stagnant Income Assistance rates, the dismal condition of public housing and DCS' utter failure to obtain citizenship for Abdoul Abdi—who now faces deportation to a country he left as a young child—are just some of community services' failures, says The Coast columnist Gayle Collicutt.

“The department is callous and lacks the ability to apply a social justice lens in its decision making,” writes Collicutt. “Policies and poverty rates issued by the IA program have exasperated child poverty, food insecurity and burdened healthcare, education and justice.”

All that, and we haven't even mentioned Jamie Baillie. The current #MeToo reckoning happening for politicians accused of inappropriate and ugly sexual behaviour will surely put MLA behaviour under close scrutiny this legislative session.

More information on the Nova Scotians Rise Up event can be found here.