Speaking for The Coast: We're proud to be a founding member of the new indie media org.

Press Forward is dedicated to ensuring people in Canada have strong, community-focused journalism.
The Coast has been part of many different trade organizations over the years, but most important in the early days was the Association of Alternative Newsmedia. We found nerds like us at AAN, journalists and entrepreneurs who loved putting out a free, feisty weekly newspaper for their city.

We were welcomed by and shared knowledge with folks who ran some of the biggest, most-storied independent papers in Canada and stateside—NOW Magazine, The Georgia Straight, New York’s Village Voice, Boston Phoenix, The Chicago Reader, the Bay Guardian in San Francisco. There we traded story ideas, got cover crits, buffed up on budgeting, learned what an “alt-weekly” was supposed to be. It was a useful, supportive group that helped The Coast be better for Halifax.

But free weeklies aren’t immune to the challenges facing other news organizations in the media world that Google and Facebook currently control. Many of AAN’s mightiest titles have either closed or become shells of what they once were. There used to be more than 10 Canadian member papers in AAN. Now The Coast is the only one. And yet the need for independents to work together for mutual benefit is greater than it’s ever been.

So we are excited and proud to announce The Coast is a founding member of Press Forward, a brand-new group committed to Canadian journalism. “Press Forward is dedicated to ensuring people in Canada have strong, independent and community-focused journalism,” is how the organization describes itself. “We unify, elevate and advocate for independent media organizations and work to strengthen innovation, inclusivity and diversity in media across the country.”

The idea for Press Forward came out of a meeting of nearly 50 journalists and media experts, organized in June 2019 by Journalists for Human Rights, that I attended for The Coast. We gathered to talk about creating a sustainable future for independent media, to plot a strong direction for Canadian journalism, to figure out how to move the press forward. 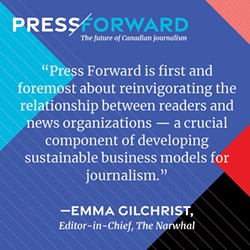 Emma Gilchrist, chair of Press Forward and editor-in-chief of The Narwhal, believes a quiet revolution is taking place in Canadian media. “Dozens of new outlets, largely online, are innovating to build new business models for journalism by doubling down on their relationships with their audiences,” Gilchrist says. “Until now, our sector has been fragmented, each of us hustling to innovate in our own corners of Canada.”

Press Forward brings these feisty independent media organizations together, to support and motivate and learn from each other. The hustling and innovation will continue at the local level, but with a fresh sense of national purpose. In Halifax, for example, we are actively working on The Coast’s evolution to better represent its community and our shared values (watch for changes in early 2021!). At the same time, we are excited about collaborating with this new group of publishers across the country. Working together can only make independent media stronger as we all press forward into the post-pandemic world.

Christine is the Publisher of The Coast. She was one of the founding members of the newspaper in 1993 and has spent her whole career publishing for a Halifax readership. Christine is responsible for the business strategy, community engagement and overall publication sustainability.
More