Young people are apathetic, we’re told. But there’s a difference between apathy and disengagement, and there are ways to help people become engaged. Michelle Kay casts her vote for “plugged in.” 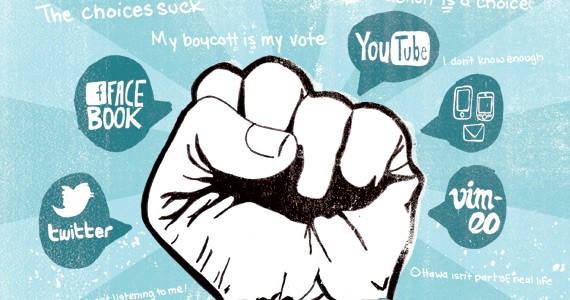 "I don't know what difference it will make. I feel like I don't know shit," says a young man on a skateboard in Millefiore Clarkes' film, Democracy Needs You. By the end of the four-minute clip, the same young man, sporting sunglasses and a green cap, says, grinning, "I probably will vote after this just because you're here, and I appreciate this."

Clarkes, a PEI filmmaker whose short went viral, describes herself as "not an overly political person" but felt "compelled to do something other than mark my ballot."

It's generally not easy to persuade someone who hasn't participated in the democratic process before to become involved. But as Canada rounds the final bend in the federal election trail, independent filmmakers like Clarkes to well-known media personalities like Rick Mercer and musicians K'naan and Arcade Fire are urging us on. Even beloved children's singer Raffi is urging "grown-up belugas" to rock the vote. "Come and rock the boat," sings a salt-and-pepper bearded Raffi. "Please get out and vote."

With every federal election, there is, inevitably, discussion and media coverage on voter apathy, particularly among young people. The 2008 election yielded the lowest voter turnout in Canadian history, with 58.8 percent casting their ballots, a drop from 64.7 percent in 2006. What caused that drop and is it apathy that is plaguing voters?

The answer, it seems, is complicated.

"It's very easy and tempting to make broad demographic conclusions," says Angus Johnston, a historian of American student activism and an advocate of student organizing. "This idea of student or youth disengagement becomes conventional wisdom. People take it [at face value] instead of exploring it. I think it's more important to recognize that there's a lot more than what the raw numbers show us."

A video that is currently making the rounds on Facebook is Dave Meslin's "TED Talks on apathy." "We live in a world that actively discourages engagement by constantly putting up obstacles and barriers," Meslin says in front of a Toronto crowd. He goes on to list six barriers that prevent people from engaging in their communities, including deep flaws with our political parties and an out-of-date elections system.

In a sense people are fatigued by elections---this is the fourth one in seven years, each resulting in a minority government. It doesn't help that the three major political parties focus more on slamming each other instead of finding solutions to the environmental and financial problems looming over us. It's no wonder many feel overwhelmed and want to stay at home on election day.

"It is very important to note the stereotype of students as being coddled and lazy with lots of free time on their hands is never an accurate stereotype," says Johnston.

The definition of a student has changed, with more university students who are older, work, have families and take on a huge amount of loan debt. To say that they just don't care is erroneous; it might just be that they don't have the energy to put into making an informed voter decision.

We need to examine the reasons why a person chooses to disengage from the electoral process. It can be a matter of accessibility---that person isn't registered, doesn't have the necessary information to go vote, feels as if he or she won't be properly represented anyway. The list of barriers goes on.

Then there are those who actively decide not to vote as a political statement. The Revolutionary Communist Party of Canada has Boycott the Elections 2011, for what they call "anti-parliamentarian democracy." The boycott is "a tool for various anti-capitalist groups to work in a non-sectarian manner," explains the website, which calls for the left to "work on building a democracy beyond the ritualistic electoral politics that defines mainstream political organizing."

Agree with the logic or not, but purposely boycotting the election is quite different from apathy.

Geoff Tanner, 47, has voted for most of his life but decided not to this election. He says he is not against voting, he merely sees no point to it, noting there are conditions that would make him vote.

"I didn't want to vote for something I didn't truly support. I decided that I would only vote for something," says Tanner. He recalls when he was 20, he spent half a year travelling in Canada but came home to vote. "I was in Vancouver and hitchhiked for six days back to Sydney," he says. As he got older, his thinking shifted. "It pains me to have this position. I would love to live in a society where I want to participate."

"A main reason for not voting in the past was my disengagement from the electoral process as a whole and the fact that I was uninterested in anything political," says Matthew M., who declines to give his last name. But the 24-year-old actor-musician plans to vote May 2. He cites an eye-opening experience at Christmas of 2008 that triggered a shift in his thinking. He was away from home, feeling homesick when a high school friend stationed in Afghanistan messaged them on Facebook.

"He hadn't been home in four months and was about to spend his second Christmas in Afghanistan," says Matthew. "That experience really opened my eyes to how easy I have it at my age, in my country and in this time, and that I had a responsibility to my friends and my loved ones to raise my voice up against things I didn't believe in, like 20-year-old kids spending Christmas in a desert war that we never wanted."

Apathy is Boring is a non-partisan group that tries to reach youth not engaged in democracy or with their communities through art and technology. "We look for low-risk entry points to get a young person who has not been involved before, to talk to them in an accessible way," says Ilona Dougherty, executive director of A is B.

The group works year-round with different chapters all across the country going to places where young people congregate, such as music festivals. It also provides information on its website about the democratic process. The group did a survey in 2008 and found the number one reason why young people didn't vote was because they felt they didn't have information or knew where to go.

"A is B provides a next step---concrete, accessible information on how to vote," says Dougherty, "to be a place where they can go to get unbiased information." She also stresses, "There are many ways to be involved in the democratic process, voting is just a part of it. Being involved in one's community as a volunteer or supporting community initiatives is a valid form of participation, as is writing to your MP, signing a petition, being involved in a peaceful protest, et cetera."

For all its faults and virtues, democracy is a challenging and complex form of governance. Low voter turnout "is a real chicken and egg problem," says Johnston. "Groups that vote, get catered to. Groups that don't vote enough, don't get catered to."

Using apathy to answer why there is low voter turnout is a scapegoat method. By simply saying that people do not care, it feeds the idea that nothing can be done about it. If the problem is feeling disenfranchised and perceived powerlessness, then figuring out how to engage people is much different than fighting apathy. While that task is just as challenging, it's not as hopeless. It simply requires strategy.

Whether people vote or not is up to them. We are lucky to have that option in this country, but it's important to be informed before making a decision. "Inaction is a choice," says Clarkes. "It's a form of action that has consequences, too."

Michelle Kay is a freelance writer, web and social media editor in Toronto. You can chat with her @yo_mk.