Pop-up soccer stadium could come together this summer

Sports and Entertainment Atlantic wants to build a 5,000-to-6,000 seat facility on the Wanderers Grounds. 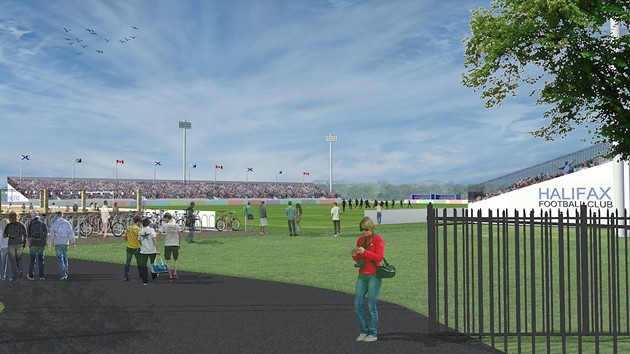 VIA SPORTS AND ENTERTAINMENT ATLANTIC
An information session on Halifax FC plans takes place March 30.
Think of it as a free kick. Halifax can test out an open-air stadium in the shadow of Citadel Hill without spending anything more than the price of admission.

Sports and Entertainment Atlantic president Derek Martin pitched the idea to councillors on Thursday for a pop-up stadium at the Wanderers Grounds, between the Public Gardens and the Museum of Natural History.

Current plans call for an easy-to-assemble facility with two large bleachers seating 5,000 to 6,000 people. Martin says it may even have a beer garden for refreshments.

The stadium would be home turf for a still-tentative professional soccer team—unofficially being called supported by the Halifax Wanderers fan group—in the proposed Canadian Premier League. The company is targeting 3,000 season ticket holders, with single ticket prices ranging from $10 to $35.

While it’s too early for him to discuss financials, Martin told reporters the combined costs for a team and stadium would run between $3 to $4 and will be financed by private investors. The company isn’t asking for funding from HRM, and SAE will assume all installation and management costs.

The three-year lifespan of the temporary facility allows the city to try on a stadium and see how it fits, before committing to anything permanent.

“In any business, it’s great if you can test it,” said Martin. “We can try to see what works and what doesn’t work before there’s a huge investment needed of taxpayer money, which we think is a much smarter and safer way to go about it.”

Councillors on the community planning and economic development committee were optimistic about the smaller-sized stadium. Lower Sackville’s Steve Craig called it the “sweet spot” missing from previous stadium discussions.

“We tend to pick the outlier; the small city that has the big facility,” said Austin. “So I’m really intrigued with what you guys are proposing.”

Martin says SAE is working with three companies on the design of the snap-together stadium, one of whom also helped create the 6,000-seat desert stadium that opens this week in Phoenix, Arizona.

When there’s no league match being played, other local high school and university teams would be able to rent the facility for use at a nominal cost.

“Our intention isn’t to try and make money off the backs of the community that wants to use the field,” said Martin. “We don’t want it sitting empty.”

Sports and Entertainment Atlantic previously helped last year’s Canada/Scotland rugby match, which was supposed to take place on the Wanderers Grounds before the poor condition of the site forced the event to move to Spryfield. A tender to improve the turf, irrigation and fencing at the Wanderers already been issued by HRM and work to repair that damage will happen over the summer.

The timeline proposed by SAE says a team could be announced as early as May, with stadium installation beginning in July and test events held in September. The inaugural Halifax professional soccer season would take place next summer, just after the 2018 FIFA World Cup.

The CPED committee will put forward a motion asking for a staff report on the idea at its next meeting in two weeks. Recommendations from that report will still need to be debated at the committee level and by Regional Council before the SEA gets its goal.