my undoing, laid before you.

A few people have asked me what I'm going to see next week at the Halifax Pop Explosion so I thought maybe I'd throw the olde list onto the blog-thing. I'm not telling you what to do, though - you are the master of your own destiny. I am merely the keymaster. Together we can be gatekeepers of Fun and mangle references from Ghostbusters every night until the end of time.

Also, I will be working full time next week and doing HPX Diary Entries every night in this space, so if you see me, chances are quite likely that I'll need a hug.

Following in the fine tradition of their southern metal brethren Mastodon (who were also their tourmates last year) Georgia's Kylesa has two drummers, dueling male-female holler-vocals and riffs that will destroy your life. I have been listening to their album Static Tensions for a month now and let me tell you, I'm really excited. Their songs have a real groove but they also boast threads of atmospheric tension that I really like. And then everything asplodes! My favorite song is below.

I will be taking it easy on Tuesday because the rest of the week is pretty insane and I already have a cough that is distressingly tubercular. Mark Sultan is the DUH choice here, folks. Fun to watch, you can dance like a tart, and make Gus' look like this living room!

From this point on everything is pretty much fucked (in a fun way) because every band I want to see is playing different shows at different venues and overlapping times. Ready, set, haggard!

I will be starting off the day by moving my lunch break to 4pm so I can go and check out these dudes over there. I have blathered on about Cursed Arrows in this space enough, I think, and you must be quite sick of it. They just moved here from Toronto, so come and give them a nice welcome. Bad Vibrations are Bad Vibrations and I could see them four times a week and that would be just super with me. I love that these early CKDU shows are happening. Here is a rad CA song based on a David Suzuki book:

Also, it was recently pointed out to me that GWAR once appeared on Joan Rivers, back when talk shows were doing that kinda thing. Another point in their corner.

Aaaand as someone who sucks at decisions I may just say screw everything and go to the Seahorse for Bloodhouse, Holy Cobras, Teenanger and Ty Segall (9pm, $12/$15) which might tickle you also if you are a mess like me who is into messy-ish music that is equal parts sweetness and darkness. I just started checking out Ty Segall and all Myspace signs point to sun-shiney low-fi hugging music. Teenanger in particular are quite a good band to fall down to and constitute a generally great jangle-chuggle party (see, real music journalists? I just made up a NEW DESCRIPTIVE TERM. Who needs to be articulate when you have all-caps and onomatopoeia?) Here they are opening for Thee Oh Sees, if you're needing an aural frame of reference.

I'm going to try and catch Cousins at CKDU (4pm, free, all-ages) and then I'm picking up my little brother at the airport. He just discovered music and is a bit of a drunk, so I thought I might hose him off from the flight, slap on his wristband and start him off with Jon McKiel and Old Man Luedecke at St. Matt's (8pm, $18, all-ages) and then swing up to see the Hoa Hoa's and Shotgun Jimmie (Coconut Grove, $12, 9pm). Like most good Upper Canadians, though, the bro is really into Sloan (Paragon, $15/$18, 9pm) though, so we actually might have to skip all those other bands so we can get in. If we can't get in, I'm taking him to see the Golden Dogs, (Seahorse, $12/$15, 9:30pm) who are pretty much the most fun band ever. Also, pretty girls will usually calm my brother's rum-rage, and keyboardist Jessica Grassia is durn cute. They all are.

Oh hell, it's a footloose and fancy-free kinda night!

While everyone else collapses in a pile of booze fumes I will be back to work for the last day this week. I'll be popping by CKDU again to catch Dance Movie rip the shit out of the CKDU lobby with It Kills (4pm, free, all-ages), who I keep continually missing for some reason, and then I am going home to sleep for about two delicious minutes.

Then I am taking the bro and whoever else wants to come to see Cold Warps, who are totally his type of thing. I know everyone and their mom are going to see the Hold Steady (Paragon, $18/$22, 9pm) but I'm on the fence. I KNOWWWW. Don't yell at me. I'm really glad they're playing here but I only know, like, six of their songs and I worry about being smothered under the annihilating power of the Super Fans (TM) with their many beers and their righteous joy.

I'll tell you what - I REALLY want to see the Pack A.D. also (Seahorse, $12/$15, 9pm). I do not understand why these girls aren't ridiculously famous. I think it's because everyone's pretending they're over the Black Keys/White Stripes blues-rock thing (and fakkkk off, you are so not.) Seriously though - listen to Becky's voice. It tells you things. Secret wild things. She is a wonder.

Then when we're feeling good about life again, we'll head over to Coconut Grove for Windom Earle and Ruby Jean and the Thoughtful Bees (10pm, $10) because again, my brother is easily distracted from brawling by shiny, pretty people and music that he can flail around to. It's good for him. Too bad White Cowbell Oklahoma aren't playing again this year - that entire show was one giant distraction. One pumpkin-shredding, big-breasted, naked-clown-PJ-from- Iron Giantdistraction.

The evening will then begin with Kestrels (Citadel Hotel Wentworth Room, free, all-ages, 6pm) who are always great, loud as shit and who I again have not seen in about a million years. Then I'll drag people to the Silly Kissers/Handsome Furs show (St. Matt's, 8pm, $12/$15, all-ages) because I can sit down because I will be old and tired and a piece of shit. Also I really like the Handsome Furs, even though people yell at me about this a lot. What gives? Is it because the keyboardist made funny faces and wore a diaper-leotard the last time they played here? 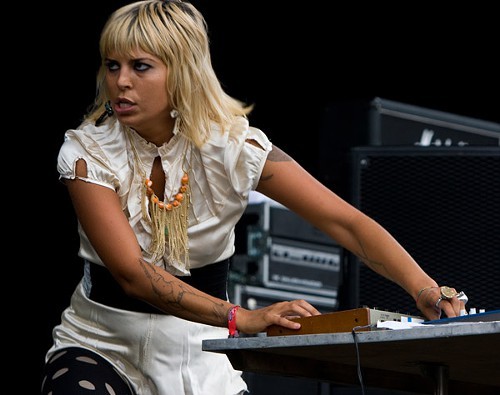 Anyway I like their music - it's dark and emotive and weird. But then again that Dan Boeckner guy was always my favorite guy/voice in Wolf Parade. You may love this excellent creepy video for their song "I'm Confused."

Then after that? WHO KNOWS? Meat Curtains at the Scotch Tapes Showcase (Gus' Pub, $10, 10pm)? Do I want the (probably) once-in-a-lifetime experience of seeing Ghettosocks at the Company House? (11pm, $10)
Maybe local grungions from hell Crosss at the Seahorse (11pm, $12/$15) are a good choice. Or do I go with the party line and go see Newmarket's hip young hopefulsTokyo Police Club even though I won't have the energy to appreciate them? (Paragon, $15/$18, midnight) I don't know. TELL ME WHAT TO DO. THE END.