Photo By Cheryl Reynolds Courtesy of Worth A Dam
This guy loves to poo.
“Clear and consistent problems with feces, urine and water pollution” around Nova Scotian fur farms is the reason behind several formal complaints lodged today with the Department of Agriculture.

The complaints were submitted by the Association for the Protection of Fur-Bearing Animals, which says it has documented numerous instances of pollution and improper animal welfare at farms across the province. Those include piles of excrement left outside mink hutches, liquid feces and/or urine leaching into the ground, animals housed within 50 to 100 metres from waterways and algae blooms near fur farms. 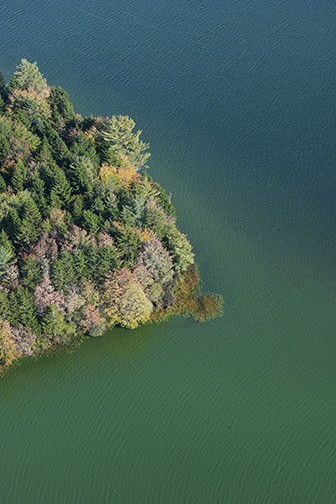 Blue-green algae blooms in a lake the APFA says is near fur farms.

“Effectively, it’s like looking at an ecological collapse from the very bottom up,” APFA spokesperson Michael Howie says of the explosion of blue-green algae in Nova Scotian watersheds. “There’s a number of small lakes I’m aware of where families who have lived on the water for generations no longer let their kids in.”

Howie wouldn't name which Nova Scotian farms his organization has complained about, pending any investigations by the province. 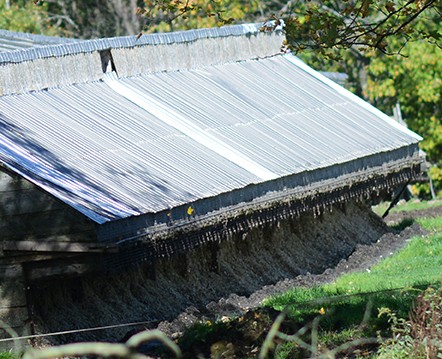 What appears to be feces piled alongside open-air hutches on what the APFA says is a Nova Scotia fur farm.

Mink is big business in Nova Scotia. Pelt sales totalled $124 million last year, and mink’s consistently the province’s biggest agricultural export. There's about 120 mink farms, employing some 1,000 workers, in Nova Scotia. Locally, the industry's been around since back in the 1930s, but it’s shown huge growth in the last few decades—jumping by over 400 percent since 1997. Those numbers dropped considerably last year, partially blamed on a "warm winter" in Russia and China decreasing demand for fur.

Still, with very rough estimates, that’s potentially more than 18,000 tonnes of mink manure produced in the province annually, with some 16 million litres of urine to wash it all down.

“The amount of waste created by these animals is extraordinary,” Howie says, which makes the safe management of their excrement difficult.

The problem’s actually produced some economic spin-off. Southwest Eco-Energy has built an anaerobic digester to separate mink methane from mink manure and turn it into power. Max Barr, the company’s president, told CBC last year that most countries and provinces have digesters like this already in operation. Nova Scotia though, is “about 30 years behind some aspects of farming.”

But the bigger problem, argues Howie, is that regulation for fur farmers is still completely toothless. Whether a mink farm handles their waste properly or just lets it run is entirely down to the individual operator.

Last year, the NDP pushed through new industry regulations for mink operators to adopt environmental management plans and better options for waste treatment and disposal. Surface water and soil monitoring programs would also have to be enacted.

Farmers have until 2016 to comply with those regulations, or face a one-year license suspension. This new Fur Industries Act will be hard to enforce, according to some critics. The same Department that promotes the fur farm industry will also be the only one regulating it—another potential problem. Meanwhile, the industry's national “Codes of Practice” is completely voluntary.

“It’s a very, very weak piece of legislation,” says Howie about the Fur Industries Act. “It’s almost exclusively designed to protect the pelts of the animals and nothing else.