Nova Scotia Medicinal Association of Cannabis Dispensaries says it's disappointed no city councillors or MLAs came to hear their stories. 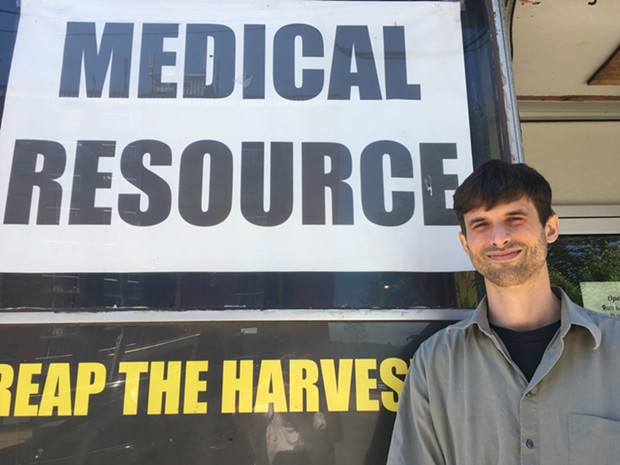 Sandra C. Hannebohm
Christopher Enns is the owner of Farm Assists and organizer with the NSMACD.

It was supposed to be a town hall to rally public support for improving cannabis legislation, but unfortunately, all of the political leaders invited were absent.

The Nova Scotia Medicinal Association of Cannabis Dispensaries invited dozens of politicians—including provincial ministers, premier Stephen McNeil and every councillor in HRM—to the Halifax Central Library a week ago for a town hall on improving legislation around medical cannabis. None of them showed up.

Heidi Chartrand of says the politicians should have attended to hear how legalization will affect patients’ lives—physically, socially and financially.

“Every time we get ignored that is one less opportunity for our government to get this done properly,” says Chartrand. “They missed out on an opportunity to show the people they care.”

Deputy mayor Waye Mason, along with HRM councillors Lindell Smith, Lisa Blackburn, Steve Craig, Russell Walker and Tony Mancini all say they were booked in advance with other engagements.

Councillor David Hendsbee said though he wasn’t able to make it himself, he passed along the invitation to constituents seeking production licenses.

Sean Cleary, who also serves as a member of the municipal cannabis working group for the Nova Scotia Federation of Municipalities, said he didn’t make it because he has no direct involvement in cannabis legislation and public feedback should be deferred to the province.

Chris Enns, of Farm Assists medical dispensary, says the province’s political leaders “have yet to hear from patients in any regard” as to how legalization “will affect their right to reasonable access.”

Speaking on a panel at the town hall, Enns said he thinks it’s possible for privately owned medical dispensaries to meet the same standards of security and quality assurance as legal distributors.

The owner of Farm Assists pleaded for members of the public to support local dispensaries in getting a special exemption to municipal policies against them. Injunction relief could allow current brick-and-mortar storefronts to continue operating even after the city decides to shut them down, he says.

With enough public support, Enns believes privately owned medical dispensaries can fill a “gap in access” for patients who can’t afford large quantities online, and rely on storefronts for their doses.

Cannabis is set to be legalized on October 17 but private dispensaries will still be illegal in Nova Scotia. The only accepted medical form is dried plants and seeds, so smoke-free edibles and extracts don’t count, meaning patients with prescriptions can’t purchase them from licensed producers in the province.

Patients can buy their prescriptions online, grow it themselves or register a designated grower on their behalf. On the other hand, recreational smokers will be able to visit brick-and-mortar NSLC storefronts.

That leaves an irreplaceable sense of community at risk, according to Enns. Patients with medical prescriptions suffer from myriad illnesses and are often unable to work. Fighting illness, poverty and stigma, some find support in the dispensary community. That’s something patients won’t find at NSLC distributors.

Enns says at storefronts with lounges, patients can network with each other and try different strains as a group, without having to purchase large batches online. They can also advise each other about which strains worked best for which of their symptoms, and in which form.

“There’s a whole element of friendship and dialogue that in any health-care situation is beneficial,” says Enns. “When you have people that really care about you, it gives you to move forward.”

A 64-year-old cannabis patient who was also on the town hall’s panel told the crowd she consumes cannabis for her health and to fight pain.

“For me, at the moment, the absence of pain equals happiness,” said Giselle, who did not give her last name, citing a desire to protect her identity.

Presenting her daily buffet of medication on a stool next to the microphone, Giselle described each vile and capsule and how often she uses them. She explained that some were extracts and edibles she can’t obtain with her medical license in Nova Scotia, but she can conveniently access them at a storefront medical dispensary.

According to Enns, it’s entirely possible for private storefronts to meet the same standards as licensed distributors.

“There is no separation between us and licensed producers, and any separation is simply because the government is not willing to step in and regulate us,” he said.

Two days after the town hall event, Enns wrote on Facebook that a staff sergeant with the Halifax Integrated Drug Unit told him “for sure” his dispensary will be shut down come October 17.