Author Robyn Maynard visits Halifax this week to speak about her new book on Black activism and racial injustice. 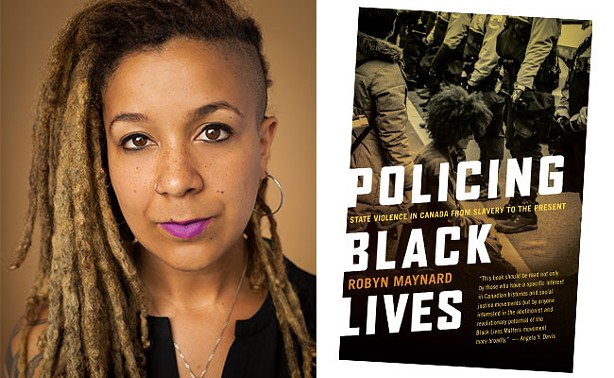 VIA FERNWOOD  PUBLISHING
Montreal author Robyn Maynard will be speaking about her new book, Policing Black Lives, at the North Memorial Library on Thursday,  December 7 at 7pm.
As social media defies geographic borders, many Canadians scrolling through their timelines are flogged with anti-Black sentiments coming out of the United States. But before basking in the centuries-old falsehood that Canada is nowhere near as racist as the US, you may want to read Montreal activist and author Robyn Maynard’s debut book,  Policing Black Lives: State Violence in Canada from Slavery to the Present.

Maynard provides readers with an understanding of Canada’s own troubling history of anti-Blackness, racism, state violence and segregation; a fact that is seldom discussed, further perpetuating those events today.

Prior to visiting Halifax for her book’s launch, Maynard spoke with The Coast about the writing challenges she faced, as well as take on Canada’s current racial climate. Her answers have been edited for style, clarity and length.


The Coast: What was the most difficult thing about writing Policing Black Lives?
Robyn Maynard: I think what was most difficult was really just the violence. Constantly reviewing the violence that Black men, Black women and even Black children have experienced across centuries and just sitting with that every day, while also trying to write those stories in a way that conveyed Black humanity.

What was it like to be a Black girl growing up and simultaneously experiencing the erasure of your own Black Identity?
I think that to a certain extent I almost feel like I wrote this book for that young Black girl. I feel like I look back and so much of what I was experiencing was unintelligible to me.

For example, being subject to intense scrutiny and heightened discipline at school is something that happened to me and to a lot of other Black girls, I later learned. But that wasn’t clear to me, one of the only Black students in my class. So, I think that it took actually looking at documentation that showed me that it was the experiences of not just myself, but of other young Black girls across Canada. I am an example of how it’s important that we know that often our experiences of racism are invalidated by a society that tells us that there isn’t racism here. It’s really important to push back against that.

This past week the Ontario Human Rights Commission came out calling for seven years worth of data in order to examine instances of discrimination against the Black community. How do you feel about that?
I think that shows us that the work of activists in Toronto for the last 20 years is paying off. We need to see that, not as like a gift that the government is giving us, but actually as a gift that came from the hard work of the Black social movements that have actually put their bodies on the line in order to force this into being recognized as an issue. For example, staging the teachers’ walkouts and actually getting police out of school. This is a product of longstanding organizing that has taken a significant amount of labour of all kinds of people. Not just in terms of Black Lives Matter, but in terms of Black parents and Black educators as well. So I think we have to thank the community for that. And I think that this inquiry stands to be a really important investigation. So we have to remember that it was fought for.

Since the beginning of Canada’s colonial history, Black persons have been challenging prevailing narratives that Canada is a multicultural haven. How has that history influenced your writing?
Looking back at the history of Black activism in Montreal in the late 1980s and ’90s, to the work of Rocky Jones in Nova Scotia, to the Black Action Defense Committee in Toronto and now to the Black Lives Matter movement—I think we really have inspiring models of leadership in terms of contesting a society that is still so profoundly racial injustice. I think of when Black Lives Matter Toronto spent two weeks camped outside police headquarters after the killing of Andrew Loku to bring attention to the issues of police killings of Black people. I think that was something that changed the national framework for talking about race in a way that really forced it into the mainstream. There are, in fact, Black communities across Canada right now who are really challenging the practice of carding and racial profiling more broadly, and saying that it’s truly an injustice. I think that is something that is definitely making inroads and encroaching on the dominant narrative. That’s something that I find really inspiring, and I hope my work is to be in conversation with the movements that we’re seeing today.