So you want to be a “Pocahottie” for Halloween? 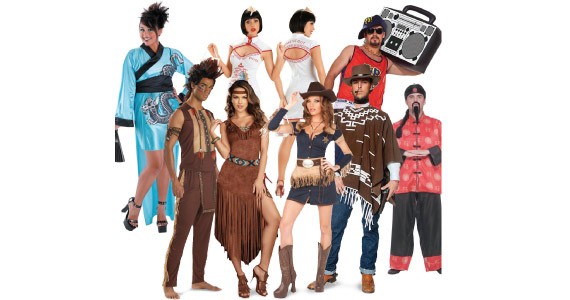 A smorgasbord of “cultural” costumes for sale at buycostumes.com.

Fall: It's the best of times and the worst of times. Shellacked root vegetables find their hand-painted way onto tables everywhere, orange and black-themed displays festoon shop windows and with the chill of October comes my spooky sixth-sense that craves old '80s horror movies and an unhealthy amount of candy corn. It's itchy sweater, apple cider, curl-up-closer season and it's the very best, until it just isn't.

Hot on the trail of slap-another-Indian-stereotype-on-it-Thanksgiving, comes Halloween, the holiday that I haven't been on speaking terms with since homemade dinosaur costumes were replaced with slutty-everything and $40 "Indian for a night" abominations in those here-for-a-month holiday stores.

The cultural appropriation of indigenous peoples is a disquieting trend that in the past couple of years has seen a resurgence, jumping from runways to department stores, mainstream television and a hipster near you---it seems like everywhere I turn, someone wants to don a synthetic neon feather headdress, paint their face and swing a plastic tomahawk around to their favourite dubstep beats. And who is it hurting, really, when you pull on your fake moccasins and "Navajo tribal panties" from Urban Outfitters or take a swig from your fresh-off-Etsy Dead Indian Chief flask? It's not like you're contributing to the long history of the subjugation of native peoples or misrepresenting the headdress---an adornment that has to be earned to be worn (and rarely by women). You're just trying to have some Ke$ha-style fun, right?

Even now, in the makeshift department store tent sprawled out in the Mic Mac Mall parking lot (irony, they've got it), Spirit Halloween looms, offering (among other cultural-themed costumes like geishas and African royalty) over 60 Indian-tagged outfits and accessories to complete your native look. A quick search on the website reveals that the two most popular outfits are the Pocahottie Adult Costume and the Sexy Indian. You might think that would be enough to get your imagination chugging but they also provide the following descriptions, just so there's no confusion:

"Girl, you won't be sitting around the campfire stringing beads in this Pocahottie Pow Wow costume! The work is done and it's time to play cowboys and Indians, only this time the Indian picks off the cowboys that she wants. Put the wow in pow wow and practice some Native American rituals in this sexy Pocahottie costume. Is that an ear of corn in your pocket or are you just glad to see me?"

And if that wasn't enough: "Hey cowboy--- get a look at this Indian! Stop him in his tracks in this sexy Indian Dream Catcher adult costume and all your dreams will come true. There's no need for a bow and arrow--- just shoot him sexy looks and he'll make tracks in your direction---it might get so hot he'll put out smoke signals!"

Fun, right? Maybe, if you can forget that this description is caricaturizing a very real, contemporary and diverse culture that is comprised of 614 different First Nations communities---with over 60 distinct languages and dialects---in Canada and even more throughout the US. Never mind that the historical and current sexualization of Aboriginal women directly influences their welfare. According to Statistics Canada, the violent victimization of Aboriginal women is almost triple that of non-Aboriginal women and The Native Women's Association of Canada has reported more than 580 cases of missing and murdered indigenous women nationally. There's obviously an elevated risk to being a native woman.

But that's not your problem, right? You're just trying to look hot for a night of body shots and dancing---and you always did love Disney's Pocahontas. Plus, it's not like the mainstream media has much to compare this version of "Indian" to, it's usually "sexy squaw" or nothing at all so if you didn't know better, you're just keeping up with the status quo.

So why is it that on Halloween, when, along with all the goblins and ghouls, vampires and witches, zombies and superheroes, comes a parade of offensive costumes that boldly trot out every stereotype and rampant misconception under the sun? Why is it that we seem to give everyone a free pass to be as inappropriate as they want?

Louise Krashiewicz, a cultural anthropologist at the University of Pennsylvania, has become a sort of expert on the ritual of Halloween and argues that the point of the holiday isn't to get stuffed on mini-chocolate bars but to allow ourselves, as a society to go "culturally crazy" for a night. During Halloween "we get to see what happens when the world is turned upside down and all the rules are broken," she says. "That's why Halloween is our most important ritual. Our culture has all these rules and expectations ---Halloween is your chance to try out what it's like to be the 'other,' other than what you normally or naturally are."

And what of the people who cry offense? "The lines of acceptable behaviour are really sketchy because the whole purpose of Halloween is to erase those lines," says Krashiewicz. "Maybe you're not supposed to acknowledge the proper way of acting for one day. You are given license to act like a total idiot. We have to as a culture allow that, [in order] to acknowledge that that is something we don't want in our society. The logic of it is that if we want it to be a powerful ritual holiday, then that's what we have to allow. You may have to face the consequences which opens up a conversation which is what it's all about---what would break society apart? If they acted like that all the time. "From my perspective, if the purpose of this ritual is to show what can make the world come apart then you should encourage all the worst stereotypes. Because no one's going to be hurt by a costume, they are going to be hurt by real actions. The costumes aren't going to hurt people, the best part is that they will open up the dialogue."

Whether costumes have the power to damage us is a dialogue the students of Ohio University amped up last year when they created the "We're a culture, not a costume" campaign, aimed at encouraging students to avoid culturally offensive Halloween costumes. It went viral, spawning fervent opinions on both sides and a meme mocking it. The posters feature Ohio U students of various backgrounds holding up pictures of people wearing costumes that stereotypically caricaturize their culture and the line "This is not who I am, and this is not okay."

The meme has a similar design style,

featuring classic characters and their real-life counterpart. In one, a golden retriever holds a picture of a man dressed as a dog with the original tagline. It's an example of a common expression of dissent that you might stumble over on any number of articles that have raised this issue, one that opens up more problems than it supposedly solves.

Martha Radice, an urban anthropologist at Dalhousie University, shares those concerns. "I don't think [costumed people] are starting a dialogue, I think it can start a dialogue, but that's not the intention, the intention is kind of being funny, having fun, maybe being scary, traditionally," she says. "I think among adults it's an excuse to party. And I think there is some sense that Halloween is playing with taboos in some way, but whether that excuses completely offensive behaviour is another matter.

"It's about dealing with the 'other' with the world beyond, in Halloween when you dress up as a ghost it's because you don't want them to be haunting you. You are playing with boundaries in some sense for Halloween, but that said, I think there are some seriously offensive costumes out there. One of the reasons it can be so offensive is when you dress up in an exoticized representation of a culture it reduces it to that level of fantasy---of goblins and witches---it's reductionist and stereotypical because it tends to be a caricature of that complex whole."

It's precisely this reductionist thinking that can be so problematic. The more we are willing to reduce the complexity of Aboriginal people to a stereotypical image; the more we allow those stereotypes to perpetuate the mainstream media; the more we mock and otherwise disrespect regalia and the sacredness of the headdress; the more we reward companies for appropriating indigenous culture instead of supporting those artists, crafters and businesspeople of the culture itself; the more we do this---the more it contributes to the very real problems that plague Indian country today.

"I think part of the offense is being able to buy a culture at Walmart," says Radice. "It makes it so easy, so reductive, such a snap. It seems to make it so thoughtless---it takes so little to do. You pick it up and put it on and there you are."

Lindsay Rainingbird is Cree, the online community editor at The Coast and still wishes she could be a velociraptor 24/7.