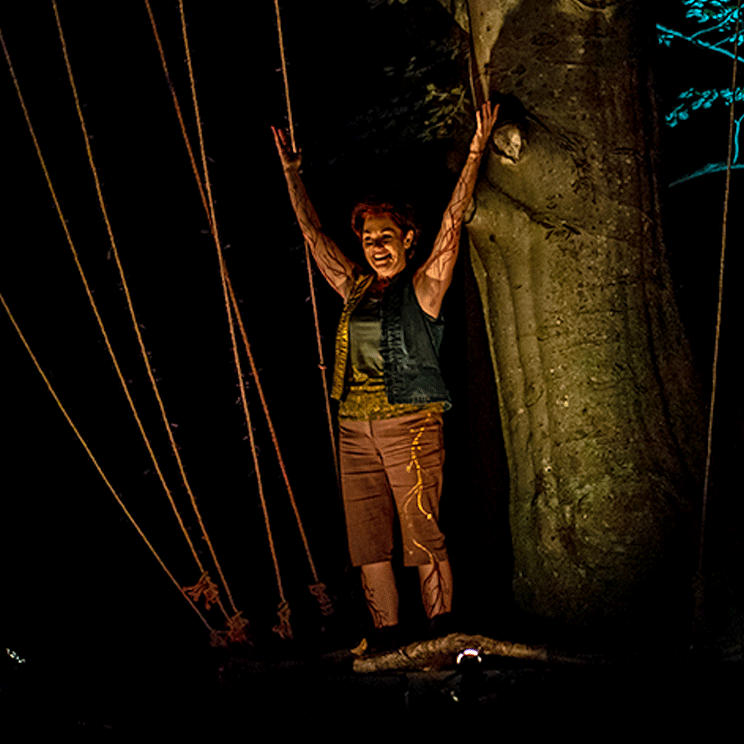 Submitted
Ann-Marie Kerr’s command of character keeps the story suspended in reality as it questions what reality even is.

Walking along a path at Point Pleasant Park after dark—with bundles of fairy lights dotting the way—the crowd for the opening night of Adventures was silent, a buzzing anticipation mixed with reverence. It was the feeling of slipping out of your cabin at sleep-away camp on an oppressively hot night, looking for some mischief.

Fashion show "This Is Us" serves the community *and* serves looks: Soli Production's first pandemic-era event will inspire you to get dressed this Sunday.

Brandon Michael tells us a joke: The local comedian and scene incubator will help you LOL.

The play—the world premiere of a piece that took lauded Halifax playwright Gillian Clarke most of her 20s to write, put on by the award-winning Keep Good Theatre—starts there, long before actor Ann-Marie Kerr says her first lines. It starts with the night sky fading from sunset pink to inky black, with the winking of those world-building fairy lights matching the stars above as audience members are escorted to a secret part of the park for the show (which runs nightly until Sunday, August 29). By the time we find our seats, the noise of crickets is so on-key it’s hard to tell if it’s real—or if it’s part of the pitch-perfect, original sound design Merritt Award winner Jackson Fairfax Perry crafted.

The stage is small, about four feet high and just as deep, wrapped around an old-growth tree. The only adornment it needs is the light design of Gloria Mok, whose palette of green and purple flashes us through time and character’s perspectives. Billed as a “part fairy tale part gritty-real-life tale,” Adventures is sometimes crass (name another time you’ll hear someone talk about “splooging” onstage) and always tender, tracing the not-quite-love story of PJ and Wendy, two teens in over their head with this whole business of growing up.

Kerr acts as both leads, and also as narrator Mother Tree, in a seamless slip-slide that makes you feel the valleys of misunderstanding between PJ and Wendy deepen and then flatten (and then deepen again) with the slightest inflection of her voice. There’s talk of going to the mall, making out in the forest, boysplaining that’ll soon graduate to mansplaining. The dialogue feels lifted from the conversations of kids your mom told you to avoid in grade school. Kerr’s command of character keeps the story suspended in reality as it questions what reality even is, veering from laugh-out-loud funny (no, really) to unabashed poignency when the moment calls for it.

And the moment does call for it, pretty often throughout. When Clark’s script asks with aching honesty: “What if I am part of the last generation to experience anything wonderful?” tears flowed throughout the audience of 30-somethings. Not since Tony Soprano first confessed to his therapist that “lately, I'm getting the feeling that I came in at the end. The best is over,” has someone managed so succinctly to convey the disappointment that comes from looking to the future in the modern age. But where the emissary of prestige TV chose violence, Clark does something bolder and more radical: She asks her characters, her audience and even herself to choose hope.

“Go forward, one step at a time, in the darkness,” Kerr’s Mother Tree says. The audience winds its way back to the park entrance (guided by flashlights doled out by the theatre company, with the option of being transported by golf cart for greater accessibility).

We spill from the parking lot towards our homes and lives, thinking of PJ and Wendy and recalling when we first wondered if magic was real, after all. Above, a dusty rose-coloured moon hangs in the sky, reminding us that it is, and was, and always will be.

Tickets for Adventures are available through Ticket Halifax and are pay-what-you-can on a sliding scale. The performance runs until Aug 29, with attendees arriving at Point Pleasant Park’s Tower Road entrance at 8:30pm to be led to the secret stage.