Flag On The Play returns for more football funnies 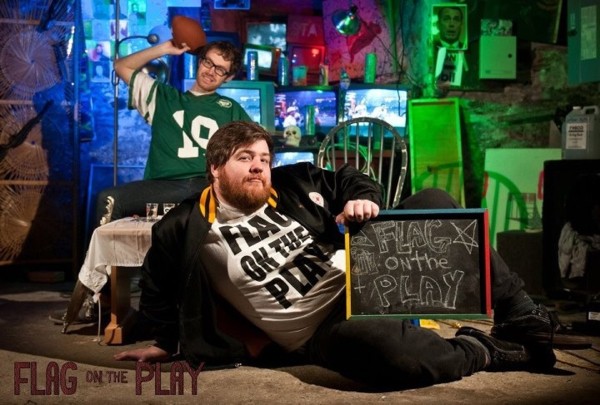 Krista Comeau
Maxin' and relaxin' with Flag On The Play

Football season equals Flag on the Play (FOTP) and I can’t tell what I’m more excited for, FOTP’s Hugh Stewart and Paul Doucette’s weekly online doses of rapid-fire sports stats or those tight pants that football players wear (Right, ladies? Who’s with me?).

Stewart and Doucette touch down (ha) at Gus’ Pub September 5 (8:30pm, $5) for their second season launch party. Expect food, a half-time performance from Stewart’s new band Stay Wavy, a live premiere of the first episode, followed by the first NFL game of the season: Dallas Cowboys vs. NY Giants. And of course, the usual musings on conspiracies and rich people that makes the web series so unique. “This season we’re focusing on core themes of time travel, friendship and the crushing ennui of late stage capitalism,” says Stewart.

Since last season’s finale, the pair have made some special appearances on the comedy circuit—Doucette reads texts on the Good Morning Tonight couch—bringing their web show out of the basement and in front of a live crowd.

“It’s a little weird, live comedy has its own wave we’re still figuring out,” says Stewart.

Though the format is evolving, the football obsession and bombast hasn’t gone anywhere.

“We know what we’re doing now and our team is back,” says Doucette. “We’re all excited to get to work. It should be like having the preseason playbook on the river.” “We’re super-popular now,” says Stewart. “So expect us to sell out pretty much immediately.”

You’ve been warned. If for some reason you get left out of the Japanese subway style crush at the door of Gus’ Pub, Stewart and Doucette are still willing to share their season picks with you.

Stewart: Stupid Tim Tebow on the New York Jets. I think the Eagles could be great this year, which means they are going to be terrible.

Doucette: Cam Newton and the Carolina Panthers are gonna light things up this season. I’m excited to see how Peyton Manning works the air traffic controller tower at the Denver Airport.