Developer of the ambitious north-end proposal says he doesn't want handouts from HRM or the province. 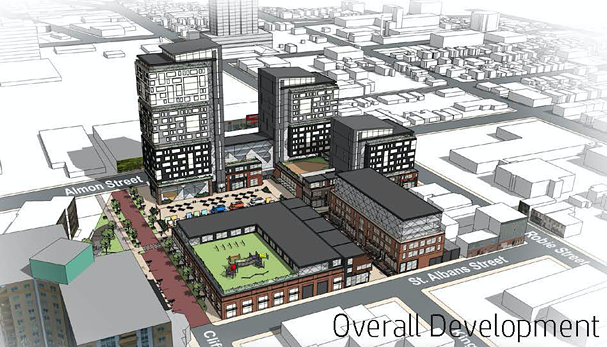 around the Midtown North development has some planning experts worried about the long-term costs of ambitious housing projects.

The residential and commercial development has begun construction on the block between Almon Street and St. Alban Street, along Robie.

It features six buildings surrounding a courtyard with commercial space on the floor levels, 60 affordable units, high-end apartments and one of the tallest residential buildings in Halifax (second to Fenwick Towers).

The ambitious project has sparked a jargon-heavy debate on Twitter about the advantages and disadvantages of tall towers, but some have deeper concerns surrounding one of the six buildings, which will be entirely dedicated to affordable housing.

But Leslie Kern, associate professor at Mount Allison University, says there are bigger concerns with the building dedicated to affordable housing.

“Long-term, the upkeep of rental buildings is a huge cost,” she says. “There might need to be some subsidy.”

Although he’s tapped into federal supports for housing, Westwood Group developer Danny Chedrawe told Metro Star Halifax recently that he didn’t want to consider financial support from the municipal government, saying “I don’t want to be a beggar sitting at the municipal level, at the provincial level looking for handouts.”

To Kern, that sounds unrealistically ambitious.

“In order to make it financially viable for the developer, they do need some support from the city and the province,” she says. “It sounds like they’re still working out what that might look like,” Kern adds, but she’s almost certain that eventually, “the developer will be trying to negotiate something with the city and province.”

Joe Gnemmi, a real estate advisor with a masters degree in planning, tells The Coast that public housing history in North America is full of cautionary tales based on ambitious projects.

“Whole neighbourhoods with intricate social fabrics were demolished and replaced with these towers,” he says. “There were originally supposed to be gardens, pathways, things that would connect the towers, which were never put in.”

It may not happen with Midtown North, but Gnemmi says he can see a lot of similar themes. Among them, “a business community that's catering to the tastes of ‘white urban professionals’ and not the population that already lives there; a landscaping design that's extremely car-friendly, to the detriment of pedestrians and sociability; and a car-centric road network that's extremely unfriendly to pedestrians.”

“They add value to the units or space a company will rent out, but there has been a long history of private security companies [being] hired by the real estate company to remove ‘undesirables’ from the place, which they have the legal right to do because they own the space.”

Kern draws comparisons to Regent Park in Toronto and Pruitt-Igoe in Saint Louis, Missouri—both ambitious housing projects that were demolished because they eventually fell into extreme disrepair, and were in-turn labelled with the high crime rates that followed. It suggests that the long-term social and financial cost of maintenance and repair can grow far beyond expectations.

These issues can still be addressed as plans evolve. Chedrawe could accept up to $50,000 per affordable unit from the but hasn’t said whether he will. The developer did not respond before deadline.