“We were outvoted by straight, cisgender members of a religious organization who deliberately attended to block our motions.” 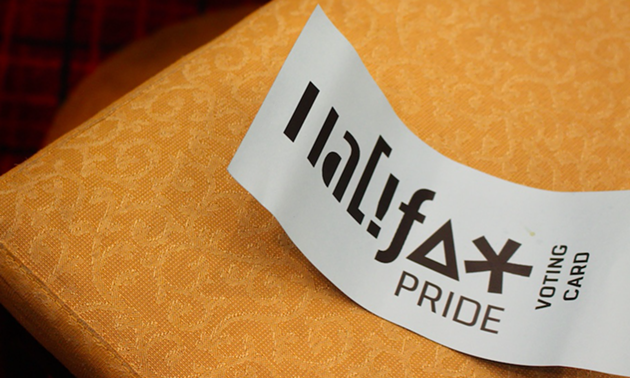 ALLIE GRAHAM
There were 106 votes for the motion, and 210 against. Five members abstained.

Pride's role in supporting the LGBTQ+ community is being called into question after a controversial anti-pinkwashing proposal was voted down at the organization's annual general meeting.

Over 300 people were in attendance for the meeting Wednesday night at the Halifax Marriott Hotel, which lasted over four hours and ended after 11pm. Halifax Pride Chair Willem Blois says that last year’s AGM only had about 30 community members attend.

A motion brought forth by the Queer Arabs of Halifax (QAH) was calling on Halifax Pride to remove “pinkwashing” materials and organizations from future festivals. Pinkwashing is a term that describes a company or government which diverts attention from its own human rights record by marketing itself as gay-friendly. The motion was in response to the presence of Size Doesn’t Matter materials mentioning Tel Aviv’s LGBTQ+ community at past Pride community fairs. The Atlantic Jewish Council called the idea anti-semitic, and drew a large, familial crowd to the meeting totalling nearly 200 people.

After an hour of debate and over 30 speakers, the contentious motion was defeated. There were 106 votes for the motion, and 210 against. Five members abstained.

About a dozen members of the Black, Indigenous and People of Colour (BIPOC) community walked out of the meeting following the vote.

I am sad that our motion did not pass. We are strong and we will keep fighting for what we believe is right.

“It’s so offensive,” said Maxine Kirshenbaum, a member of Jewish Youth for Equality who was supporting QAH and the anti-pinkwashing motion. “The fact that (the AJC) was representing the Jewish community—especially the student Jewish community in Halifax, is not actually representative of how everyone feels.”

Naomi Rosenfeld, director of the AJC, said that despite defeating the “hateful” motion, last night wasn’t a victory for the Atlantic Jewish Council.

“On the one hand, I applaud the Halifax Pride Society for voting down what is a discriminatory and really divisive resolution,” said Rosenfeld. “However, I think even allowing this policy to go to a vote caused such a rift within the community. We saw that tonight.”

Several people who identified themselves as members of the queer community said they felt it was wrong that many of those in attendance to vote were not expressly members of the LGBTQ+ community that Pride serves.

Co-chair of the Nova Scotia Rainbow Action Project (NSRAP), Emily Davidson, handed over a petition with 503 signatures in support of the QAH’s efforts to eliminate pinkwashing at Halifax Pride to the Pride board during the debate. NSRAP also presented its own motion focused on reaching out to the BIPOC community, setting guidelines for organizations that wish to participate in Pride and prioritizing LGBTQ+ organizations involved in Pride festivities and events. It was also defeated.

“I did a headcount of the room and realized that there were few remaining LGBTQ people, so I left,” said Whynacht. “I realized that the AJC membership would be electing our Pride board, too. We were outvoted by straight, cisgender members of a religious organization who deliberately attended to block our motions.”

I wonder what sort of @HalifaxPride  festival straight people will let us have next year.

Whynacht says that NSRAP has been in talks with the AJC all summer, initially reaching out to them before Pride in attempts to address QAH’s concerns with pinkwashing. Both Whynacht and Davidson say that NSRAP will need to regroup and debrief with its members. She’s unsure how much the LGBTQ+ community will want to engage with Pride moving forward.

“In 2007, their bylaws made it clear that to be a voting member at Pride you had to be a member of the community,” said Whynacht. “I'm not sure why that changed but as it stands anyone can vote to tell us how to run things.”

Blois said that Halifax Pride will continue to work with NSRAP and the QAH to make the festival more inclusive of all LGBTQ+ community members moving forward.

Later in the meeting the Pride Society resolved to move forward with a paid executive director position and will begin including pansexual in their community definition, and reflection within their mission and values.