Ever wonder why the heck you can’t have your burger cooked a little on the rare side? 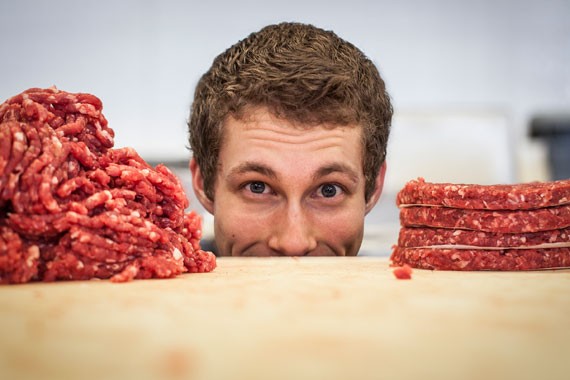 Riley Smith
Getaway Farms has its ear to the ground (beef).

Recently, I took a couple friends visiting from California out for lunch. One ordered the house burger, made from locally sourced beef and ground on site, using a variety of cuts for maximal flavour and juiciness. When the burger arrived, a lull came over the table.

"Why is my burger well-done?" asked my friend, with a bit of a grimace.

Michael Horwich can tell you. He's the director of food protection and enforcement with Department of Agriculture. "We stress that ground beef be cooked to 160 Fahrenheit," he says. That recommendation comes from Health Canada and according to Horwich, is followed by most provinces. "If there is any E. coli, it is killed at that temperature."

As to how E. coli gets into your meat—it starts in the gut. "E. coli is in the intestines of warm-blooded animals," explains Horwich. "During the slaughter process, contamination can happen and get on the carcasses."

Federally and provincially inspected plants take steps to ensure that contamination from intestinal or fecal matter doesn't contact the meat, but it can often be impacted on the outside of the hides. A mishandled carcass can lead to tainted meat.

That doesn't mean your steak has to be well-done just to avoid getting sick. "E. coli don't migrate. When you cook a steak, the bacteria lay on the outside of the tissue, which is cooked, and you can have a steak that is rare or medium-rare," explains Horwich. "However, if ground beef is made from trim that had bacteria on the surface, it is mixed in. That's why it is necessary to cook ground beef thoroughly."

Dan Joseph owns Darrell's Restaurant, where his staff cooks the burgers to 160 to 165 degrees. "With all of the things that have gone on with beef scares and recalls, we have to do it for the customers' safety," he says. "That overrides everything."

For diners who want their burgers cooked less-than-well, the main criticism is usually juiciness, or lack thereof. Joseph is sympathetic to this. As for his success in having a juicy-yet-well-done burger, he credits the certified Angus beef he purchases, regulated to maintain certain standards, including certification for kitchen service. "It's the best beef I've found," he says.

Some people believe that the issue with contamination comes from large-scale producing and processing of beef. Chris de Waal is one of them. He runs Getaway Farm and Butcher Shop and rears much of the cattle he sells. For him, traceability is a key factor, something he doesn't see with large-scale productions.

"The facility in Alberta responsible for the most recent outbreak of E. coli processes thousands of animals a day, with a large number of those animals being ground together and shipped clear across the country," de Waal says. "Those animals are raised in crowded feedlots on a steady regimen of growth hormones and drugs." He argues that ground meat from these animals runs a higher risk of cross contamination. Getaway operates on a much smaller scale, processing only a few cattle per week.

For those worried about the safety of their beef, de Waal has a litmus test. "Ask the clerk at your grocery store, or your butcher at your butcher shop, to eat some of their own ground beef raw. If they refuse, you may not want to eat it yourself."

But diners aren't looking for raw beef. Horwich says that in the end, the whole situation generally self-polices. "We do not police that in terms of running around with a meat thermometre," he says. Although serving undercooked ground beef isn't technically illegal, he says that beyond any food and safety issues, it may not be the best business practice. "If you went to a place, and you say you want it rare, they would be taking their chances to serve it to you," he says. "Not everyone gets sick, because not all burgers have E.coli. But we know that it takes relatively little bacteria to get you sick. I see it as being a little foolhardy to ask for it and have someone serve it."

*** We wanted to find out how we could possibly cook a medium burger without cooking it to the recommended 160 degrees. Simon Thibault contacted Harold McGee, noted scientist, food writer, New York Times columnist and author of On Food And Cooking: The Science And Lore Of The Kitchen on how to eat a tasty—yet safe—burger.

"Microbes are killed at temperatures above about 120," says McGee. "The higher the temperature the faster they're killed. If you heat the meat to 140 and hold it there for 15 minutes—in a warm oven, for example—then you've done as good a job as heating to 160 and serving immediately, and the meat will be done medium."

Warm up the oven kids.

Station Six pumps out the patties for Burger Week

Burger Week is on now

Halifax Burger Week is back