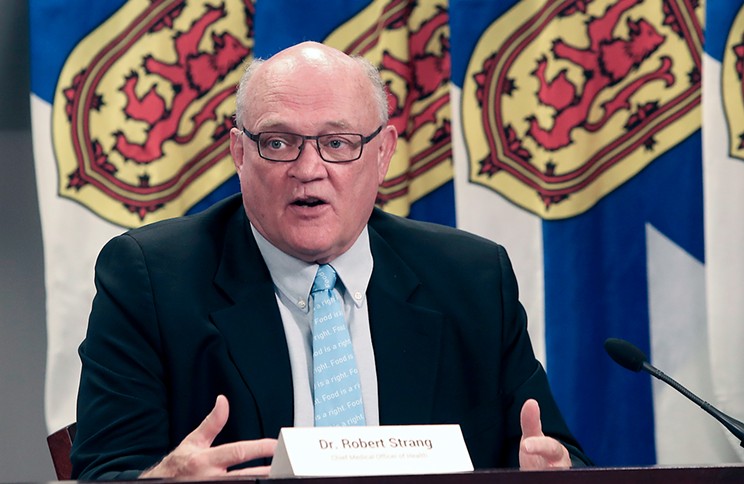 Communications Nova Scotia
“We need everyone who can to get their first and second dose as soon as possible,” Strang said Monday.

Top doctor Robert Strang confirmed Monday that Phase 4 of the COVID reopening will begin as scheduled, July 14 at 8am. On Wednesday Nova Scotians will be allowed to meet in groups of 25 at bars and restaurants—establishments that will be allowed to operate for pre-COVID hours. Dancing at the bar or on a patio will be welcomed, as long as you stick with the group you came with and keep distance from others. Retail stores and gyms can return to full capacity, and organized events outside can have 250 guests.

Phase 4 also marks the first easing of mask-wearing restrictions since implemented. Masks will no longer be required in outdoor gatherings, like farmers’ markets or at a playground, even when physical distancing isn’t possible. Kids under 12 will also be free to go maskless in child care and camps.

With late-night resto hours, considerations for dancing and changes to masking, Phase 4 appears to be the most open Nova Scotia has been since first locking down in March 2020. The difference between Phase 4 and Phase 5 are unclear, and the final phase is slated for September. The province doesn’t offer much on what’s to come on its reopening plan website, just that during Phase 5, “we start to move into the new normal of living during COVID-19, including easing public health measures,” though no measures are mentioned. “Additional plan details will be released as phase five starts.”

While the number of Nova Scotians who are at least single-dosed—according to the province’s reporting—hasn’t yet reached 75 percent of the population, the target required to enter Phase 4, at the Monday COVID briefing Strang said the milestone has actually been hit. This is largely due to 8,000 vaccinated military members who haven’t yet been included in the provincial tally.

It’s not clear when this number will be reflected in the province’s vaccine report, which currently shows 73.9 percent of our population is currently vaccinated. First-dose uptake has slowed to a crawl in Nova Scotia; at current rates it’s impossible for the province to reach 75 percent vaccinated by Wednesday without counting the 8,000 military people.

Over the last seven days of vaccination statistics reported by the province, from Monday, July 5 through Sunday, July 11, an average of about 1,500 unvaccinated people received their first dose of vaccine every day. If 1,500 people get vaccinated for the first time both today (Monday) and tomorrow (Tuesday), without counting the military group Nova Scotia would be at 74.2 percent vaccinated Wednesday morning when Phase 4 is scheduled to begin. Even with the 8,000-person military cohort, it will take 1,400 people per day getting vaccinated to be at 75 percent vaccinated by 8am Wednesday.

At the briefing, premier Iain Rankin and Strang both urged Nova Scotians to book any available second dose if they haven’t already. The premier said it seems a number of Nova Scotians are waiting for a dose of Pfizer in favour of Moderna, despite the fact that both mRNA vaccines are considered equivalent.

“We need you to get your second shot… Please don’t wait. We don’t have a large shipment of Pfizer coming in, and what we do have must be reserved for 12-to-17-year-olds,” Rankin said. Pfizer is the only vaccine currently approved by the federal regulator for people under 18, and the province is expecting 150,000 doses of it July 25.

Strang said the province is equipped with vaccine supply and administering capacity to double-vaccinate 75 percent of all Nova Scotians by the end of August, but it’s up to individuals to rebook their shots for sooner. The province added walk-in vaccine clinics in Dartmouth and Bayers Lake for this week.

“There is more than enough vaccines, more than enough available appointments. Now it’s up to Nova Scotians. We need everyone who can to get their first and second dose as soon as possible,” Strang said.

With one new case today, there are 37 active cases of COVID in Nova Scotia. Of these people three are in hospital, and two are in ICU care.

The premier, who’s announced more than 30 new funding projects since June 1, declined to say if the vaccination rate will factor into the timing of the election call—though it’s clearly imminent. Rankin did say that once the writ is dropped he will no longer appear alongside Strang at regular COVID briefings.