On My Flag Is A Burning Rag of Love, the artist makes danceable pop music with a progressive conscience. 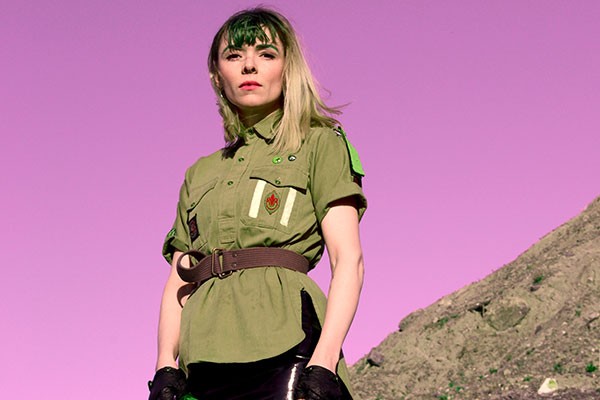 "I shake to stay awake" sings Alexandra Mackenzie, her voice cutting through a dense sea of synthesizers. That cry comes from the song "Control" off My Flag Is A Burning Rag Of Love, Mackenzie's latest art-pop romp under the name Petra Glynt.

The music of Petra Glynt—a blend of electronic production, pummelling percussion and a voice that dips between resonant vibrato and sharp yelps—resists simple definitions. But if you needed to sum it up, it'd be hard to do better than "I shake to stay awake."

The phrase represents the blend of body-moving pop music with a strong progressive conscience that's become Mackenzie's signature. When she returns to Halifax on Thursday night, she hopes to leave brains racing long after the dance floor has emptied.

My Flag arrived in September, less than a year after she released her equally charged debut LP This Trip last fall. Much like their colourful, maximalist covers, the two records sound vibrant and impossible to pin down. They run the sonic gamut from noise to punk to pop and cover a soup of subject matter: Environmental devastation; the data mining enacted by large tech companies; and what Mackenzie calls the "strange dissonance between living in reality and virtual reality."

Mackenzie's music feels of the zeitgeist, but she also defies the idea that these aesthetic inspirations can be separated from the very real, often terrifying conditions from which they emerge. Political art isn't au courant, she suggests. It's inevitable.

Mackenzie attributes her musical interests to her youth, tracing a history of aesthetic and political inspirations that conspired to create the force that Petra Glynt represents today. She describes studying classical music as a child and digging into the mechanics of melody and harmony; as a teenager, she discovered the music of Rancid and NOFX—bands whose musical and social motivations were rooted in a thrilling sense of dissent. Among the bands closest to her teenage heart was Propagandhi, who Mackenzie still remembers admiring for their message as much as their sound.

As she speaks about this musical and moral education, the picture she paints begins to sound uncannily familiar—"I could get into it and get real embarrassing," she says with a laugh. She listened to her records; she began organizing around human rights at her high school; she became a vegetarian. Hers was a classically teenage, punk coming-of-age.

She went on to study at art school, where her peers "were making really out-there music, arty, different music," she says. "I met all these people who were super visually inclined or conceptual, artistic, subversive.

"It's funny—I look back on those times and think 'Of course I'm making this music,'" she says. "When I left [art school], those punk ideologies or those aesthetics from when I was a teenager and from art school kind of came together. That became my music education."

The music that she's making now—My Flag and This Trip, plus a prolific five years' worth of Petra Glynt demos and EPs before that—sounds little like Propagandhi. But dig into the corners of her sound and the influences are there: it's fast, it's sharp, it's unwaveringly anti-establishment. In another world, pop-punk might have sounded a little less like its Y2K heyday and a little more like Petra Glynt.

"There is a huge part of me that feels like, as much as we do need positive music, music to make us feel less stressed, I do feel like there is a place for more popular music to be more politically engaged," says Mackenzie. "There are just so many things in the world to react to right now."