The Bedford restaurant gets a mulligan thanks to chef Luis Clavel, whose menu proves creative cuisine and indoor golf can coexist. 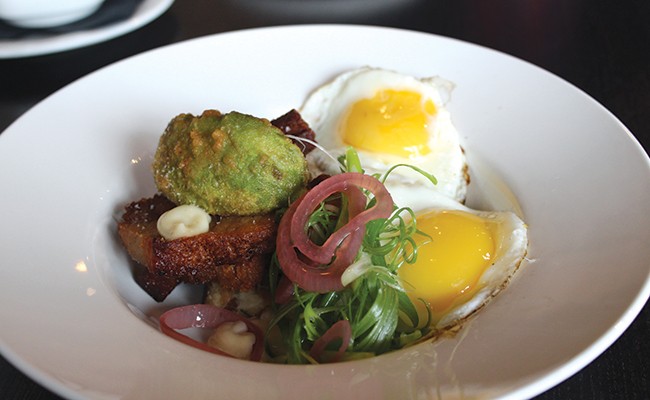 There is quite literally nothing I care less about in this world than golf. My knowledge of that sport starts and ends with a childhood viewing of Dorf on Golf, so I know there is a ball and a hole and a flag and maybe some very badly aged comedy involved. And that’s all I will ever need to know.

So, it is perhaps needless to say that when Patrons Golf & Lounge, a golf simulation business, opened a few years ago in Bedford, I absolutely did not take notice. And I probably never would have, except earlier this year the business rebranded to Patrons 902 Modern Food Fusion, a name that, while bordering on a Mad Lib, came with a new menu developed by Luis Clavel.

Nobody in Halifax’s restaurant scene swings for the fences like Clavel, who most recently was the executive chef at RCR, helping to steer last year’s openings of both Shuck and East of Grafton. And while the menu at Patrons is absolutely not what I’d expect from a restaurant tied to a golf simulation business, it is pretty much exactly what I expect from Clavel: Asian and Latin influences, bold flavour profiles and local ingredients combined in ways that emphasize creativity and technique.

The brunch menu is but packed with interest. Our server is effusive about her favourites and seems excited about the menu, which in turn makes us feel excited. We have a hard time choosing, so opt to split three dishes between two of us. I add a mimosa ($4), which, along with the house Caesar, is discounted as a part of the weekend brunch special. The sparkling wine is undetectable.

The savoury toast ($15) is the dish our server was the most excited about, and deservedly so. The brioche French toast has the texture of bread pudding, creamy and silky with just a slightly toasty edge that is covered with a gooey puddle of melted brie. The pork belly is extra-crisp, edged with crunchy, salty crackling. The fried avocado practically melts into the yolks of the sunny-side-up eggs. Bright pink rings of pickled onion add just a touch of acidity to balance everything out. It’s a super brunch.

A sweet, nutty maple-sesame glaze and whispers of heat from thinly sliced Thai chilis cut into the heaviness of the chicken and waffles ($15), another great, hearty dish. The chicken is small breaded chunks of chicken, rather than on-the-bone fried chicken, which is disappointing until you bite through the crisp coating into the juicy morsels of dark meat. Redolent threads of sweet potato and bits of bacon adding heft to the fluff of the waffles. The way the sugary and earthy notes play against one another is fantastic.

The breakfast bun with hanger steak ($13) is the least successful of the dishes we order, in part because of our insistence on ordering it even though the kitchen is out of hollandaise sauce—I remain perplexed as to why they didn’t just make more, but fully admit that we could have also skipped ordering the dish—and in part because this is where Clavel’s obsession with technique falls a little flat.
The hanger steak is cooked beautifully. As are the two poached eggs, cooked a perfect medium. But the steamed buns have a slightly rubbery edge to them as if they’d been microwaved instead of ; as the most interesting component of this play on Eggs Benedict, it is a weak foundation. The real problem here, though, is truffle powder. This is a frustratingly empty flourish, a flavourless powder that only finds merit in the behind it. I don’t like culinary showmanship that has no real payoff on the plate. To me, that is a swing and a miss.

While Clavel doesn’t knock it out of the park every time, it’s really just exciting to see what happens when he’s on the field. And even though he was really just the coach at Patrons, he did...whatever it is that coaches do to make a good team. Look, I don’t know anything about baseball either, OK? I’ll watch Dorf on Baseball and get back to you.

Write your own review of Patrons 902 here.

First Look: inside The Watch That Ends The Night’s cool Canadiana