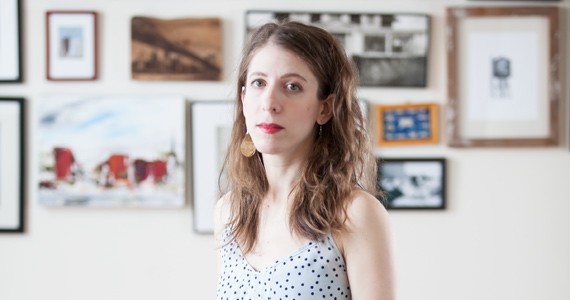 Gabrielle Papillon
May 2, The Company House

"I was reading the newspaper a lot and I was frigging mad," says musician Gabrielle Papillon about her recent lyrical influences. "Newspapers are depressing." Girl, you said it. Papillon's latest album, the swirling and diverse The Tempest of Old, released last Tuesday, is darker than anything else she's written to date. Her four previous releases have the same emotive and beautiful songs, but Tempest bumps it up a notch, adding horns, strings, a passel of musical talent—like Jenn Grant, Kim Harris, Carmel Mikol, Stewart Legere, Kinley Dowling and Kev Corbett—as well as touches of gothic darkness that's particular to the pains of the modern world.

This latest album is the closest thing to the music inside Papillon's head.

After coming home from touring the ECMA-nominated Little Bug across the country in 2013, Papillon found herself in a rare situation. She had free time, and eventually, thanks to the powers that be at FACTOR, she had money. "I was home-bound all of a sudden," Papillon says. "It was nice, I hadn't taken time off of the road for three years. My guitars were around, I played with different tunings and the album wrote itself. I was at home and relaxed, reading books and newspapers. I think the different tunings allowed me to write something darker. That seemed more natural to me in the sense that I listened to a lot of dark music—big and melodramatic music growing up like Björk and Radiohead, not dark like 'I'm going to kill myself'—I listened to a lot of grunge music and film scores, I loved The Last of the Mohicans and Braveheart soundtracks. Braveheart's a terrible movie, but a good soundtrack.

"It happened really naturally, I wrote the grant, and I called [Echo Lake's] Dan Ledwell and asked him if he'd produce it. He said yeah. You never know, he could have been like, 'No, [Little Bug] was terrible!'"

She wrote the songs in pairs—that's just how they came. Two songs, "Come and Gone" and "This Light Will Not Burn," were written right before she went into Ledwell's studio. In her words, the recording process was "a big production—a lot of musicians, big scenes and big ideas. I lost my voice almost immediately." After she regained it, she recorded vocals quickly, in two or three evenings. Not that she sounds rushed, "Got You Well" in particular is warm and bluesy—a "dirty swamp song" by her description.

The Tempest tour is a tidy affair, a concentrated look at some of Papillon's favourite stops, a run during East Coast Music Week in St. John's, a Halifax date May 2 at The Company House and an eight-date stint in the UK based around Brighton's The Great Escape festival. "I want to build momentum, there's so much stuff out there that you'll release a record and four months later people will be saying, 'Oh, you have a new album?' People still think [2012's] Little Bug is new!"

Papillon cites her developing skills for Tempest's cinematic qualities. "I've played guitar for 20 years but only figured out how to play for me in the last six years. With [2011's] The Currency of Poetry and Little Bug, I wrote simple songs with a lot of harmonies, but I heard much more orchestral things in my head. Sometimes the melody I sing is me hearing piano in my head," she says. "Big themes and drama—it's always been there but I finally knew how to do it. The pieces fell into place, and I knew how to write that way. The economic reality is that I had a big grant and I had the means to hire string and horn players."

As with every album of Papillon's, there's the ubiquitous song about lighthouses, as a tribute to her great-great-grandfather, a lighthouse keeper who drowned trying to fetch a doctor for his wife while she gave birth. On The Tempest of Old, "This Light Will Not Burn" is a relatively unadorned affair, Papillon's clear voice sounding both pragmatic and melancholy. "They just appear all of a sudden," she says. "I'm writing and all of a sudden it's about a lighthouse. I don't sit down to write with something in mind. I don't know how people do that, it seems really dishonest."

The titular tempest is both a subtle nod to Papillon's favourite Shakespeare play—"It's so different and more fairytale-like than anything else he did, it's really dark and magical"—and a summation of what mood she feels defines the record. A lyric from "Then Will I"—"when every wild thing goes to ground, unleash the tempest of old on the shadows of the living" demonstrates a particular tone that Papillon feels defines the album. The song itself explores the idea of something big hovering just beyond the horizon.

"How can you not just feel like 'What is happening here?'" says Papillon, about the world in general. "I mean, we just had this ridiculous snowstorm, there's so much going on in the world. The first lyrics I wrote were 'when I look back at the world with these old eyes and broken hands'—I pictured an old woman or ghost looking at the wreckage of world. A storm's coming and 'Then Will I' is the aftermath."

Despite being influenced by the ever-cheerful front page news, Tempest is varied. The album spans folk, roots and blues styles, touches of wide-sweeping orchestral arrangements and country twang adding a striking amount of variety. Papillon's own sensitivity and love of dramatic flair shows through on this album more than any other.

A punk with a burning love of film scores, "I was a weird kid. I hung out with skateboarders and played in punk bands but also went to ballet every day," Papillon admits. "I loved musical theatre, my siblings and I would tap dance in the kitchen and my parents listened to classical music. We weren't allowed to watch a bunch of TV so I read a lot of books, which I think helps nurture imagination. I'm also a really sensitive person, I think this feeling for drama is really innate."