Rana Zaman at a Pro-Palestinian Rally on the waterfront. ROBERT DEVET NS ADVOCATE

The Canadian Civil Liberties Association protests the way these protesters were treated.

After one of the worst years of my life—my dad, the glue of our family, passed away in September and my elderly mom, sister and her daughter, both with special needs, moved in with me—I had pulled away from social media and everyone else because of all the family issues and my new responsibilities.

I had been in a state of depression, but was jolted out of it when I saw the attacks on peaceful, shoeless worshippers at Al Aqsa mosque in Jerusalem during Ramadan, the holiest month for Muslims.

On witnessing the atrocities of war and colonialism in the digital age: When violence and trauma travel through digital networks, it’s our responsibility to make solidarity and resistance travel the same way.

My shock turned to disbelief when I saw further violence against peaceful protesters who were trying to support the residents of Sheikh Jarrah from being unlawfully evicted from their homes during a pandemic. Horrified by the images of the bombing and killing of children and civilians in Gaza, I felt strongly motivated to do something.

That something became an educational forum on May 15 with amazing speakers to mark the anniversary of the Nakba and educate people in Halifax about the history of Palestine. Within four days myself, Free Palestine Halifax and the Atlantic Canada Palestinian Society had organized and hosted the event—more than 100 people attended, many saying “it was informative and emotional.”

At the same time, the ACPS, in collaboration with community youth members, managed to put together a COVID-19-safe car rally for the same day.

May 15th marks the anniversary of the Nakba, or “Catastrophe” of 1948. That day 73 years ago symbolizes when 750,000 Palestinians were forcibly removed from their homes and their land was stolen by what is called now an Apartheid State of Israel.

Many jumped at the opportunity to come out to show solidarity for family, friends and loved ones who were suffering and dying in Gaza, East Jerusalem, the West Bank and other areas. 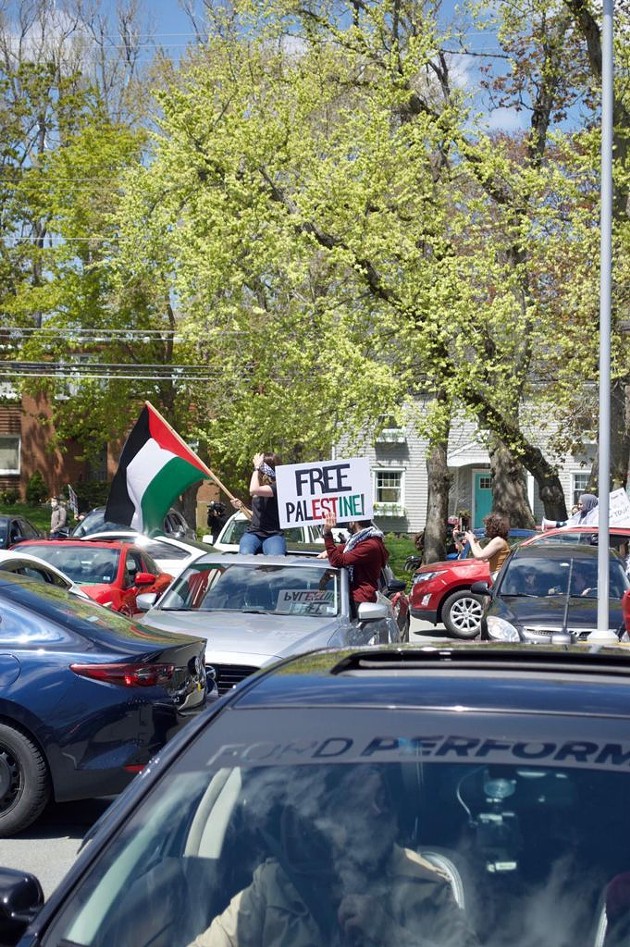 When my niece and I joined the car rally, the parking lot was half full and police were off to one side quietly watching. It was so wonderful to be out there, seeing old and new faces after months of isolation. Volunteers had gloves, masks and disinfectants available while giving out instructions about following COVID-19 protocol.

But rather than protecting public safety, the police who had been off to the side arrested individuals, bringing them out of their vehicles for honking their horns under the Motor Vehicle Act, and arresting and ticketing others under the Emergency Act, or Public Health Act. I myself was yelled at but not ticketed for honking.

The Canadian Civil Liberties Association recently published a statement in regard to the injustices inflicted upon the youth demonstrating for their families and friends, who are facing violent attacks and bombardment of their homes.

The CCLA’s statement explained how the injunction the province obtained on May 14 was sought to deal with anti-mask and anti-lockdown protests, but also captured any other type of protests and “this past weekend resulted in the ticketing of individuals participating in a driving protest in support of Palestinian rights.” It describes the order as “patently overbroad; a two-handed axe where a scalpel would have sufficed.”

“Going forward,” the statement continues, “the injunction could be used to justify arresting any number of protesters marching in support of any number of causes, regardless of whether the protesters respect distancing rules or pose any threat to public health,” adding that this “is a severe violation of the freedoms that are fundamental to a functioning democracy.”

Because of the over-reaching powers this injunction and the state of emergency has awarded police, a well-planned rally that included a drive through the city to raise awareness was turned into a chaotic mess because of interference from police officers.

To add insult to injury, police ticketed many people at the parking lot who were in their cars, but not the white, maskless man who claimed to be Jewish and was threatening, harassing, swearing and spitting at participants. He was simply shooed away by police.

Palestinians who were protesting the abusive policing of their countrymen ended up being grossly policed here.

Palestinians were and are forced from their generational homes out into the street. Their beloved land has been stolen from them, they’re forced to live under occupation, oppressed, with their human rights violated, their children abducted by the military, tortured, abused, shot in the eye, head, knee, maimed, crippled and murdered.

They are forced to live in the largest open-air prison in the world under an apartheid regime that sees all Palestinians as the enemy and their children as “little snakes.”

Is it any wonder then why the Palestinians would fight back? Wouldn’t you?

Is it any surprise why I, like so many others, felt compelled to speak up, shout, honk and disrupt to jolt others out of their complacency?

If the two hours of harmless noise bothered you, then just imagine how the Palestinians are dealing with bombs, death and destruction in Gaza.

PS: On a side note, shame on CTV honchos who axed my interview for fear of controversy and enabling selective rhetoric!

Rana Zaman is an award-winning social activist who works with several different organizations working towards a better and just community. She can be found on Facebook, Twitter and Instagram.

Kathy Symington’s discrimination complaint will be heard in full