Paintings, by the numbers: An exploration of Cliff Eyland's Library Cards

We break down what makes the Central Library's giant mixed-media work so wonderful.

Adam Mork
The best way to experience Library Cards? From a distance—and then, from incredibly close up.
At some point when you walk into the Halifax Central Library, you’ll feel your neck crane, as if it’s working independently of the rest of you. Your head will tilt, following suit. Your eyes will climb, eager to not be left behind. Your back might even bow under all the upward shifts, under the need to see higher and higher up the massive wall behind the circulation desk. If it feels like your centre of gravity is moving, that’s because it is—but it’s worth it to get your greedy fill of what that wall holds: Cliff Eyland’s biggest masterpiece, Library Cards.

Composed of 5000 unique paintings, collages and drawings, Eyland’s mixed-media exhibition was the winner of a public art commission tied with the opening of Halifax Central Library. “What’s really amazing is Cliff was born in Nova Scotia,” says Karen Dahl, senior manager of programming and community engagement at Halifax Public Libraries. “It was kind of thrilling when they chose someone who had a personal connection to our city.”

Eyland's was the sort of work made for public consumption, a buffet of details ready to feed as many eyes as could take it in. "Cliff Eyland loved libraries. It was a very deep and enduring passion for him," Dahl adds. It makes sense, then, that many of the artist's most notable works can be found in these community hubs—including his 2005 untitled installation at Winnipeg's Millenium Library and a 600-painting work at the Edmonton Public Library. He also had a regularly updated work on display at New York's The New School's library from 1997 until 2005.

There’s good reason why Dahl says Library Cards is the library's "welcome image”: In the six years since its installation, the piece has engaged viewers daily. "Together, those paintings, I think they greet the community when they enter Central Library—just a vibrant feast of colour, pattern and design and that’s your first impression," she adds. "And then of course, up close it’s a whole different experience: There’s this opportunity for limitless discovery."

Here, to both celebrate the re-opening of Halifax’s libraries this month and to honour Cliff Eyland, who passed away on May 16, we break down what makes this grand scale collection of miniature works so awe-inspiring:

1The first thing you'll notice about Eyland's opus is the dozens of small, stand-alone parts it's comprised of: "The blocks themselves—little rectangular blocks that compose the Library Cards collection—those are three by five, which was the size of the old catalogue cards historically used in libraries," Dahl explains. "And it’s also the size of a modern cellphone. So there’s this juxtaposition between the old way of storing and recording and cataloguing information and new, digital ways to access the world of information. So even in his very composition, those shapes are intentional." 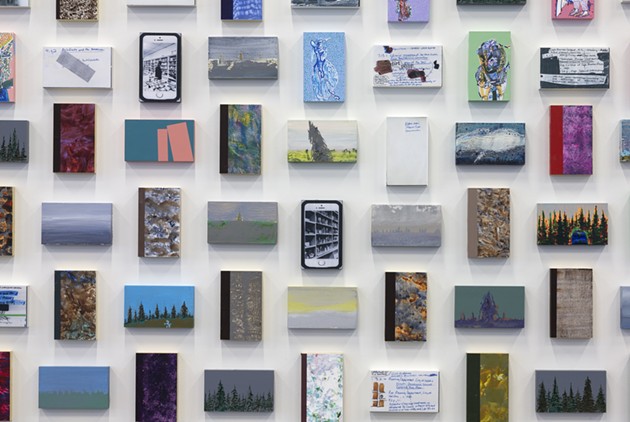 2 Aside from playing with themes of knowledge transmission and recording, Eyland's work is heavily tied to the place it's in. This is clear in the sprinkling of local connections throughout—like the pieces in Library Cards that are paintings of Nova Scotian landscapes or collaged bits of historic catalogue records. "They’re book covers and cell phones and photographs and these really cool three-dimensional collages of found objects," Dahl says. "He’s really mixing up history and culture and possibility all in one place."

Adam Mork
Taking on an almost patchwork quality from afar, Eyeland's work reminds the viewer of Pointillism—looking like one thing up close and something else farther away.
3 "I proposed a number of paintings out of thin air," Eyland said to NSCAD in 2015 when explaining why Library Cards features 5,000 items. "I wanted to make a lot of works, so I thought 5,000 might be a good number." He adds that, in the end, he produced over 5,000 pieces so he could "pick and choose the best" for the installation—a process that took about a month. "We forget how few public places there are," Eyland said. "In any case, libraries are perfect contemplative places for art."

Correction: An earlier version of this article contained a quote saying Eyland was born in Dartmouth; The artist was actually born in Halifax ("Interestingly, he was born on the fourth floor of the Infirmary where the library now stands", says a family member). The Coast regrets the error.