The Coast
Signs had a wide variety of messages, from desperate calls for climate action to love letters to the planet, messages on specific issues like the sale of Owls Provincial Park or attention-graving pop culture references.

This year's school strike for climate in Halifax had a strong emphasis on Indigenous sovereignty over environmental issues in Canada.

Groups of young protesters gathered at Victoria Park around noon today, September 24, for this year’s School Strike for Climate, a movement that started in 2019, with large protests around the world demanding action against climate change. Halifax had its own climate strike in 2019, and the COVID-19 pandemic didn’t stop protesters from a physically distanced rally in 2020. This year’s loud, dynamic version felt a bit more like the one before the pandemic times, except that most protesters were wearing masks at all times.

Over 1,000 people gathered at Victoria Park, warming up with chants such as "we are unstoppable, another world is possible" or the concise and energetic “we want action” before speakers took the mic. “Climate justice cannot exist without Indigenous sovereignty,” said 19-year-old Sadie Queen, one of the school strike organizers.

Oriol Salvador/The Coast
In the middle,19-year-old Sadie Queen, one of the strike organizers, speaks to the crowd in Victoria Park minutes before the march starts.

Indigenous rights and sovereignty over environmental issues had a strong presence throughout the protest. "As an Indigenous person, climate change is related with colonialism and capitalism,” said Sophia Sidarous, a speaker from the Metepenagiag First Nation.

Sidarous referenced the path to truth and reconciliation as Canada prepares to observe this new national holiday on September 30. "We will never never reconcile with an oppressive state," Sidarous said, while asking the state of Canada to understand the urge for climate action and for better understanding of Indigenous rights and First Nations' relationship with the land.

"The climate is changing, fast, but if we put the life of many above profit of a few, we can do critical damage control," said Jane Elliott, 15, another organizer of today's protest.

After the speakers in Victoria Park, the march started walking up South Park Street. In an unperfect rectangle, protesters walked down Sackville Street, left on Brunswick, down Duke and right on Hollis for a quick stop at the provincial legislature. After that, they kept going south on Hollis en route to surrounding the Nova Scotia Power headquarters on Lower Water, before heading up Morris Street to end with some closing remarks and a little drumming dance party back at Victoria Park.

Oriol Salvador/The Coast
The Provincial House in Hollis Street was one of the key stops in the march around downtown Halifax.

Of the hundreds of people gathered today, most of them were teenagers. There were also children accompanied by adults, as well as young adults and elders marching in solidarity. Protesters also saw the solidarity of some car drivers, who were stopped by police controlling traffic as protesters took sidewalks, half the road or the entire road, depending on the street.

There were also many red shirts from volunteers gathering support against the sale of Owls Provincial Park. No politician on a municipal, provincial or federal level made themselves noticed in the crowd.

Oriol Salvador/The Coast
Protesters stayed for about ten minutes in front of the Nova Scotia Power headquarters by the Halifax waterfront, chanting against the privately owned electricity provider.

Both Province House and the headquarters of Nova Scotia Power were clear targets where protesters wanted their voices to be heard. Shouts of “Fuck NS Power” were among the chants that rang out for more than 10 minutes outside the building near the waterfront.

Closing the march back at Victoria Park, 15-year-old organizer Amilia Penney-Crocker left homework to do for the young protesters: “Talk to your parents, grandparents and everyone you know, tell them this is a crisis we have to stop." 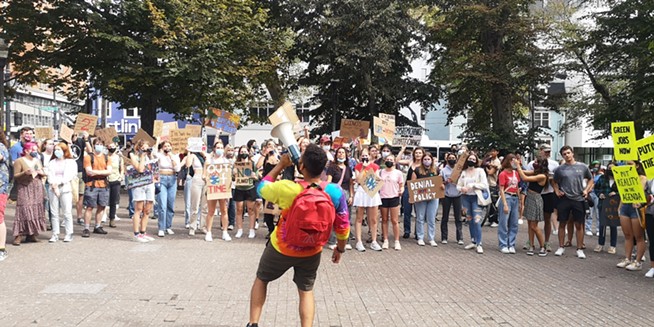 Oriol Salvador/The Coast
After an hour marching, protesters still gathered energy back at Victoria Park for a few more chants, listen to final remarks and have a short drumming dance party.

The organizers also invited attendees to mark their calendars for another strike on October 22, with details to be announced.

Here's a photo collection of some of the signs in the protest:

2021 School Strike for Climate in Halifax