Nova Scotia boasts 7,500 kilometres of coastline, and almost that number of sea-adventure packages for the unsuspecting traveller to choose from. "Canada's Ocean Playground," indeed. But what about overland adventure? Head inland from any point along our coast and you're liable to find yourself rubbing up against 300-million-year-old fossils at Joggins Cliffs, losing your boots in the mud flats on the Bay of Fundy, foraging for wild mushrooms in the Tobeatic Wilderness Area or coming face-to-face with a curious moose in the highlands of Cape Breton Island. With travel options as varied as the topography itself, where to begin your adventure? Why, with the 21st-century version of the buried-treasure hunt, of course.

Geocaching made its Canadian debut in 2001 right here in Nova Scotia, in East River only 30 minutes from Halifax. The basics of the game are simple enough: Caches, or stores, of tiny treasures (family-friendly only, please) are stashed in secret nooks and crannies all over the world---underwater, up a tree, on a ferry, in a library. Latitude and longitude co-ordinates, along with a couple of hints, are then posted to a website for anyone with access to the internet, a GPS and a good sense of adventure to download. Once you've found a cache, proper game etiquette dictates leaving a little something if you take a little something, writing a note for posterity in the cache's logbook and carefully replacing the package for the next visitor. Swing by atlanticgeocaching.com for co-ordinates in and around the region and set out for this summer's Cape Chignecto hike or Brier Island whale-watching holiday with a bunch of secret treasures in hand.

If hunting the cache hidden at Horseshoe Turn Falls in Cape George is not enough to satiate your thirst for waterfalls, give Ryan Barry at Great EARTH Expeditions a call (greatearthexpeditions.com, 902-223-2409). Now in its second season of operation, this Halifax-based eco-tourism outfit aims to take you places you never knew existed---including Barry's first choice of best-kept secrets, the breathtaking North River Falls gorge. The day-long Country Waterfalls Charm tour (one of many on offer) will cost a hundred bucks and a good pair of walking shoes. Groups are kept to a maximum of six so that individual adventurers can be catered to---if you're into caving, or tubing down the Gaspereau River, Barry's only too happy to oblige. Transport, lunch and a free giftare included.

Though born and raised in the Annapolis Valley, Eben Fry has spent every summer since he was a little kid scraping his knees in and around Boutilier's Cove. His contagious energy and passion for the environment naturally led to the birth of EcoConcierge (902-823-2160, ecoconcierge.ca) as a way of offering visitors to the area and guests of Oceanstone Inn & Cottages a personalized day out. So, whether it's snorkeling in tidal pools for an up-close encounter with the local marine life, hiking the coastal barrens of Polly's Cove with butterfly net in hand or paddling at sunset, Fry is your man for a custom-built, anything-goes adventure in St. Margarets Bay.

Upping the hike ante is Atlantic Canada Safaris (atlanticcanadasafaris.com, 902-455-3595) with its nine-day trek through not one, but two Atlantic national parks: the Cape Breton Highlands and Newfoundland's Gros Morne. Both boast superb coastal hiking trails teeming with wildlife and mountain vistas at every turn. The Cape Breton leg includes a drive along the lovely Cabot Trail; in Newfoundland, rest your tired dogs while cruising a landlocked fjord "cradled between precipitous cliffs and adorned with spectacular waterfalls." Prices include lodging, van and ferry transportation, the boat tour and all meals.

For the hardcore cyclists among us, industry pioneer Atlantic Canada Cycling (atlanticcanadacycling.com, 902-423-BIKE) has added its own nine-day adventure to this year's roster: a race around the Bay of Fundy. ACC founder Gary Conrod's notsure he hasn't taken too much on in attempting to circle the entire inner basin in under 10 days. So dig out those padded shorts,dust off your tent and prove Conrod wrong. The tour sets off July 19. Support vehicles will be on hand to carry your gear and change tires.

If luxury bicycle-adventuring is more your style, Dana Gallant of Hubbards-based Pedal & Sea Adventures (pedalandseaadventures.com, 1-877-777-5699) is the man to talk to. Sign up for Gallant's week-long tour of the Cabot Trail and take in the beauty of this region as it was meant to be---unencumbered by all those niggly travel details. After a day of winding your way through glorious valleys and along expansive coastline---with the odd break for fresh-oyster feasting or a round of golf---know that everything will have been taken care of for you and enjoy the well-earned pampering that only the best inns and B&Bs can offer.

Rather your two wheels come with a motor? George O'Brien will measure you for a Harley at Vineland Classic Motorcycle Tours (902-425-8428) and offers a range of tours to choose from, both with or without guide. Choose the aptly named Wet & Wild, Whales & Wine adventure and, over five days, raft the Bay of Fundy, look for whales, learn a bit of history and taste local wines, all between twisty rides on coast-hugging roads.

Widely believed to have the best coastal gliding terrain in eastern North America, with no fewer than 14 launch sites, the area around Parrsboro is not to be missed. Though you're always at the mercy of the elements, Michael Fuller, founder of Pegasus Paragliding (pegasusparagliding.com, 902-254-2972), guarantees you'll be seduced not only by the sport itself, but by this particularly spectacular bit of the coast. Atlantic Canada's only paragliding school, Pegasus also offers the lay-adventurer the opportunity to take to the skies through its tandem flights with experienced pilots and instructors. Experience flying free without having to do any of the hard work yourself.

If you've got cash rather than time to spare, let Vision Air Services (visionairhelicopters.ca, 902-873-3488) take you on a heli-adventure, whether to check out the port of Halifax, or the salt marshes of the eastern shore. Alternatively, head to the land of the Silver Dart and climb aboard a Cessna C-172 for a flying adventure with Crown Jewel Resort Ranch (crownjewelresort.com, 902-295-1096). Discover those parts of Cape Breton no road will reach while working on your aerobatics or low-altitude navigation.

Back at the resort, let Nahman Korem introduce you to one of his mighty Fjord horses. Crown Jewel's trails are designed for the experienced rider, not the faint-of-heart. Trained to respond to voice commands, the Fjords negotiate the thick woods, the narrow and steep hills, the mud, the swamps and the water crossings, all without the use of bridles, bits or blinkers. For those of you interested in learning to train bitless horses, check out the resort's five-night, four-day package. Inexperienced riders are also welcome and will be led.

Due to prohibitive insurance costs, you're not likely to find someone willing to take you out on a climbing or bouldering adventure in any official capacity. But that doesn't mean there aren't great spots for creating your own adventure around the province. Check in with Climb Nova Scotia (climbnovascotia.ca) for details and information on the upcoming Boulderfest.

For the Sunday adventurer, East Coast Outfitters, best-known for its sea-kayaking tours, have added a workshop series to its already impressive line-up, combining paddling with regional expert-run workshops on everything from to yoga for kayakers to seascape photography and gourmet camp cooking. Visit eastcoastoutfitters.net or call 1-877-852-2567 for details on this, or any of ECO's adventures.

Cap off your holidays with an adventure package of the imbibing sort. Co-founded by sommeliers Sean Buckland and Mark DeWolf, the award-winning Valley Wine Tours (valleywinetours.ca, 902-425-9999) was launched to coincide with the 2004 harvest. This summer, its Wine Enthusiast tour will take to the impressive vineyards of the Annapolis Valley for guided wanders through three wineries, an artisanal cheese tasting and a two-course gourmet lunch with wine pairings. Transport is, of course, provided. Or, for another gourmet adventure, head to Trout Point Lodge (902-761-2142, troutpoint.com) in the enchanting Tobeatic Wilderness Area and sign up for a culinary vacation with its Institute of Sustainable Gastronomy. Take a cheese masterclass, learn traditional beer-making techniques, forage for a wild mushroom feast, smoke that fish you just caught---and then work it all off wandering the estate's 100 acres of woodland paths.

Closer to home, if McNabs Island is calling you, give Captain Red Beard a holler on 902-465-4563. The good captain will ferry you to and from the island and set you up with any sort of tour you're looking for.

Halifax Walking Tour: A peninsula of parks and trees 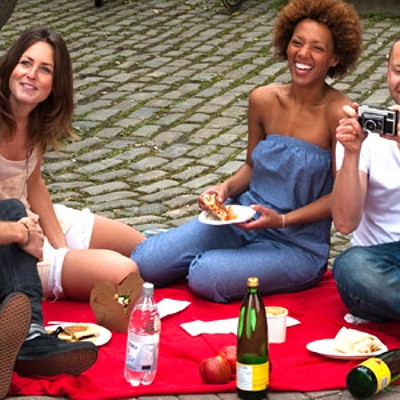