After walking across Pont Jacques Cartier at 1am and getting lost in downtown Montreal, Ashley LeBlanc goes back for round two of Osheaga, this time in the rain...YEAH!

Sunday began with rain, continued with rain, and ended with sun. We showed up to the festival in time to catch someone we had been looking forward to, Miike Snow. The band is comprised of singer/songwriter Andrew Wyatt and producing team Bloodshy & Avant. Six men dressed in black filled the stage to create a sound that could be describe as techno-tronic Genesis. Midway through the set, Wyatt unzips his coat to reveal a garbage-bag tank top to match the poncho-covered audience he is singing to. Our feet ache from the day before so we stick them in mud puddles to alleviate pain. 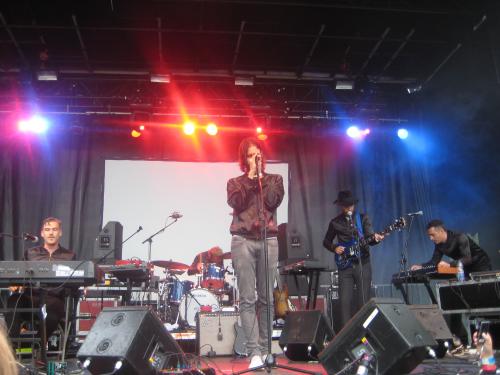 Off to the main stage is Manchester duo The Ting Tings. Definite crowd pleasers, Jules De Martino and Katie Wright charmed their way into Montreal’s hearts with their on stage chemistry and energy. They played songs from their 2008 release We Started Nothing, including singles “Shut up and let me go” and “That’s not my name.”

We left The Ting Tings early to check out a band that was recently in Halifax playing Virginfest. The Arkells from Hamilton know how to rock a stage. Spotted after crossing the Jacque Cartier bridge the night prior was lead singer Max Kerman taking a leak on a tree.

I wandered over to the other side stage to see what Parisien electo rockers Naïve New Beaters were all about. I managed to catch their last song “Can’t Choose” and immediately wished I had caught more of their set as I walked into a crowd of jumping mud dancers. They shouted out something about poutine and it made me really hungry for one, too bad they were $7.

Rufus Wainwright was next on the list. He played a solo set with his piano and guitar. Oh, and his mom Kate McGarrigle. We took a break on the hill and let Rufus serenade us all the while discussing how amazing he would be at the Rebecca Cohn.

Cursive took the stage around 6:30. During the set I found myself trapped between a mob of tribal mud dancers and a girl who would not stop flexing her arms. Back on over at the main stage were The Decemberists from Portland, Oregon. Was singer Rachel Blumberg wearing a wedding dress? Yes she was. As their albums seem to flow like a story from beginning to end, it was a bit strange hearing the songs all mixed up.

Heading over to Tiga, it started to rain again. By the time we got to the stage, it was a full on downpour. I honestly don’t remember when it last rained that hard. The weather however didn’t stop the crowd. They danced even more as their umbrellas broke in the wind. 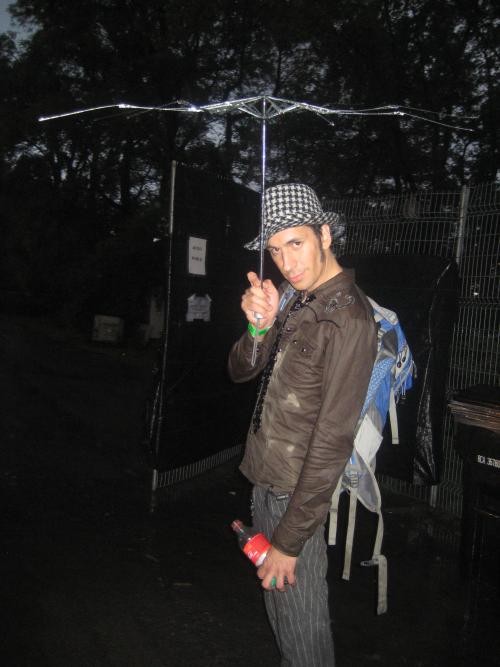 The Arctic Monkeys were great. They were the only band that managed to create a mosh pit and umbrella-holding crowd surfers. As the band finished up their hit single “I bet that you look good on the dancefloor,” a girl walked by screaming, “J’ai aller moshing, yo!”

As the Monkeys finished up their set, the Yeah Yeah Yeahs were making the crowd antsy. People were overheard talking about which songs they would open with and what Karen O would be wearing. They opened the set with “Heads Will Roll” off their latest album It’s Blitz. The crowd got extra rowdy as they sang along to “Gold Lion” and waved their lighters to “Maps”.

We decided to leave half way through the Yeah Yeah Yeahs’ set to check out Toronto electro duo Crystal Castles who are known for their crazy on stage antics. We arrived just as they were supposed to begin and were told that the band was stuck in Ottawa and had just arrived at the Montreal airport. They were on their way, through traffic, and would arrive shortly. We went back to the main tent and caught the rest of the Yeah Yeah Yeahs’ set. A swarm of people then ran through the woods to try to catch Crystal Castles. Luckily, they had just started when we arrived, opening with “Crimewave” and “Alice Practice.” The crowd transformed into a giant wet muddy dancing mess. Unfortunately, their sound was cut after two songs. They pleaded to play another song and were successful but had the lights turned on after their three-song set. 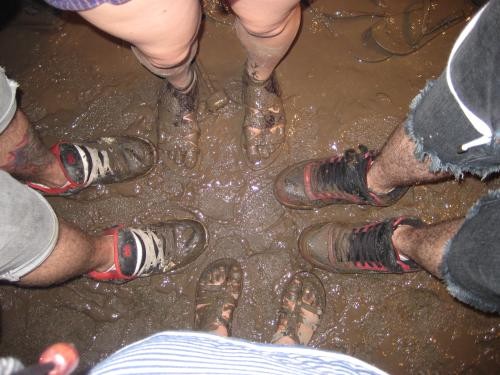 We had better luck getting home this time. We caught the first subway and stopped to get poutine at a local Montreal chain. It was only midnight but felt like 5am as we arrived and saw how much mud was on our clothes and shoes. Leaving the next morning was not fun, neither was the 14-hour drive back home.

All in all, Osheaga was a great time. They succeed in creating diversity in the genres they bring and the showcasing of newer artists. The not so great parts like over charged food, insane line ups, and masses of annoying drunk people are to be expected at any huge festival.