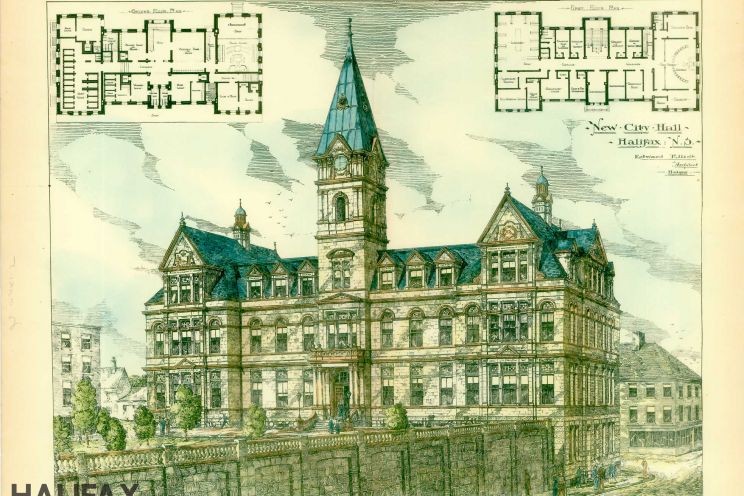 Halifax Regional Municipality
Sketch of City Hall in 1887, when the original bell might have been in the tower.

Bells will be ringing again from City Hall this weekend, after roughly 100 years of silence. Two bronze bells are scheduled to be installed tomorrow (Saturday, October 30) in the bell tower on top of Halifax City Hall, and their chimes will be heard for the first time downtown at Grand Parade Square in the early-to-mid afternoon. (The plan is weather-dependent; it was already postponed once this week due to high winds.)

City Hall apparently had just a single bell originally, but Halifax Regional Municipality has two ancient bells in its possession—one from City Hall, the other maybe from something called Customs House. It’s unclear which bell is which, but by putting them both in the tower, HRM has covered its bases to be able to say the original bell is returning to City Hall. And by the way, one of the bells was probably made by the same English company that made the initial Big Ben.


Although firm dates have been lost to time, archival evidence suggests Halifax got its first bell in the late 1800s, and sometime after that it was pealing from the bell tower before getting damaged in the 1917 Halifax Explosion. HRM spokesperson Klara Needler explained by email that following its removal, in the years after the explosion, there was no bell or sound system installed in the bell tower. All was silent until an electronic sound system was installed in 1995, playing a recording of the Westminster Chime to the present day.

In October 2019, the Dartmouth contractor Black & McDonald was awarded the tender for Reinstate Bells—Halifax City Hall, for a total amount of $71,000. The tender called for installing the bells and replacing the clocks at City Hall.

By August last year, phase one of this project, involving preparation work, was completed. On the Halloween weekend, as part of phase two of this project, bell technicians from the Verdin Company in Ontario will be onsite for the installation.

A crane will be located in front of City Hall on Saturday to lift the bells to the tower. The side entrance to the building will be used as the main entrance, while the front entrance is closed. The installation of the bells is expected to be completed that same day.

The bells will be rung by an automated clock and striker system that was installed in the United States, when the bells were in Cincinnati, Ohio from November 2019 to April 2020. They will be programmed to chime on the quarter hour, half hour and hour, so downtown commuters can expect an additional time alert, besides the noon cannon, from now on.