This weekend at the Sir James Dunn Theatre, experience the big sounds of opera classics, without all of the stereotypes 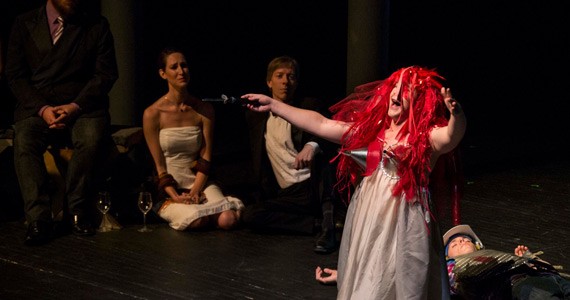 Halifax Summer Opera performances aren't only for the operatic fanatic.

These days, while the rest of campus is shrouded in mid-summer silence, the theatres and subterranean corridors of the Dalhousie Arts Centre are a hive of activity.

In mid-July, 70 young musicians and directors from across Canada descended on Halifax for the Halifax Summer Opera Workshop, a four-week program that culminates in a week-and-a-half of performances ending August 12: Carmen, A Midsummer Night's Dream and four one-act operas. For Dr. Anthony Radford, director of the workshop's production of Carmen---which debuted in 1875 as a flop, yet went on the become one of the most frequently performed examples of the genre---the workshop is a window onto the art form, showcasing some of its best-beloved pieces while hinting at its future.

"For the audience, they get to see what's going on in the world of opera today" Radford says. "That's kind of a cool thing---that you don't need to go to the big cities to see that."

The workshop cultivates an accessible approach, providing an opportunity for seasoned devotees and neophytes alike to experience opera in an intimate setting. Nina Scott-Stoddart, program director, believes that the scaled-down quality of the workshop is more than a function of its relatively small size; it's also a particular way to engage with the art form. "I think there's something about it when you strip all of the big opera stereotypes away---big people in front of big sets, the orchestra---it's so much more immediate" she says. "You get right to the emotional heart of the piece."

Although popular conception often understands opera as an archaic medium, participants emphasize that it's important not to underestimate the energy and creativity that youth can bring, especially in a program where most of the performers are under 25.

For Haligonian Andrew Pickett, who plays Oberon in A Midsummer Night's Dream, opera is ultimately about art itself, and can be transformative. "We think of opera on a social level, that belongs to the elite and that's not what it actually is" he says. "Opera is the marriage of music and drama and that's what's really important---the magic that happens on stage. It's made me a believer."

Grab your opera glasses, Halifax, and prepare to be converted./p>