Expect the unexpected when pianist Sageev Oore improvises music for silent films, as part of JazzEast's OUT like a LION Festival. 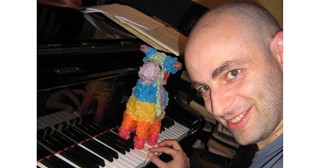 Sageev Oore has full grasp of experimentation and risk. On one hand, he's father to a 15-month-old boy, who's found his feet and legging it about the house. On the other, Oore is a pianist, an improviser who describes his frequent live scoring of silent films as a way of "seeing the connection between music in both directions," he says on a Sunday afternoon, when Oore junior's (supposed) to be taking a nap.

Oore the younger is down, but not out. But Dad ably divides his attention. And that, really, is his art, as audiences for two upcoming performances undoubtedly will discover. Silent Film & Piano #1 and #2 are part of the inaugural OUT like a LION Festival.

"I almost become invisible in that I'm taking in what I'm watching and responding to it on a visceral level," Oore explains.

He'll gear his matinee performance to families, improvisations for a series of "kid-friendly" shorts he's still selecting. For his evening performance Oore will accompany The Circus by Charlie Chaplin and at least one short, by Wadysaw Starewicz, in which the Polish filmmaker reanimates dead insects with stop-motion animation.

While living in Toronto from 1993 to 2003, Oore began his foray into improvising scores to films as they screened to live audiences. When starting out, he screened movies ahead of time, taking notes on "melodies, chord progressions, motifs." He recalls gathering a solid column of pages that, in the end, he ignored.

In all his years accompanying cinematic silence, Oore's discovered a "delicate balance" between consciousness and unconsciousness, perhaps a musical subconscious or a gut instinct. Asked if he ever plays himself into a tight spot or, worse, a dead end, he answers that he has. And, with that recognition, is the improvisation at risk of grinding to a halt? Does that sort of consciousness undermine the whole experiment? Oore laughs. "That's a really good question. As I'm approaching a point, and it feels like a corner, I just have to trust that it's not going to be."

Healy's used to catching him as part of ensembles, so she's looking forward to "seeing how he works in solo." She's amazed, she says, that "he's watching the film, [like] the audience."

For the first time JazzEast is experimenting with a first-of-spring festival, which features 16 concerts over five nights.

"It's definitely a big thing for us to do a festival instead of just a single concert," Healy says. JazzEast hosts monthly concerts already, but they're also presenters of the Atlantic Jazz Festival. "We're in the heart of logistics for the bigger festival," Healy acknowledges.

According to Oore, he hasn't neared the end of silent movies to score---beyond that, sources of inspiration for improvisation abound. This conversation could result in music, he explains: "I could go over to the piano and start telling the story. Sometimes there's a word, or tone of voice, the pauses, that let something happen." But the boy's asleep. Or is he? Hearing his son stirring, Oore's mind shifts. Following a toddler: now that would make some interesting music.