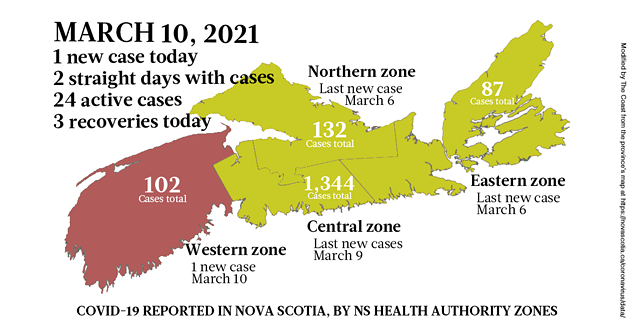 The humans beat the virus today, with Nova Scotia reporting three recoveries and a trifling one new COVID-19 case. That fresh infection is connected to "travel outside Atlantic Canada" in the reassuring phrasing of the provincial press release, and the patient "is self-isolating, as required."

"Again, our case count is remaining low—no cases Monday, five cases yesterday and now just one today. This highlights the fact that Nova Scotians are putting in the work to stay safe and healthy," says Iain Rankin, premier, cheerleader and good cop half of the pandemic-fighting team known as Strankin. "Thank you for continuing to look after each other and know that the best way to protect everyone is by continuing to follow public health measures."

To make sure Rankin's congratulatory tone doesn't give people any ideas, the release also quotes Strankin's bad cop, public health supremo Robert Strang. "Although our case numbers remain low, we can't become complacent. We need to keep following all public health measures to reduce the spread of COVID-19 as we work to vaccinate all Nova Scotians."

As you can read off the table below, the new case is in the Western health zone's Annapolis & Kings Community Health Network, which includes the towns of Wolfville, Middleton and Annapolis Royal. (We call it the Wolfville network for short.) The three recoveries are all in the Central zone—two in the Dartmouth network, one in Bedford.

According to today's report, Nova Scotia's laboratories processed 2,382 C19 tests yesterday, the lowest total since the Tuesday, February 23 report just over two weeks ago. Vaccinations, however, are up: 2,325 shots were given yesterday, a huge improvement over the 787 inoculations of the day before. And sadly hospitalizations are also up since the Tuesday report, going from one patient to two patients—which sounds a lot worse if you call it a 100 percent increase—with one of them in the ICU because their symptoms are apparently intense enough to require intensive care.

Where Nova Scotia's COVID-19 cases are on Wednesday

The totals for the health zones (Northern, Eastern, Western, Central) may be different than the totals you'd get by adding up the numbers in the Community Health Networks that make up each zone, because the province doesn't track all cases at the community network level. The zone totals reflect every case in the area; the community network numbers only show cases that can be localized to a region inside the bigger area. The names of the community networks here have been adapted/shortened for simplicity; click to download the province's PDF map with the exhaustively complete network names. All data comes from the Nova Scotia COVID-19 data page. We use a dash (-) instead of a zero (0) in the health network numbers to make the table easier to read.

COVID cases and news for Nova Scotia on Friday, Jul 30