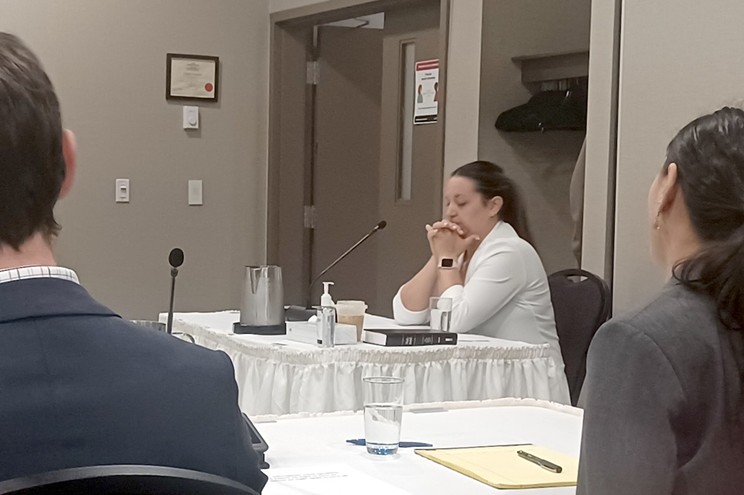 Lots of people were angry after a three-vehicle traffic incident on Quinpool Road, and several people disobeyed police orders, but only one person got tasered.

Friday was the last day of the Nova Scotia Police Review Board convened for Nicole Green, the Halifax Regional Police constable who tasered a man on Quinpool Road in December 2019. The three-day hearing was for both sides to present evidence about whether or not Green was justified in tasering a man The Coast is calling Fred (to prevent revictimization via Google search). Friday’s hearing was short, as all that was left was finishing Green’s testimony, which started on Thursday afternoon.

Although Fred’s skin colour (Black) compared to the skin colour of the cops (white) and other belligerents named in testimony (white) has been a throughline in The Coast’s reporting from day one and day two, Friday was the first day it was explicitly brought up at the hearing.

Taser cop Nicole Green was scared of being attacked with an alleged pen: Day two of the HRP constable’s review board hearing gets into the details of how a car accident on Quinpool Road became the scene of a violent arrest.

The HRM’s lawyer, Ted Murphy, asked Green if she was familiar with implicit bias and asked her if she knew to be mindful of it. Green’s lawyer immediately objected. “There’s only so much we can do about unconscious bias,” said Brian Bailey. “There’s only so far we can go down that road.” Prior to that exchange, Green testified she remembers Fred as being threatening, but admitted the video evidence shows a different version of events.

Changing tack from implicit bias, Murphy asked if Fred’s race played a role in Green’s decision making. “No,” she replied. If his race did play a role, would that be improper? “Absolutely,” answered Green. She also denied that Fred was treated differently due to his race.

The hearing’s previous two days established that Green and her rookie partner, constable Joshua Desmond, happened to be driving an HRP patrol car down Quinpool Road when Fred was turning right onto Quinpool from Monastery Lane. His truck made a wide turn, wide enough that two other vehicles, a Toyota Yaris and a construction pickup truck, either got hit or came close to being hit (it’s not clear which). Either way, the three vehicles stopped and people ended up in the street yelling at each other, making for a heated scene that Green and Desmond soon entered.

There was lots of anger to go around; evidence at the hearing showed that the three parties involved each ignored police instructions to some degree. Testimony also seemed to demonstrate all three parties were belligerent and had tempers flare at some point in the 45-minute precursor to Fred being tazed. Yet Fred is the only one who had been identified as threatening by constables Green and Desmond.

The hearing adjourned, but the review board’s work is not done. Lawyers will finish their written arguments on July 29, 2022, and a decision will follow some time after that.