Theatre’s dark and humourous folktale about xenophobia has a striking relevance to today’s headlines. 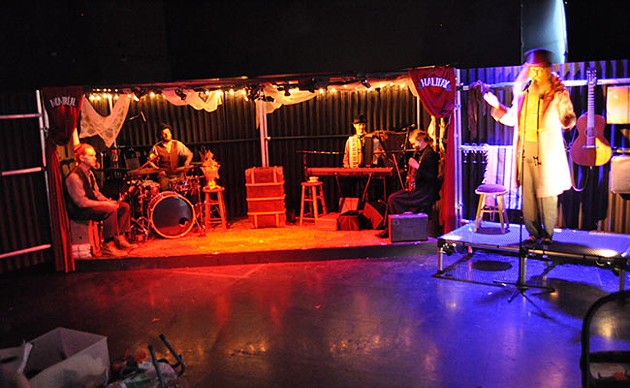 Carly Beamish
Expect the exuberance of a Ben Caplan show.

In 2015, Stephen Harper was much derided for using the term "old stock" during a federal leaders' debate to describe a group of Canadians.

"It was a moment that jolted me," says Christian Barry, co-artistic director of 2b Theatre and director of their upcoming play Old Stock: A Refugee Love Story.

Written by Hannah Moscovitch, the play stars musician Ben Caplan as an MC telling the true story of Moscovitch's great-grandparents, both Romanian Jews who immigrated to Canada in 1908. In addition to Caplan, a cast of actors and musicians will populate the stage to bring the tale to life.

For several years, Barry and Caplan wanted to create a show together and began the process by building songs.

"I'm a fan of his work," says Barry, "and I wanted to work with Ben, but the seed of the idea was in talking about what was going on in the world."

As the show was being developed, the Syrian civil war was gaining media attention, and both Barry and Moscovitch point to this as a pivotal event in reinforcing the kind of story that felt important to tell.

"The play shows xenophobia 100 years ago and though it's slightly less veiled today, boy, the headlines look familiar," says Barry.

"It's gained a dark relevance over the time that we've worked on it," says Moscovitch. With the Syrian conflict continuing to decimate a nation, and Trump trying to turn his racism into policy, the plight of refugees is far from a story of the past.

"I take my lead from a hero of mine, Primo Levi, who survived the Holocaust," says Moscovitch. "He talks about history as identity, and that you cannot know yourself without knowing your history. And genocide is an attempt to wipe out history. We know that from residential schools in Canada, and Jews know that from the Holocaust. In telling this story of Canada, we are speaking about identity, which feels very relevant."

In doing research on her great-grandparents, Moscovitch discovered that they had landed in Halifax when they came to Canada. "My great-grandparents met at Pier 21 for the first time. I'd gone there to see if they had any information and they told me they were here. It made me cry. I had no idea."

Despite its serious subject matter, audiences can still expect the joy and exuberance that is typical of a Ben Caplan show.

"There is joy," says Moscovitch. "It's very true of my work that I thematically choose dark subjects and then I address them tonally with a lot of humour and sexuality and joy. And that's very Jewish of me to do that."

After a long pause, Moscovitch adds: "It's about loving for a second time. It's about looking into the eyes of god. It's about the experience of your home becoming an apocalypse. And I think there are a lot of fucking good songs by Ben Caplan."