“More context would have been helpful,” admits spokesperson about previous statements made to The Coast. 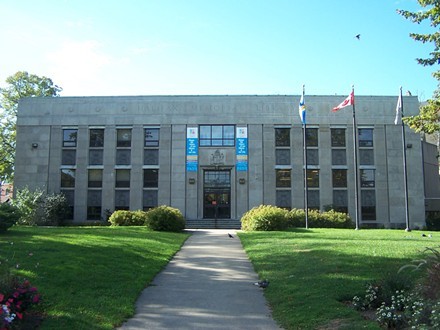 The old public library won't be sold for private redevelopment, but will likely be leased for “private use,” so long as that use has will “support, develop and increase the number of start-ups in Nova Scotia.”

Two weeks back, The Coast published an article looking at the future of the old Spring Garden Road Memorial Library. Hours after publication, the province demanded an immediate correction.

The story came about because one downtown HRM council candidate has been pitching the idea of selling the public property to commercial interests. I interviewed Dominick Desjardins about that idea, and then contacted the province to see if Nova Scotia was at all considering selling the land for private development.

Surprisingly, the answer I received from spokesperson Brian Taylor was that Nova Scotia was “considering many possible option, including private use.” I interpreted that emailed statement to mean private development was at least a possibility. I wasn’t alone in that assessment. Councillor Waye Mason drew the same conclusion when I presented him with my emailed questions and Taylor’s response.

But Department of Business spokesperson Toby Koffman phoned me after publication to say I got it all wrong. He requested a copy of Taylor’s original emails, which The Coast provided, and in a subsequent emailed statement stressed that the province still doesn’t own the SGR library property, and that it did in no way suggest the site could be sold to developers.

The province, he claims, is still in active discussions to lease the old library to Volta Labs, which would constitute “private” not-for-profit use. He provided The Coast with a press statement to that effect, which has apparently has been used for media requests about the library since at least March. It hadn’t been given to The Coast by Taylor.

Koffman wanted an immediate correction to the article—in print, online and on social media. I published his statements in an update, but I had some follow-up questions before I was comfortable with issuing a correction and tried to schedule a phone or in-person interview with Koffman to clear things up. He refused.

“Sorry,” Koffman wrote in another email, but “I’ve provided all the information I can.”

Instead, I sent him 22 follow-up questions about his statement, the government’s plan for the site and why—regardless of private or public use—the building is still sitting empty two years after council voted to return it to the province. Last Friday, around 4:50 in the afternoon, Koffman emailed his answers. We’ve printed my questions and his responses below in their entirety.

The Coast: I asked if selling the land to private developers was a possibility, and Brian [Taylor] replied directly to that question by saying private use (amongst many other options) was being considered. It seems you’re saying now there’s a distinction between “private use” and selling the property for private development, correct?
Koffman: The Province does not currently own the building. If and when we do, we’re not considering selling the property to a private developer. The potential uses that have been discussed—Volta, got [SIC] example—could be considered private use; however, it would have a broader public benefit, in line with provincial economic development priorities—to support, develop and increase the number of start-ups in Nova Scotia.

If that was what Brian originally meant, why did he reply to my question with an unrelated answer?
His answer was correct—more context would have been helpful.

If the province isn’t looking at selling the land for private redevelopment, or puts a priority on keeping the land publicly-owned, why wasn’t that communicated to me originally when I asked about it?
Your question was, “Would it [the province] be possibly looking at selling the land to private buyers for redevelopment? Our answer was, “The province is considering many possible options, including private use.” While that is an accurate response, we should have provided you with our full statement on the matter.

Why did you ask me for a copy of Brian’s email? Was he authorized to make the statements he did?
Brian was authorized and his statement was accurate. I asked to see his email to you because Brian was on vacation, and I don’t have access to his emails.

Why didn’t he provide the statement you provided (mentioning Volta) when I first asked about possible future uses for the site if that was already prepared and had been used for the last several months?
We agree that we should have provided you with our full statement on the matter. Your questions were about responsibility for the property, maintenance costs and intentions to sell the property. We did not anticipate you would draw conclusions from the information we provided about the state of our discussions with Volta.

You’re saying an offer has been made by HRM, but the province hasn’t said yes or no, one way or another, correct? HRM has said the title transfer was still in process, so I’m left wondering if there’s anyone or anything holding up the sale’s completion besides the province. Can you give me a better idea of why this transfer is taking two years?
We’re saying that government has the right to reacquire the Halifax Memorial Library from Halifax, and Regional Council has approved a motion to return the property to the province. No decisions have been made about the site. We are in discussions with Volta about leasing the library to them. We are taking the time that’s needed to do this properly.

To confirm: HRM went forward with a vote on returning the property to Nova Scotia based on a request from the province about plans with Volta Labs?
Government has the right to reacquire the Halifax Memorial Library from Halifax, and Regional Council has approved a motion to return the property to the province. This relates to the original agreement with the municipality that allowed the city to use the property as the old Memorial Library. Since the city was no longer using it as a library and the Province was considering potential uses, we initiated the process to reacquire.

[Councillor Waye] Mason says the government was “on a tear” to announce something in a couple of months, prompting council to quickly approve the “extraordinary sale” in 2014. Was the original timeline to announce a deal in early 2015? Did that get delayed? Why?
Since the city was no longer using it as a library and the Province was considering potential uses, we initiated the process to reacquire. There is no deadline. This is an important piece of property with a deep history. Reacquiring it and developing it for a new use involves many partners. We’re taking the time needed to do this right.

Since the building is not currently a library or a park, under the original terms of the agreement, shouldn’t the land be controlled by the province right now anyway?
Government has the right to reacquire the Halifax Memorial Library from Halifax, and Regional Council has approved a motion to return the property to the province. That process is not yet complete.

Why is it taking so long for the transfer to be complete? Is it stalled on any particular point?
This is an important piece of property with a deep history. Reacquiring it and developing it for a new use involves many partners. We’re taking the time needed to do this right. There is no deadline.

Is the province reimbursing the municipality for the roughly $250,000 (estimating somewhere below $140,000 a year) in maintenance and upkeep costs that HRM has had to pay since its council voted to give the property back to NS?
The current costs remain with HRM and there is no plan at this time of reimbursing any costs incurred while the city still has title. You should verify your numbers with HRM. Our understanding is those costs are significantly less than $140,000 per year. [$140,000 per year was a cost previously reported by the Herald. When asked in early July, HRM spokesperson Brendan Elliott only said that current costs would be “less than” $140,000 now.]

Negotiations with leasing the space to Volta are still ongoing? How long have those negotiations been taking place to use the old library site? Why are they taking so long? What concerns have Volta expressed about the property?
We have had preliminary discussions with Volta for a year or so. This project involves several partners, and we’re taking the time that’s needed to do this properly. We know that the property requires significant renovations, and we’re working on a plan that takes that into consideration.

Did the move from Volta to the Maritime Centre have anything to do with the conditions of the site?
Volta’s decision to move was made because their former location was being demolished.

Will the property need to be renovated before anyone moves in? Will the province be paying that cost? It’s been reported as needing $13 million in repairs. Is that accurate?
The property requires significant renovations, and we are working on a plan that takes that into consideration. No decision has been made about who will pay for those renovations. However, we are not looking to HRM to pay for the renovations.

Would Volta be leasing the whole site, or would other tenants be using the renovated space?
We are in discussions with Volta about leasing the library to them. No decisions have been made about the site.

Is that the province’s preferred plan for the site?
We would like the property to be used to achieve public goals of economic and private sector growth. We have stated before that we would like the site to be used to encourage business growth, foster innovation and create job opportunities that will help keep young people in Nova Scotia.

If so, why wasn’t that communicated when I originally asked about it?
This has consistently been part of our statement on this matter. We should have provided it to you.

Brian said plans are still in preliminary stages, even after what appears to be nearly two years of planning, is that correct?
This project involves several partners, and we need to take the time to do it right. There is no deadline. We know that the property requires significant renovations, and we are working on a plan that takes that into consideration.

The councillor for the area said that Nova Scotia has till the end of summer—about two months—to finalize those plans or he’s going to try and cancel the sale. Are you confident you’ll have plans finalized before then?
We will continue to work with the municipality to ensure this critical piece of real estate is used to its potential—to encourage business growth, foster innovation and create job opportunities that will help keep young people in Nova Scotia.

Will the province attempt to stop that sale from being cancelled if council does take that action?
We are not going to comment on hypothetical scenarios.