Where to watch the big game, and where to join in to play one of your own. 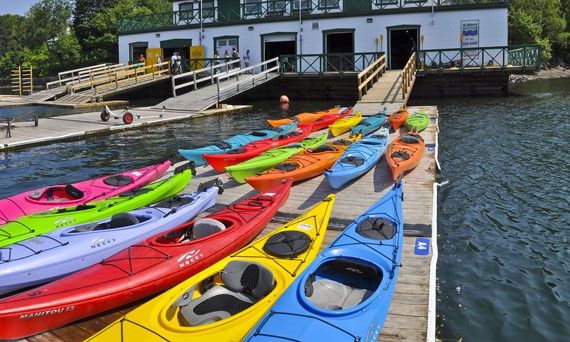 via HRM
Get out on the water via watercraft rentals at the St. Mary’s Boat Club.

Lions Arena Gym (Spryfield): Roller derby
If you’re 19 or older, identify as female and want to experience the thrill of the contact sport roller derby, then the Anchor City Rollers are worth checking out. The non-profit organization runs a league with anywhere from two to four teams—including travel teams that hit the road to compete. If you’re looking to play, the league runs an extensive “fresh meat” program where newbies can learn the sport during two-hour weekly practices, to get ready for league play from May through September.

Halifax Common: Baseball, roller skates, snowshoes, skating
In the summer, the Halifax Common turns into a softball utopia. Other than baseball diamonds, there’s plenty of space to kick a soccer ball around, play cricket or toss a frisbee. The Oval is a prime destination in both summer and winter. Skates, snowshoes and sledges are available for free in the winter. In the summer, grab roller skates for a spin around the concrete surface. Just remember a piece of ID as collateral while renting equipment.

Gorsebrook Park: Ball hockey, bike polo
There’s an outdoor arena nestled at the bottom of the hill behind Gorsebrook Junior High School in the south end. It’s an arena featuring boards, painted hockey lines on pavement and a fenced-in playing surface, which is helpful when your slap shot has a little bit too much juice. On Thursday evenings, it’s also the meeting spot for people playing hardcourt bike polo.

Oxford School: Basketball
If you want to practice your alley-oop, the basketball court behind Oxford School in the west end is a prime location to get your hoops fix. There’s a pickup basketball group on Facebook, or you can pop by and join a game. Earlier this summer, the court hosted a Full Court 21 one-versus-five tournament, with the winner going to the world final in New York City.

GABRIELLE GALLANT
Join in the crowds in booing Ronaldo at Niche.

Scotiabank Centre: Hockey, basketball, everything
Located in the shadows of Citadel Hill, the Scotiabank Centre is the focal point of major sporting events in Halifax. It’s home of the Halifax Mooseheads in the Quebec Major Junior Hockey League, and the Halifax Hurricanes, who return for a second season fresh off its first National Basketball League championship in June. Pro basketball has been rocky in Halifax, but a league title and quality team make the Hurricanes a must-see if you believe ball is life. Finally, the Nova Scotia Sports Hall of Fame is in the building. Free to enter, the museum is full of artifacts from a smorgasbord of sports history—including an entire collection dedicated to the unofficial mayor of Cole Harbour, Sidney Crosby.

Oasis: UFC, boxing, karaoke
Oasis perfectly occupies the middle circle of a sports and karaoke Venn diagram. There’s a chance that while watching the big game at the Spring Garden Road sports bar, the soundtrack for the night will be a rendition of “(I Can’t Get No) Satisfaction.” If you’re a fan of the Leafs, that may be appropriate anyway. If you’re looking for a spot to watch major pay-per-view events, including UFC and boxing matches, Oasis is the place to be.

Niche: Soccer
Most sports bars in Halifax resemble the stereotypical basement full of jerseys, autographs and other memorabilia proudly displayed. Niche looks more chic, but during major tournaments such as the Euro and World Cup, the restaurant is the place to be for some football. A giant screen in a beer garden at the entrance to the Maritime Centre on Barrington Street is decorated with the flags of participating countries. It’s one of the only ways in town to get fresh air and watch sports on TV at the same time.

George Dixon Recreation Centre: Goalball
The Paralympic sport goalball is designed for visually impaired athletes. It’s a three-versus-three game played on a court where players throw a ball with embedded bells into the opposition’s net. Everybody wears eyeshades of some form to completely prevent vision, relying on the sound of the ball as a guide. Organized by Blind Sports Nova Scotia, the goallball season takes place from September until April. It’s an entertaining sport to watch and a great volunteer opportunity.

Halifax Common: Cricket
The three-team Halifax Cricket League plays on the Halifax Common near Cogswell and Robie Streets, where a permanent pitch surface is built into the ground. The league’s been around since 2010, although the roots of the sport in Halifax date back to the 1960s when games were played on the Garrison Grounds. The season runs from May until early October with games on Saturday and Sunday afternoons. The league plays two formats: The short Twenty20 and one-day Forty-over format—which is great for spectators who don’t want to spend five days watching cricket in the heat.