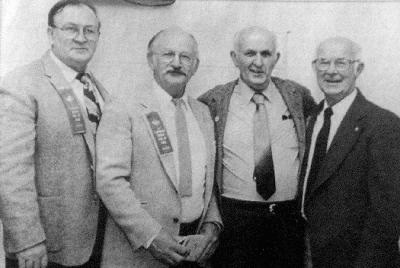 Tom McCluskey is second from the left.

Tom McCluskey, one of Canada’s most respected boxing coaches for decades, died on Tuesday in hospital in Dartmouth.

To boxing fans, McCluskey was an iconic presence, working the corner during major fights, in demand not only as a strategist but as a cut man. McCluskey helped transform kick-fighter Ralph Hollett into Canada's top middleweight, and he was involved for two tumultuous years with Berbick, who, after moving to Florida, asked McCluskey to come help prepare him for a fight.

McCluskey was a consummate storyteller, and his time in Florida provided with him with rich material. McCluskey did not have a driver’s license but Berbick, at one point, demanded that McCluskey drive his car on the freeway. At five-foot-seven, McCluskey said he was in no position to argue with the six-foot-three heavyweight, who later won the WBC title.

McCluskey was known for his quick wit and colourful comments.

He formed a close bond with many of his boxers. He was heartbroken by the early death of Howard whom he took to South Africa to fight for the Commonwealth title. When McCluskey died after a brief illness, former boxer, Gerry Meekison was at his side along with Tom’s wife, children, and brother, Ace.

Tom, Ace, and their brothers, Cobey and Wilfred were inducted into the P.E.I. Sports Hall of Fame for their contribution to the sport of boxing.

In 1982, the Canadian Boxing Federation recognized McCluskey’s achievements with its Trainer of the Year Award.

For many years, McCluskey worked with the Nova Scotia Voyageurs of the American Hockey League, an experience he enjoyed.

McCluskey was born in Charlottetown. He entered the sport as a boxer but his career was cut short by a serious injury during the Second World War.

Editor's note: This obituary was written by Tom McCluskey's son, Michael McCluskey, aka Fat Apollo, who by chance will be on the front cover of tomorrow's Coast. Read more about Tom McCluskey's remarkable career here.