The 18-year-old R&B legacy makes the music only she can. 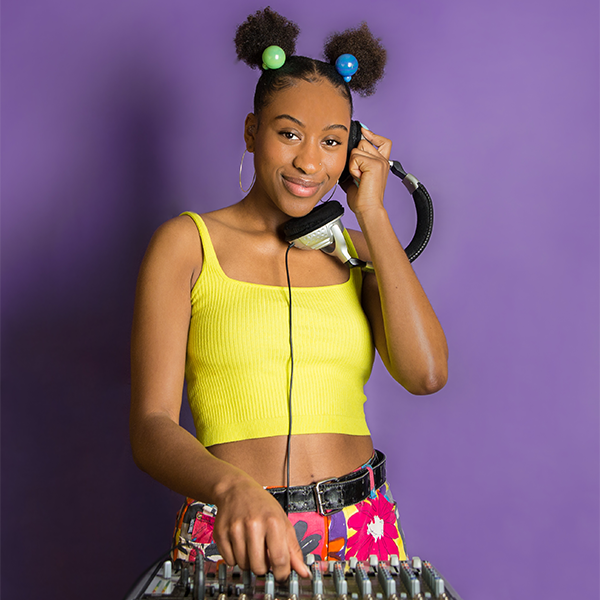 It's pouring rain outside, but Zamani Bernard-Millar's home studio in Clayton Park is filled with the warmth of family and music. The up-and-coming 18-year-old R&B producer, songwriter and singer—who performs under a mononym, her first name—is about to play a song from her forthcoming EP. Her mother, Delvina Bernard, stands a few paces away and snaps photos of her daughter with incessant pride; her dad, Harvey Millar, carefully hooks up the stereo. It might feel like a scene from any other family home if it weren't for all of the recording gear surrounding us.

Zamani presents herself like a lot of other teenagers—small hoop earrings, crisp white sneakers—but it's clear she's onto something bigger than your average bedroom producer. She speaks in articulate, considered sentences; she sits with notably good posture and begins the interview by referencing a set of notes she's prepared. And her songs—smooth, melodious R&B—are the real deal. On my way into the studio, there's a suitcase in the family's foyer leftover from a recent trip to perform in Rotterdam. It has a sticker of Zamani's face on it.

While a growing profile has taken some getting used to, Zamani says that music has always been a part of her family life. Bernard, an educator who now acts as a sort of manager for her daughter, performed in the acclaimed vocal group Four the Moment; Millar plays jazz guitar. In the middle of our conversation, Bernard points out a photo propped up behind the leather couch: It depicts the influential, late American jazz singer Betty Carter mid-performance.

Millar chimes in to share that Carter was a favourite in the family home; he remembers playing her duets record with Ray Charles for Zamani and her sister as they fell asleep. Zamani says she appreciates the influence of her musical education, and mentions influences ranging from old soul music to contemporary hip-hop production. "It's foundational," she says, describing the histories of Black music that she draws on to build each song.

Zamani never saw herself as a performer—"I'm really, really shy," she confesses. She's a humble perfectionist who writes, produces and performs all of her songs herself; when I ask her how she got over her initial trepidation around performing, she laughs. "I like to be the one that sings on my tracks," she says. In other words, Zamani knows how she wants her stuff to sound, and she knows that she's the one to make it happen.

Still, her work remains egoless—and it's catching the attention of listeners around the city, and across the world. She was recently in Rotterdam to play the New Skool Rules Festival, where she played alongside inspirations like fellow local Shevy Price and the audacious Toronto rapper Haviah Mighty. Her calendar is filling up for the summer, too: In addition to her Friday afternoon set at OBEY, she'll be playing a few more local gigs, participating in the Gordie Sampson Songcamp and travelling to St. Lucia in August for an appearance at the Roots & Soul Festival.

She plans on spending the rest of her free time working on music to bring with her in her travels: She wants to make the most of any opportunity that allows her to share her work with new listeners. "I think the goal, for me, in music, is to be able to impact other people," she says. "Because I don't want fame or that kind of stuff...I really want to impact other people with my music the way that it helps me."

Zamani remains remarkably grounded. She talks about music as both a passion and a job, something that keeps her fuelled creatively but shouldn't become all-consuming. Music can't be her only creative avenue, she says: She wants to keep room for other forms of expression in her life, from visual art to film. In a few weeks, she'll graduate from high school; next year, she has plans to study architecture. When you think about it, designing buildings takes a certain creativity: You're creating things that people will use, but also hopefully making something that they will appreciate and enjoy, too.

After all, she says, "people will always need somewhere to live." Later, listening to her song "The Outside" on the studio speakers, it's clear how the same is true for music. "I know I'm not alone when I say I'm on the outside," she sings on the hook, repeating the final word like a mantra. There will always be a need for music that surprises our ears and validates our individual place in the world. And so long as that need exists, there will be people like Zamani: A craftsperson who humbly makes beautiful music, because she can't imagine a life without it.