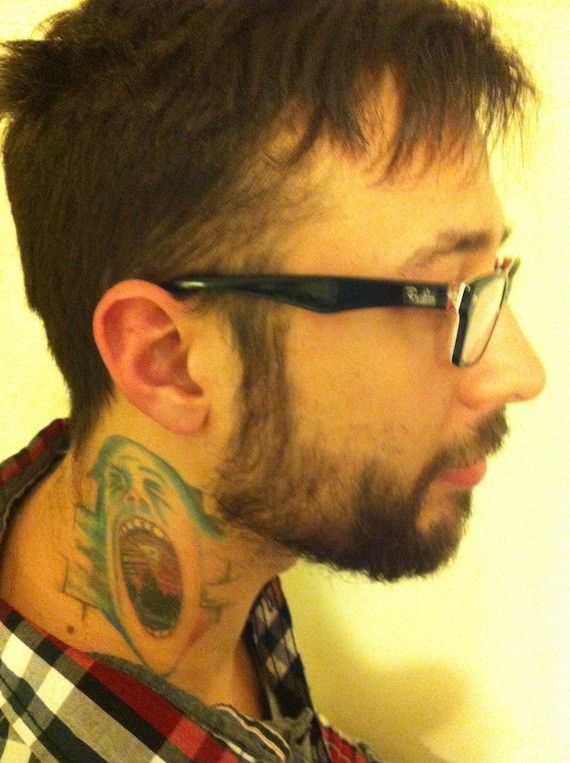 Nursing student Jeremy Wheeler was told to cover up his neck tattoo before taking a clinical placement at a nursing home.

He had only ever worn makeup for Halloween. This changed when Dalhousie nursing student Jeremy Wheeler was asked by his instructor to cover his neck and wrist tattoos for a five-week clinical placement at a nursing home.

“I have a screaming face on my neck. I can understand covering it up in the context of a dementia unit,” says Wheeler. Wheeler has an image from Pink Floyd’s The Wall on his neck, Batman and Deadpool symbols on his wrists, the symbol for the band Mudvayne on his right shin and the Star Wars Rebel Alliance and Empire logos on his hips. But he doesn’t worry that his tattoos will hurt him in the job market. “They’re pretty much crying for male nurses,” he says.

Dalhousie’s dress and uniform policy, drafted in conjunction with the IWK and Capital District Health, states, “tattoos that depict violence, pornography, gang or racial messages must be covered.” Wheeler doesn’t believe his tattoos are inappropriate. If anything, he says, they’re “a great conversation starter.”

Wheeler’s situation highlights the difference between the perceptions of body art held by young adults entering the health-care industry and the older people they are caring for. The College of Registered Nurses of Nova Scotia’s position statement on professionalism cites an Ipsos survey which found the public ranks nursing as one of the most trustworthy professions. “Opinion polls reinforce the belief that nurses are generally prized for their virtues, not their knowledge.”

Wheeler says he understands that many people, particularly those in nursing homes, do not equate tattoos with virtue. “Without sounding ageist, most people from their time with tattoos would be sailors and scoundrels,” he says. And so, to be professional, and to respect his instructor’s wishes, Wheeler covered up his psychedelic rock, DC and Marvel tattoos. “I didn’t want to make a fuss. It was just five weeks.”

He used Kat Von D tattoo concealer from Sephora, priced at $60 to cover his body art. “I didn’t have the patience to match up my skin tone. It just looked like a weird blotch on the side of my neck.” He kept his wrists covered by wearing a long-sleeved black t-shirt under his scrubs. “It was very hot.”

Shauna Houk, assistant director of undergraduate studies for Dalhousie’s school of nursing says, “From our perspective we don’t care if a student is covered in tattoos from top to bottom.”

The university, she says, celebrates diversity and individuality.

However, for student placements, Houk says, “we’ve aligned with our stakeholders in terms of the dress policies that they want in their agencies.”

She says if a tattoo is offensive to a patient or family it would be challenging for a nurse to develop a therapeutic relationship. Yet, she once worked with a nurse who had tattoos all over his neck and arms, and in 27 years in nursing she says tattoos have been “a non-issue.”

Dal has no specialized policy for work placement attire in other sensitive fields such as childcare or mental health, where a tattoo could be frightening. That’s left to the discretion of the clinical instructor and the health agencies where students are placed.

According to another Ipsos poll from 2012, two in 10 Canadians have at least one tattoo on their body. Still, Matt Owen of Utility Tattoo on Quinpool Road says tattoo stigma will continue to exist until the younger generation are the “grownups.” But, he says, “[The stigma] has definitely changed. People don’t freak out when they see hand tattoos or neck tattoos. Face tattoos, yes, you might be pushing your luck.”

He says that because stigma does exist,  “you’ve got to be sure you’re going to be able to get a job for the rest of your life. I don’t want to be that person who facilitates your bad decision just so I can make a hundred bucks.”

Jeremy Wheeler says he wants to find a job where his tattoos are accepted. “I would find a place that would not require me to cover them up.”

Beth Brown is a journalism student at the University of King’s College.
More