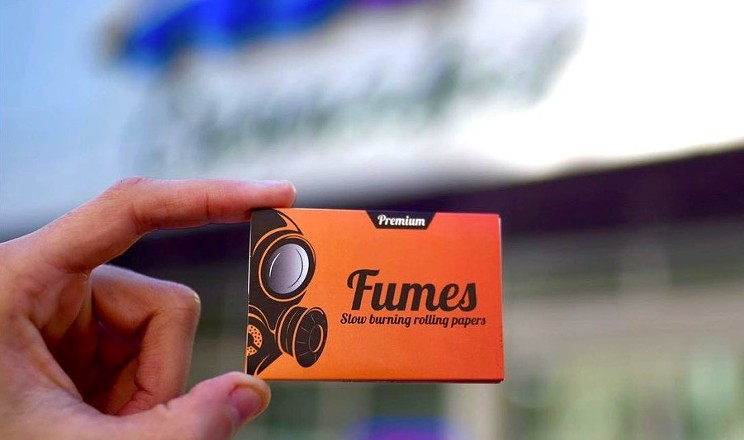 via Instagram
The cannabis industry in Canada is overwhelmingly white, but Fumes co-owner Josh Creighton says that “just makes us motivated to trailblaze through those spaces.”

Until now, Nova Scotia‘s liquor-and-cannabis corporation has never stocked products made by a local Black-owned company.

A year ago, Fumes Rolling Papers were selling in about 30 convenience stores around Halifax. Not bad for a local start-up, but co-owners Josh Creighton and his brothers Treno and Tyler Morton had even bigger ambitions. Their sights were set on the Nova Scotia Liquor Corporation and its $86-million legal-cannabis business.

“We very much saw NSLC as our breakaway to newer and broader markets,” Creighton says. “We knew once we secured them as a client, it would be very prosperous for us.”

This week, the brothers saw that goal become a reality. As of Monday, February 28, each of the 38 government-owned weed stores in Nova Scotia stocks Fumes high-quality hemp papers, selling for $2.75 plus tax per pack of 40.

The partnership is a milestone for both companies. Carrying Fumes instantly doubles the store’s variety, since until now the only papers sold there are Canadian Lumber, another local brand. NSLC Cannabis doesn’t stock big brands like RAW or Zigzags; NSLC spokesperson Jody Thomas says there’s no official policy on supporting local, but “local products account for 25 percent of our active cannabis listing base.”

Fumes says in an Instagram post that this is also the first local Black-owned product to hit NSLC shelves, “making this a historic moment for our community here in Nova Scotia and a small step towards achieving a more diverse business sector.”

When the trio of brothers started their company in June 2020, they didn’t have much business experience, and the legal cannabis industry was in its infancy. “We knew nothing more than the everyday consumer,” Creighton says.

Fumes tried to get a distributor to help make deals with stores, but those early days involved a lot of rejection. “We applied to about two or three distributors in our first year, but none of them accepted us,” Creighton says. “We thought that was the blueprint, and so we followed that—and when they rejected us we were kind of like, well shit, what do we do now?”

The brothers weren’t ready to take no for an answer. “The plan doesn’t change, it’s just how you achieve it,” says Creighton. Without a professional distributor introducing Fumes to retailers, the entrepreneurs had to figure out how to do all the leg work themselves. “We’d make an asset map of all the corner stores in HRM and even broader in Nova Scotia,” Creighton explains. “And we drove to them and we made our pitch in person. It was really that simple.”

These efforts got Fumes papers into stores across the province, as well as some in New York and Toronto. But the corner store market, which is believed to be mainly serving consumers who buy cannabis illegally, could only take Fumes so far. The real goal was the legal stores. “They’re very much why we went into business,” says Creighton.

When the brothers felt ready to pitch to the NSLC last fall, setting up that first meeting “was pretty much as simple as an email,” says Creighton. And he says the NSLC was receptive: “The soil was very fertile for a new startup.” Over the next six months, Fumes scaled up production and created business documentation like a value proposition and recall plan that the big corporation requires of its suppliers.

The brothers had multiple meetings with NSLC executives (virtual, thanks to COVID), and were often the only people of colour on the call. “We’ve lived most of our lives like that, so we’re pretty used to it,” Creighton says. According to a 2020 study, 84 percent of the cannabis industry in Canada is white, but Creighton says that “just makes us motivated to trailblaze through those spaces.”

Creighton says the Fumes co-founders are proud of how far they’ve come, “but there’s so much more to do. We want to keep our vision ever-evolving.” In the coming months, Fumes has plans to unveil more products (think new sizes) at the NSLC, and is working on expanding to wider markets.

“We want to capture the whole east coast and then move outward from there,” says Creighton. “Cannabis PEI just reached out to us, so we have capacity to serve those four locations. Then the next step will be New Brunswick.”

And “hopefully by next year we can be Canada-wide.”