“Cryptic messaging” by the Liberals has Nova Scotia’s film industry in an uproar. 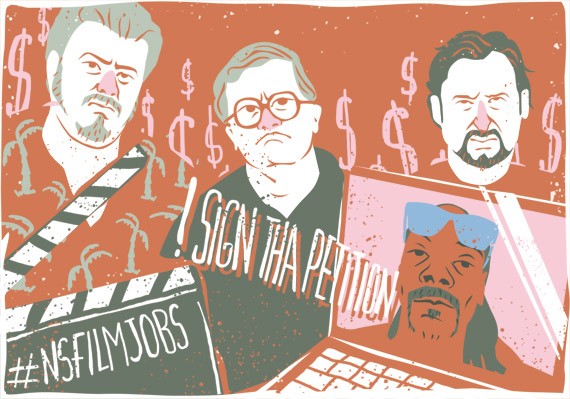 "The Liberal government must already regret its cryptic messaging," says filmmaker Thom Fitzgerald, referring to a potential cut to the Nova Scotia Film Industry Tax Credit that has many people in a huff. "A petition in protest of it got 10,000 signatures in one day. They've instantly turned Trailer Park Boys fans against them. No politician could want that."

The petition, quickly nearing its goal of 25,000 signatures, has supporters as far out in cyberspace as Snoop Dogg, who tweeted for his followers to "Sign tha petition!" There are press releases, hashtags and a Facebook profile picture campaign where film industry workers declare: "I pay taxes. #NSFilmJobs."

To make a short story even shorter, Nova Scotia has a tax rebate that allows film productions to save a whole lot of money if they film here or hire its residents. Last week, finance minister Diana Whalen, who has previously spoken very favourably of the program, said some unclear things, indicating the new budget may include a cut to the tax credit.

"It costs taxpayers 24 million dollars a year," Whalen announced. "With [the credit], Nova Scotian taxpayers pay up to 65 percent of the eligible salaries for film and television projects. Now by contrast, our payroll rebate programs for other industries are capped at eight to 10 percent of eligible salaries." These statements are vague enough to give no indication as to what lies ahead, yet clear enough to show that Whalen now wants the film tax credit to be seen as a burden.

In 2013, premier Stephen McNeil was elected on a platform that included keeping the tax credit in place for another five years. "Early on in my career I did Stephen McNeil's make-up for some events and press campaigns," says Mallory Glenn, a make-up artist on shows like Haven and Seed. "At the time he spoke in one of his campaigns about incentives to have students study in Nova Scotia and remain in the province after graduation. He was one of the people who asked if I planned on staying in Nova Scotia or planned to go to a bigger city with more work. I told him, as I told everyone, I have plenty of work here, my family is here, I love it here."

With the tax credit in place, the local industry employs over 2,000 people. A decrease or elimination could mean unemployment or relocation for many Nova Scotians. "I have absolutely found work as a direct benefit from the tax credit," says Glenn. "That could all change now though and that's really scary."

In the past few days, it's been made crystal clear, if it wasn't already, that the film industry is good for the local economy in ways that far outweigh any cost to taxpayers. This week's budget announcement will show if the government's support for filmmaking in Nova Scotia is as fleeting as people are being led to believe.