Communications Nova Scotia
Nova Scotia has issued a vaccine mandate for those working in public schools and across health care centres.

A new proof of vaccination mandate comes with modifications for Phase 5 reopening on Monday.

Vaccines will be mandatory for health care, long-term care, public school and child care staff in Nova Scotia beginning November 30, the province announced Wednesday, along with modifications to Phase 5 of reopening, which is due to start Monday.

The province's new vaccine mandate will require that all workers be fully vaccinated within the Nova Scotia Health Authority, IWK and continuing care homes. It will apply to all public school teachers and school-based staff, physicians, paramedics and service workers. Left off this mandatory-vax list are day care staff and firefighters.

Staff at the listed workplaces who are unvaccinated by November 30 will be placed on unpaid administrative leave. “Termination could be the final outcome,” top doc Robert Strang said during the Sept. 29 COVID briefing. In a press release Monday, Oct. 4, the province added regulated child care workers and correctional services staff to the list of people who must be vaccinated.

Communications NS
The province has announced a new mandatory vaccine mandate for a number of professions.

At the briefing, health minister Michelle Thompson said this mandate is something health care workers and educators have asked for in order to stay safe.

Premier Tim Houston was asked if he's concerned the mandate will impact staffing at health care centres, which are already struggling to cover shifts. He says he understands there's a risk that the province may lose some health care workers to this mandate, "but this is the decision that has to be taken."

Doctor Strang laid out the province’s plan to continue with mandatory masking indoors, including in schools, and keeping informal gathering limits at 25 people indoors.

So what really changes?

While masks inside and gathering limits on informal gatherings will remain, Strang said Phase 5 still represents a substantial step forward in reopening. Beginning Monday, Oct 4, there will be no capacity caps or physical distancing requirements in hubs of non-essential and social activities—but only fully vaccinated patrons are allowed in the door.

“This opens up a large number of venues… bars, restaurants, sporting events, arts and culture events, all sorts of recreation activities for all ages back up to full capacity,” Strang said during Wednesday’s tech briefing. Physical distancing will no longer be enforced once the proof of vaccination policy is in effect.

“That is a significant step.”

Both Houston and Strang reminded Nova Scotians unhappy with the new POV policy not to take out their frustration at the service staff enforcing the mandate.

“Do not take this out on the hostess at the restaurant or the manager on your kid’s hockey team. Please be kind,” Strang said, “even if you disagree with what we’re putting in place.”

Staff at restaurants and events centres will have access to voluntary training on de-escalation techniques, and Houston said more support may be made available if needed.

Beginning Monday, Oct 15, immunocompromised Nova Scotians and those who require an extra dose for essential travel can get a third dose of COVID vaccine. The province will also be offering a booster dose, to happen at least six months after the primary series of doses, for long-term care residents and staff. It will also be available to anyone living at or working in a congregate setting.

The difference between a booster and a third shot is when the jab is administered, Strang explained. A third shot can be administered shortly after the second shot, whereas a booster comes at least half a year later.

Strang said at this stage he doesn’t know if any more people will be added to the list to receive a third or booster dose.

“For now we don’t know, we’ll follow NACI recommendations”—that’s Canada’s National Advisory Committee on Immunization—“and they’re actively looking at who’s next,” he said. Strang said it’s worth noting that there’s disagreement in the scientific community about offering widespread third doses, as the United States has done.

“We have to be cognizant that this is a global pandemic, we’re never going to be safe until we have much better vaccine coverage around the world. So should we be using third doses or booster doses beyond what we’re doing versus contributing that to a global effort?” he said during the tech briefing.

Medical exemptions to the vaccine mandate and proof of vaccine policy will be available through a primary care provider to those who fall under six specific contraindications to the COVID vaccine. The province estimates this will apply to a very small number of people, likely fewer than 2,000 in the entire province. 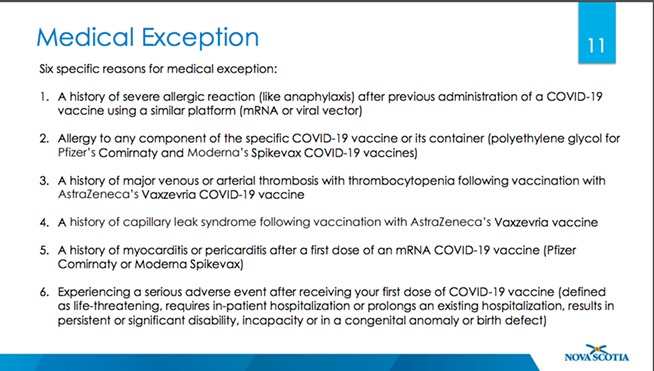 Nova Scotia is reporting 41 new cases of COVID Wednesday, September 29, bringing the active tally to 224 province-wide. The bulk of the new cases, 32 of the 41, are in the Central zone, where Strang says there is community spread among unvaccinated 20-to-40-year-olds.

There are four new cases in the Northern zone, three in the Eastern zone, and two new cases in the Western zone. As of Tuesday, the province is now reporting school exposure notices, and lists more than 40 schools with potential exposures between September 22 and 28.

Update: This story has been updated to reflect the province's Monday, Oct 4 addition of  regulated child care workers and correctional services staff to the vaccine mandate.