Meetings this week call attention to efforts to stop the practice 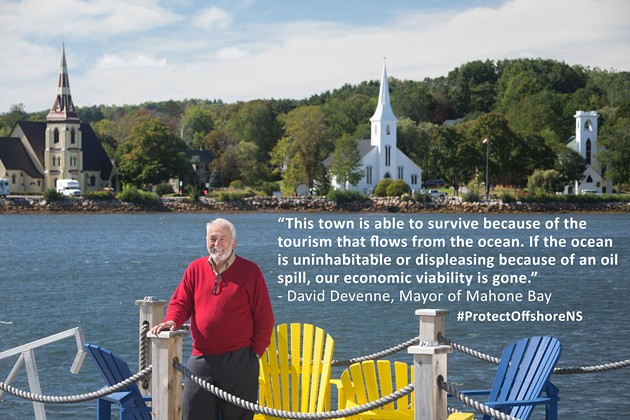 Robert Van Waarden via The Council of Canadians
“You can't eat oil. And you can't eat money,” says David Devene, “You can eat fish; you can eat lobster.”

Tonight, Offshore Alliance is meeting in Mahone Bay to speak about international efforts from municipalities to stop offshore drilling. This comes on the heels of a Tuesday press conference held just prior to the start of the Fall Conference of the Federation of Nova Scotia Municipalities, where twelve Nova Scotia municipalities—Halifax not included—announced their request for a public inquiry on the risks and impact of offshore drilling for oil and gas.

“The economy of our town, once driven by wooden shipbuilding, is now driven by the tourism industry, and the ocean is a critical part of the industry,” says David Devenne, mayor of Mahone Bay. “Any risk for that mainstay of our economy is an unacceptable possibility and offshore drilling is just such a risk.”

“I'm a fisherman's daughter. I'm a fisherman's wife,” says Linda Gregory, deputy warden of Digby County, who was also present at the announcement. “My district is mainly fishermen, as a whole. Nova Scotia fisheries exports $2 billion per year. According to the government of Nova Scotia, this provides 26,000 jobs direct and 26,000 jobs indirect. These jobs sustain our communities—now, as they have for centuries.”

Mahone Bay, Digby County, and the 10 other municipalities have all passed motions to support the inquiry into offshore drilling risks thanks to the lobbying efforts of the Nova Scotia Offshore Alliance—a coalition of organizations and community groups including the Council of Canadians, the Sierra Club, the Campaign to Protect Offshore Nova Scotia and the Clean Ocean Action Committee.

The Offshore Alliance asked Halifax Regional Council for its support, but a motion to oppose offshore drilling was defeated last October and Council has not revisited the issue since.

Marion Moore of the Campaign to Protect Offshore Nova Scotia says she supports an inquiry into offshore drilling “to protect the traditional, sustainable fishing industry and tourism industry.” But also because, she says, “we're in a climate crisis. So, we shouldn't be having this conversation. If we want to reduce our dependence on fossil fuels, we have to get rid of one of the biggest fossil fuel industries around.”

Several companies have held leases for oil exploration in Nova Scotia’s waters over the past decade including Shell, who abandoned its well in 2018 after not finding commercial quantities of oil (leaving behind a piece of pipe that was accidentally dropped into the ocean, which landed 12 metres from their wellhead—a near-miss of a potential disaster), and BP, which drilled one well last year (and spilled 136 m3 of drilling fluid—about 450 full  bathtubs—which remains on the ocean floor), but also did not find worthwhile quantities of oil. BP still holds a lease for six wells, but has yet to begin exploratory drilling on any of them.

Robert Van Waarden via The Council of Canadians
John Davis

“We believe that once the Nova Scotia municipalities really understand the level of risk, that they'll say no, this is not an acceptable activity,” says John Davis of the Clean Ocean Action Committee.

The problem is, information on all the risks of offshore drilling either does not exist, or has not been made available to the public or municipal governments.

Digby’s Gregory spoke about how this lack of information makes it impossible for her to fulfil her responsibility to protect her community. “Do we need access to good information and real influence in the decision making process to do that? We do. We need to be heard by the province. We need to be heard by the federal government. We are the grassroots of the community,” she says.

But municipal governments don’t have real decision-making power when it comes to regulating offshore petroleum resources. Which was one of the reasons HRM didn’t join the fight.

Instead, an arms-length regulatory board—the Canada-Nova Scotia Offshore Petroleum Board (CNSOPB)—has been given power to manage Nova Scotia’s offshore oil and gas industries. Its key stakeholders are the provincial and federal governments. CNSOPB has received much criticism because while they are supposed to be an objective third party, three of their five board members have direct ties to the oil and gas industry. Earlier this year, CNSOPB’s power was extended, through an amendment to federal Bill C-69, to conduct environmental impact assessments for resource extraction projects.

For Moore, the issue of offshore drilling in Nova Scotia is “a microcosm of the whole country,” and points to a much larger issue: “The reason that we're not in a position to give permission or deny permission,” she says, “is because, in the end, governments are beholden to the oil companies.”

The Offshore Alliance's public event in Mahone Bay tonight will see Mayor Sheila Davies from Kill Devil Hills, North Carolina and Councilor John Weber of Bradley Beach, New Jersey will speak about international efforts from municipalities to stop offshore drilling. In the United States, over 370 municipalities have passed resolutions opposing offshore drilling and are a key part of the successful resistance to Trump’s attempts to open the Atlantic Coast to offshore drilling.