Project would need over 1,300 km of new transmission lines 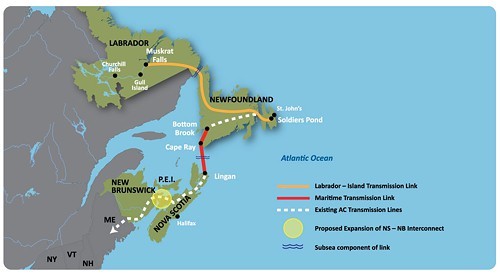 The Atlantic chapter of the Sierra Club and the Halifax-based Ecology Action Centre are calling on the provincial government to consider alternatives to the $6.2 billion Lower Churchill hydro project.

“It’s really hard to accept at face value that this is the best option on the table,” says Brennan Vogel of the EAC. “We need to see more clarity provided by government.” He adds that instead of the multi-billion-dollar Lower Churchill project, Nova Scotia should be looking at importing potentially cheaper hydro-electricity from Quebec while financing more community-based wind and solar projects here.

He says the provincial government and Nova Scotia Power seem intent on bringing in Lower Churchill power via expensive undersea transmission cables and exporting part of it to the US—a move that would boost power company profits.

“We know Nova Scotia has a monopoly electrical utility so, in the absence of competition to result in fairer prices for Nova Scotian ratepayers, we’re perhaps being left in the dark...as to what the best options on the table are for providing stable, secure, renewable electricity,” Vogel says.

On Wednesday, Vogel participated in a panel discussion on the Lower Churchill project organized by a federally funded agency known as the National Roundtable on the Environment and the Economy. The session included power company executives from Nova Scotia and Newfoundland, academics from Dalhousie and Nova Scotia’s deputy minister of energy, but members of the public and the media were excluded.

Mark Parent, a former provincial environment minister, who served as panel moderator, says the discussion was held in private so that the various “stakeholders” could speak candidly about a wide range of issues including regional energy co-operation. “It was put in the context of the regional Atlantic provinces struggle to meet greenhouse gas emission targets and also to provide stable energy,” he says.

“I was the only person on that panel yesterday that was really raising a red flag and saying, ‘Well, let’s not celebrate presumptuously that the Lower Churchill project is actually the best thing for Nova Scotia without considering some of the other alternative pathways,'” Vogel says. “That’s, in my mind, an inappropriate thing to be doing.”

Last week, Premier Dexter welcomed the announcement that the Harper government would provide a loan guarantee to help make the project happen.

“The Lower Churchill project will guarantee Nova Scotia an abundant supply of clean, green hydroelectricity for more than three decades,” Dexter said in a news release. “It will account for between eight and 10 per cent of Nova Scotia's total power needs when it starts flowing in 2017.”

However, both the EAC and Sierra Club Atlantic question the “greenness” of a dam that will create a 59-kilometre-long reservoir while flooding 41-square-kilometres of wilderness. The flooding will release deadly methyl mercury into the water and generate methane, a greenhouse gas that contributes more to climate change than carbon dioxide. A federal environmental assessment of the project is underway but is not yet complete.

“Obviously the loan guarantee [and the premier’s] lobbying on the part of the provincial government is inappropriate in the absence of a completed environmental assessment,” Vogel says. “There are still First Nations that have not participated to the level that they should in the consultation including the Mi'kmaq here in Nova Scotia."