Submitted
“I understand why no one has pursued these issues for this long before,” said Nicole Gnazdowksy, pictured at right with her late brother Andrew.

Nicole Gnazdowsky wondered what the government was saying about her, so she asked.

Nicole Gnazdowsky, the woman who’s been trying for months to get information from the province about her brother’s 2020 workplace death, said she wasn’t surprised to learn that NS staff called her efforts a “hostile attack” in government communications.

“I understand why people just give up,” Gnazdowsky said in an interview Tuesday morning.

Facing a lack of answers from the province, Gnazdowsky wondered what the government was saying about her, so she filed a freedom of information request to see communications about her between February and May 2021. The results from her FOI of the province turned up 510 pages of government emails, call transcriptions, media strategy and meeting notes which she shared with The Coast. These documents refer to Gnazdowsky and her countless requests for meetings and a complete investigation into the death of her 26-year-old brother Andrew Gnazdowsky, which happened while he was working at NS Power’s Marshall Falls reservoir in Sheet Harbour.

The results reveal an effort by Nova Scotia’s government to delete information that could tarnish its image. A document from March 4, 2021 includes instructions in an email from Scott Burbridge—the manager of investigations with the labour department’s safety branch— to delete materials about Gnazdowsky. The Freedom of Information and Protection of Privacy Act does not condone such actions: “The Act supports the belief that every document, record or file held by the government, regardless of format, is subject to release to the general public. 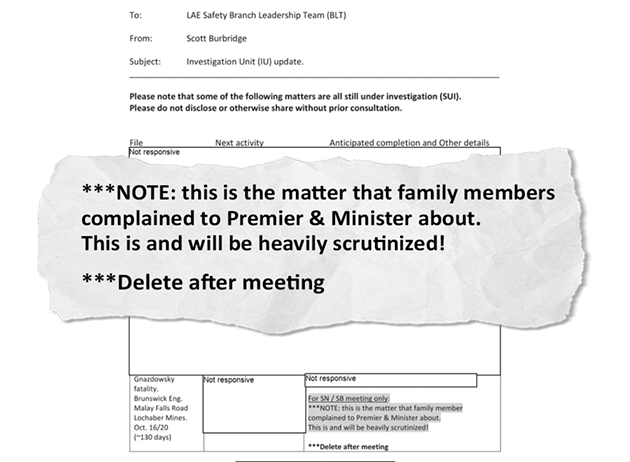 Gnazdowsky has spent most of the last year pressing the province for a fulsome investigation into what happened at the Nova Scotia Power site that led her brother to swim in search of lost surveying equipment. Andrew drowned, and his body was retrieved a day later in October 2020. “I understand why no one has pursued these issues for this long before,” she said. “They’ve built such a brick wall it’s nearly impossible to knock down.”

The Workers’ Compensation Board of NS informed the Gnazdowksy family last year that the province’s department of labour would investigate the death. The department brought in an occupational health and safety investigator who, Gnazdowksy discovered, had previously worked for Emera, NS Power’s parent company. The department eventually assigned a new investigator to the case, which is still under investigation.

In a June 30 email to Gnazdowsky from Christine Penney, the senior executive director of the department of labour’s safety branch, Penney says the department is working with an “independent, third party expert on the assessment of some of the material related to the process. We anticipate receiving information from this assessment in the coming weeks.”​​

The decision to file an FOI for internal communications came after Gnazdowsky says communication with the province halted, despite earlier discussions about her brother’s death with the premier and cabinet ministers.

“I did it because they stopped talking to me and I wanted to know why,” she said.

In an email obtained in the FOI, Scott Burbridge—who oversees the lead investigators on the province’s workplace fatalities—called Gnazdowsky a “hostile individual” in an email to senior director of inspection compliance Scott Nauss and Fred Jeffers, the executive director of occupational health and safety.

“This is a request for a meeting to discuss a matter that has gotten out of hand relative to a hostile individual who has initiated a now public attack, both personally and professionally.

The below is the text response I receive to the attached Outlook e-mail.

I am asking each of you to address the Investigation Unit to make it clear if we are supported in light of this hostile attack.

Based on the FOI, the “text response” Burbridge is referring to looks like this:

The department of labour, when asked to comment on Burbridge's instructions to delete materials, did not directly address his comments. Department spokesperson Monica Maclean said in an email Wednesday morning that workplace death investigations are complex, and "this includes consideration for confidential aspects that cannot be shared externally before an investigation is completed."

Gnazdowsky said it was disappointing to see the province describe her as hostile, but not at all surprising. “This is right about what I expected,” she said. “I have not been treated well by these people.” 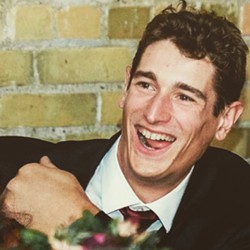 Gnazdowsky says she’ll continue pushing the province to discuss workplace deaths like her brother’s. Just yesterday she camped out in premier—and current Liberal candidate for Timberlea-Prospect—Iain Rankin’s campaign office in hopes of speaking with him, though she was unsuccessful.

“If I can’t get this problem fixed with the department of labour, then no one’s going to. So I’m not going to stop until they address it,” she said. Gnazdowksy’s brother was one of 18 people who died at work in Nova Scotia last year.

“There’s no reason why we shouldn’t be applying Westray law to these cases,” she said.

The Westray Bill is federal legislation, passed into law in 2004, that followed the 1992 Westray mine disaster that killed 26 miners in Plymouth, NS. This Criminal Code amendment is supposed to make it easier to hold employers accountable for workplace injuries and death. The first Nova Scotian charged under this Westray law was found not guilty in the death of a mechanic in 2019.

NS Power spokesperson Jacqueline Foster said in an email the company continues to cooperate with the department of labour as it leads the ongoing investigation. "Given it is an active investigation, we cannot comment further," Foster said.

The Office of Information and Privacy Commissioner has been contacted to offer comment, and this story will be updated if any is provided.


Update: Comments from department of labour and Nova Scotia Power have been added.