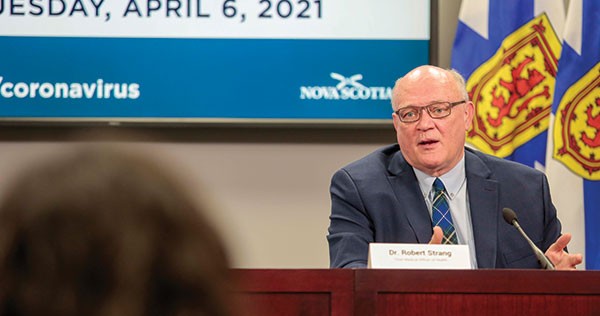 Top doc Strang on the loosened rules: “the situation in Nova Scotia could change quickly if we let our guard down.” COMMUNICATIONS NOVA SCOTIA

Newfoundland, NB and PEI residents can all come here without self-isolating, but the welcoming’s not mutual.

As of 8am this morning, Wednesday, April 7, Nova Scotia’s borders are open to travellers from all three of the other Atlantic provinces. That’s New Brunswick, Prince Edward Island and the brand-newest addition, Newfoundland and Labrador.

“You will no longer have to self-isolate for those 14 days in Nova Scotia,” said premier Iain Rankin yesterday at the regular Tuesdays-with-Strankin COVID-19 briefing, when the announcement was made. “We’re confident that the low case numbers make it possible for us to remove this measure.”


The government made the same change for PEI back on February 9, and for New Brunswick on March 20. But there is still the exception of the Edmundston region in northern New Brunswick, which Nova Scotia discourages “non-essential” travel to and from.


The region has 133 of New Brunswick’s 162 active cases. “We are also watching New Brunswick very closely, and if doctor Strang decides is necessary, we will shut that border down,” Rankin said.

As of now, the plans are still to open the Atlantic bubble, meaning between all four provinces in both directions, later this month. “April 19 right now is the plan still with the bubble,” Rankin said Tuesday.

If Edmundston is still in the red zone by April 19, that could complicate things a bit. When asked by a reporter, Rankin said the area isn’t close enough to the border to get many travellers from there.


“That’ll depend what public health deems is the risk level. Generally if they’re in the yellow zone that gives us comfort, and right now the only red zone is the northern region,” he said. “And we don’t see a lot of travel from that region into our province, little to no travel.”


But it’s all still up in the air until the date approaches.

Within the province, the other changes effective today include that businesses, malls and fitness facilities can now operate at 100 percent capacity, so long as they can maintain physical distancing.

Sports practices, training and games, and arts and culture rehearsals and performances can have 75 people, up from the 60-person limit imposed in January. Top doc Robert Strang says while physical distancing and masks aren’t required for these activities, they’re recommended.


“Keep following the public health protocols,” he said Tuesday. “Be mindful of what’s happening in other provinces and know that the situation in Nova Scotia could change quickly if we let our guard down.”