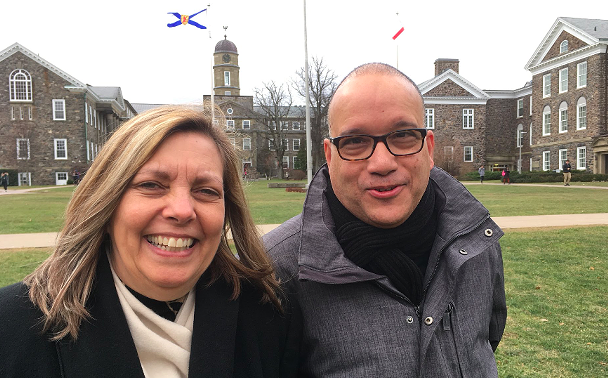 In late January 1994, Glenn Ells’ phone rang. It was newly-minted Nova Scotia premier John Savage. His officials had just returned from a checking-out-trade-prospects trip to Cuba, he explained to the president of Kings Produce Ltd., and “I think there might be something there for you.”

Two years later, Ells’ Wolfville-based fruit and vegetable wholesale company had a deal with a farm co-op in San Antonio, Cuba. Ells sent them “Sweet Mama” squash seeds and some used farm machinery; every February, the co-op shipped back freshly harvested buttercup squash “just as our local squash was running out.”

It became more than a business deal. “I made a lot of friends,” Ells says today. He even helped one Cuban couple arrange Canadian financing to launch a bed and breakfast. That couple now summers in Nova Scotia, working with Ells’ son and daughter-in-law in their vineyard.

Or on Nova Scotia salt cod.

Nova Scotia’s deep Cuba connection dates back to at least 1903 when Cuba established its first-ever foreign consulate in Yarmouth to buy cod. After Cuba won the right to harvest underutilized fish species in Canadian waters in 1977, its northern fishing fleet based itself in Halifax for 23 years.

No wonder then that Josefina Vidal, Cuba’s new star-power ambassador in Ottawa, chose Nova Scotia for her official trip outside central Canada.

She is, in fact, the fifth Cuban ambassador in the modern era to visit the province, and the fifth to be hosted by Dalhousie professor John Kirk.

Vidal describes Kirk—who has been travelling, researching and writing about Cuba since 1976 and, in 2011, received Cuba’s Friendship Medal, the highest honour it gives foreigners—as “the most Cuban of all Canadians.”

In Nova Scotia, however, he might have competition for that honour.

Another Dal prof, Isaac Saney, the author of a well-regarded book on Cuba’s revolution, is the co-chair of the national Canadian Network on Cuba. Local musician Jeff Goodspeed orchestrates regular exchanges between young Cuban and Nova Scotian musicians. Veteran Halifax photographer Dan Callis organizes regular Havana Photography Workshops for traveller-photographers from all over the world.

And we can’t forget the Nova Scotia-Cuba Association; a group of more than three dozen like-minded individuals who came together in 1989 to counter what they considered Cuba’s “raw deal” from the US blockade. During the 1990s, they filled containers to ship to Cuba with everything from medical supplies to household goods. As recently as two years ago, members loaded 200 mattresses aboard a Cuba-bound vessel after Hurricane Matthew devastated the eastern city of Baracoa.

Vidal’s visit last week was, in part, to thank all of them for their solidarity. But there was more to it too.

Vidal, a charismatic 57-year-old Cuban diplomat who’s served in Washington and Paris, and been at the centre of every dramatic event in US-Cuban relations—from the 1999 tug of war over the fate of five-year-old Elián González to the negotiations to reopen embassies in the two countries—also arrived with a business-friendly message.

Cuba has “opened up” to foreign investment and is looking for new trading partners, she told 20 businesspeople at an ACOA-organized session in Halifax. Cuba, she added—perhaps unnecessarily given her visit coincided with another snowy-rainy-sleety November week— is also keen to welcome them as tourists.

Glenn Ells, now 84, doesn’t need an invitation. He’s already booked his next flight for late January. “We’ll be staying with our Cuban friends at their B&B.”


***
Stephen Kimber is a Halifax-based author and journalist whose latest nonfiction book, What Lies Across the Water: The Real Story of the Cuban Five, won the 2013 Evelyn Richardson Nonfiction Award. His next book, a novel based partly in Cuba and partly in Nova Scotia, will be published by Vagrant Press in spring 2020.

COVID cases and news for Nova Scotia on Friday, Sep 24

COVID cases and news for Nova Scotia on Thursday, Sep 23