A “pay-as-you-throw” system could stop us from sending so much recyclable and compostable material to the Otter Lake landfill. 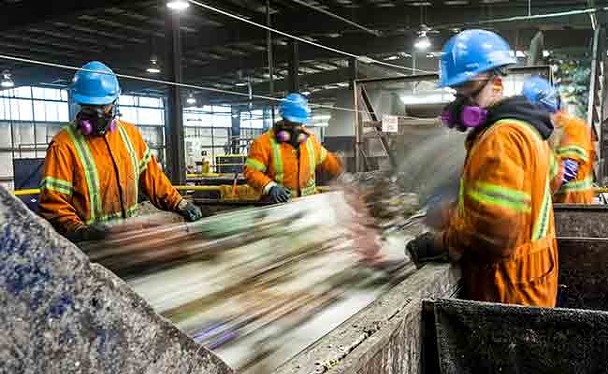 RILEY SMITH
Workers sort through the trash at the Otter Lake Landfill.
In a recent self-assessed report card, the Otter Lake Community Monitoring Committee released the results of a December waste audit that found 52 percent of residential waste and 71 percent of business waste was reusable, recyclable or compostable material.

“It was a surprise to us that the numbers were that high,” says Ken Donnelly, a consultant with CMC. “There’s an opportunity for better policing.”

He also notes that 13 percent of residential waste and 15 percent of business waste is textiles that could go in charity bins widely available across the city. Charities raise money for their good deeds via sales of secondhand clothing.

On the though, the numbers have been consistent since 2002, through four consecutive studies—the latest being in 2012 by the Resource Recovery Fund Board (now called DivertNS).

According to Doug Hickman, a solid waste consultant who works locally and internationally with governments to improve waste policy, that study found more than 50 percent of materials going into the landfill were banned. Nova Scotians trundle on at practically the same recycling rates they’ve had for decades. Government programs are based almost entirely on public education, which is still needed to maintain current but is no longer moving us forward.

Such measures exist elsewhere, now that other jurisdictions have surpassed our once world-leading waste management system. “In Massachusetts,” many municipalities “have a pay-as-you-throw scheme,” says Hickman.

There, residents pay for the cost of waste disposal depending on the amount they discard, excluding recycling and composting. As a result, “their quantity of waste has decreased by a third.”

The Flemish region of Belgium has an environmental tax for disposal based on weight and what kind of waste it is—the most expensive being landfill waste—while the collection of textiles, paper and bottles is free.

“They are down to 115 of waste generated per person per year,” Hickman says.
Flanders has the highest rate in Europe, with nearly three-quarters
of residential waste reused, recycled or composted.

Hickman knows that tax policies are politically unpopular, but says Nova Scotia needs to consider financial disincentives to waste, and incentives to composting and recycling as part of its plan to build a local economy.

“Ontario has estimated that for every 1,000 tonnes of recycled materials, seven jobs are created.”

He suggests that this is a revenue-neutral system change, not in how much we all pay for waste management, but rather how we go about it. One might pay a rate for waste and a lesser rate for recycling and composting.

Despite the disappointing numbers, both Hickman and Donnelly say that there has been due to HRM’s clear-bag program, which allows for some monitoring of household waste.

In fact, while many of the wrong things are still going in the landfill, the “amount of residential waste going to the landfill has decreased by 24 percent, thanks to the municipality’s clear bags policy,” according to the CMC’s report card document.

But that success can’t be replicated with the commercial sector, Hickman says, because it uses bins, not bags. “Bins are very hard to inspect.”


Update: An earlier version of this story misquoted Hickman as saying seven jobs were created per tonne of recycled when it's actually per 1,000 tonnes. The quote has been corrected and The Coast for the error.