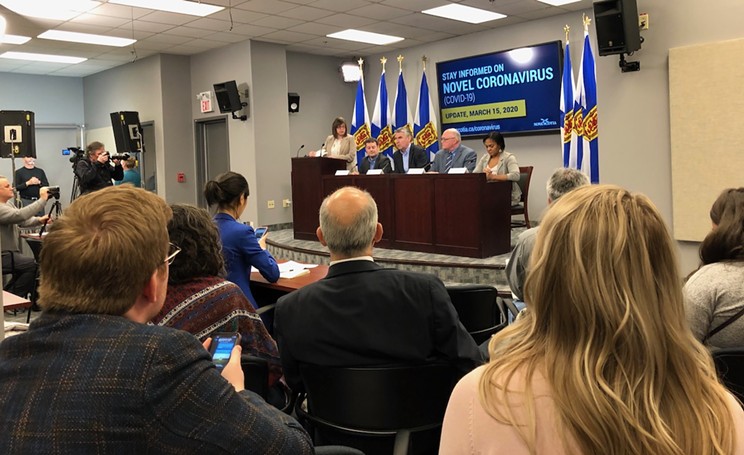 The Coast
Journalists, politicians and Nova Scotia officials crowded in to hear about the province's first COVID cases on March 15, 2020.

So much death, too little information.

Sunday, March 15, 2020, the provincial government’s media briefing room in downtown Halifax was packed with journalists and TV cameras. This was before social distancing and gathering limits. Before masks. It was even before COVID-19 had officially arrived in Nova Scotia—this press conference would be the disease's coming out. True to the Shakespearean warning, Dr. Robert Strang announced three confirmed COVID cases that Ides of March day, describing the patients in detail. Their genders and approximate ages, their home counties, where they'd been travelling before bringing the disease back to Nova Scotia.

It was too much information even for Halifax, with its international airport and international students, its relatively large and relatively cosmopolitan population. In a neighbourhood in the heart of the city, people figured out who the 50something man recently returned from a conference in California was, and went to gawk at his house. The curtains stayed tightly closed, as if to keep the disease in or the gossiparazzi out.

Strang quickly recalibrated as case numbers mounted, and over the course of the pandemic, information flow has tended to get more restricted. Today, the second anniversary of COVID’s arrival in NS, government information is down to a trickle.

Case numbers now come out once a week. Last Thursday's report said there were 2,459 new cases diagnosed in the week, about 350 per day on average. By comparison, at the height of the first wave—and the province-wide lockdown—the most cases announced in a single day were 55 on April 23, 2020, although the first-wave average never went above 35 cases in a day.

Over the course of the last two years, the pandemic has killed 209 Nova Scotians according to official numbers. The bulk of those deaths, 111 victims, happened in 2020 and 2021, at an average rate of one Nova Scotian dying from COVID every six days. In 2022 there have already been 98 deaths, meaning people are dying at an average rate of higher than one death every day. That most-recent update from the province reported 16 deaths in the week, which works out to COVID currently killing more than two Nova Scotians every day.

As far as we’ve heard from Strang or premier Tim Houston’s government, Nova Scotia is going ahead with its plan to drop basically all COVID rules on gathering, social distancing and masking this Monday, March 21. After two years of lockdowns and limitations to try to slow the disease's spread, it's confusing to meet so much death with such a full retreat from public health measures, without a clear reason why. "It certainly isn't the thing that makes the most sense to me," Nova Scotia’s respected COVID testing leader Dr. Lisa Barrett said last night on CBC. “I don't see a good scientific reason for taking away masks in public places at this point.”

Two years in, Nova Scotia has managed to go from too much information to nowhere near enough.