Nova Scotians are still dying from the overdose crisis

On the national day of action, activists are calling for a safe drug supply, decriminalization of drugs and more. 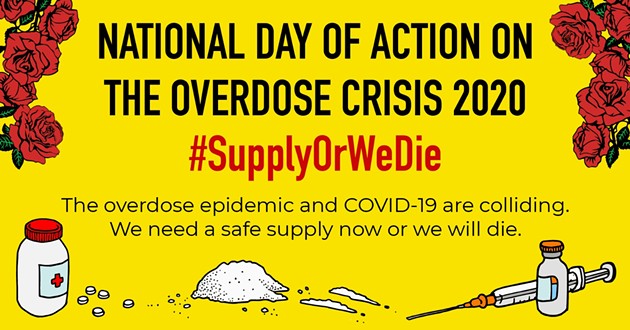 Submitted
Thursday, April 30 is the National Day of Action on the Overdose Crisis 2020. Since 2016, more than 9,000 Canadians have died from an overdose.
Just as Nova Scotia tries its best to contain COVID, and Canada’s largest mass killing in recent history leaves 22 people dead from an unimaginable act of violence, there are other tragedies that have been swept under the rug amid the chaos.

Canada’s overdose crisis continues to claim the lives of our neighbours and friends—on a daily basis I deal with the devastation of preventable deaths. If we don’t start responding to the overdose crisis the same way we do to other public health emergencies, our most marginalized citizens are going to continue to die. Today is the National Day of Action on the Overdose Crisis and we are calling for a safer drug supply.

Approximately 11 Canadians die each and every day from drug-related overdoses. What happens to people who are using drugs when black tar heroin—a dark-coloured form of heroin that is not often seen in Canada—shows up in the middle of a pandemic? Heroin of any kind is uncommon in Nova Scotia's drug supply, so the reported black tar heroin was mostly likely fentanyl or potentially one of its deadlier analogues such as carfentanil or isotonitazene, potentially even cut with a stimulant.

The RCMP recently shared on their social media they are “concerned about recent instances of drugs within Windsor-West Hants, which appear to be crystal meth and heroin but may be even more potent. These drugs are believed to have contributed to two overdoses.” Another rural area hit by the tainted drug supply is Cape Breton. There have been recent reports of potent purple fentanyl flooding the market there. The Ally Centre of Cape Breton is warning people about the appearance of the illicit dangerous drug. They also believe it has resulted in multiple non-fatal overdoses in Sydney and Sydney Mines.

I’ve been using drugs for a long time in Nova Scotia, and this is the first time I can remember hearing about “black tar heroin” in our province. If it’s in Windsor-West Hants and causing overdoses, it’s everywhere.

This new kind of drug is scary and has caused at least two overdoses—one which resulted in death—in the area. Witnesses close to the most recent incident said reversing one of the overdoses required multiple vials of naloxone, but the other person wasn't reached in time and ended up dying from a fatal overdose. This kind of experience is traumatizing for anyone to go through—from responding to an overdose to just knowing you used with someone and they died. I’ve lost too many friends who died a preventable death due to the tainted illicit drug supply.

Recently I lost a close friend of mine due to an overdose. It shocked me, but I also feel desensitized to tragedy when I get this kind of news. It wasn’t until I was home alone when it sunk in and I wept in frustration. My friend Billy was a phenomenal guy and the system failed him. A system that is created to oppress and criminalize people for a substance use disorder when we know this is a health issue, not a criminal one. There’s a system of structural oppression in Nova Scotia that attempts to stop people from using drugs, and it doesn’t work. The province has yet to support the life-saving Overdose Prevention Site.

Instead, by criminalizing drug use it creates an avenue for illicit manufacturing, cultivation, production and distribution of drugs that has resulted in approximately 60 overdoses deaths last year in Nova Scotia. That’s a lot for our population size.

People say the War on Drugs failed, but in reality, it was a huge success for politicians campaigning on it, police forces financially gaining from it, and judges and lawyers kept busy with plenty of work because of it. People who use drugs make up the vast majority of arrests.

This has not been a war on drugs, it’s a war on drug users. And the combination of prohibition of drugs, lack of safe drug supply, poor support for people who use drugs, plus the COVID-19 pandemic on top of an overdose crisis—it's a perfect storm against people who use drugs, but remember they are people first.
Unless we act now we will see the same increase in overdose deaths in Halifax that we are seeing in Vancouver, Toronto and Regina because of the pandemic. The Canadian Association of People Who Use Drugs and the Toronto Harm Reduction Alliance are hosting multiple online Days of Action to urge doctors to start prescribing a safe supply of drugs.

We must show the same urgency when responding to all of the public health emergencies. Every one of these overdose deaths is someone’s child. They don’t deserve to die. Save a life: support safe supply. 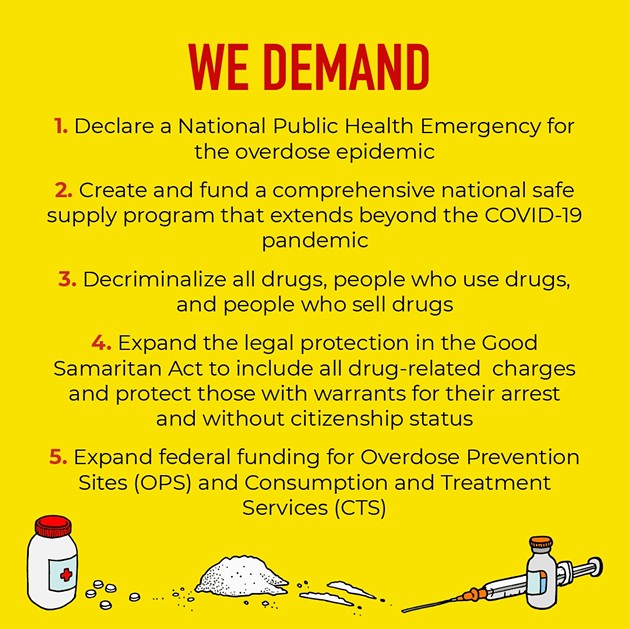 Thursday April 30 is the National Day of Action on the Overdose Crisis 2020, organizers have five demands.