The misadventures of a South Shore dynasty returns Sundays on CBC and CBC Gem.

When it comes to telling the story of a dysfunctional family that’s also financially messy, Jennifer Finnigan says Moonshine—the one-hour CBC dramedy in which she stars—has a lot to add to the canon: “I can't compare our show to anything, really. Yes, there's sort of quirky elements of Arrested Development and Schitt’s Creek, absolutely. There's a little Succession vibe in terms of wanting to take over the business and the cutthroat aspect of that. But I think it has its own tone, it's so unique,” says the actor, known for her Emmy-winning stint on The Bold and The Beautiful, head bobbing for emphasis with each series comparison. “It's hard to categorize the show: Is it a comedy, a drama, what is it? Is it heightened? Is it grounded? We question that every day. And that is part of the challenge of doing this show, it is part of the beauty of it. That doesn't come around that often. So when people ask me: ‘What does it remind you of? And what do you compare it to?’ Well, I can't really. I'm so desperate for the world to see the show: Because I personally find it joyful and comforting. And touching. And weird in all the right places.”


Her co-star Allan Hawco (who you might remember from the CBC series Republic of Doyle) sits next to her, a chorus of affirming mm-hmms. “And entertaining!” he adds. “Yes! Entertaining AF!” Finnigan replies. Speaking with The Coast via Zoom, the pair is busy filming Moonshine’s third season, with the set looming in the video call background. But while they’re at work, it’s the series’ second season hitting audiences, available to stream on CBC Gem and airing Sunday nights at 9pm on CBC starting this week. 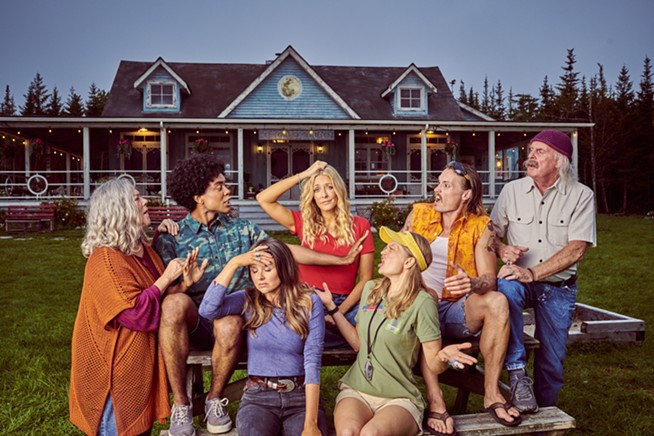 Submitted
The dysfunctional family at the heart of Moonshine.


Set on Nova Scotia’s south shore, Moonshine became an instant hit when it debuted in 2021, with the type of addictive messiness that kept Arrested Development afloat for three seasons: Moonshine’s Finley-Cullen family is comprised of five adult sibling squabbling over a late aunt’s will—and the faded oceanside resort she left behind. The tagline of “lust, legacy and lobster” splashed across ads for the show on Halifax city buses that year carried concise expectations.


Season 2 sees Finnigan’s Lidia falling for Hawco’s character: “This started as just a physical thing. It was like: She just wanted to jump his bones—she hasn't had good sex in years. And so here he is, and he's got his vibe, his tattoos,” she flips the lapel on Hawco’s leather jacket, they both laugh. She adds: “It gets deeper: It goes down to a deeper level. And then, I don't want to spoil it, but it becomes real. And I just loved the way that story was told because it's not a generic love story. It’s not a Hallmark vibe.”

Aside from the rich character development both actors cite as their favourite thing about the series, the other aspect they say sets Moonshine apart is its authenticity. “That’s [writer/creator] Sheri Elwood: She always said that she wanted to write a show that would bring her home, essentially. And we talked about how meta it is, but we film on her parents' campground, the Hubbard's campground,” Finnigan adds. “This is the story of like, it's not an exact, accurate retelling of her childhood and her family. But she's definitely inspired by the characters she grew up with.”