In a region that’s all about the bubblies, wineries are changing their approaches—and attitudes—toward red wine. 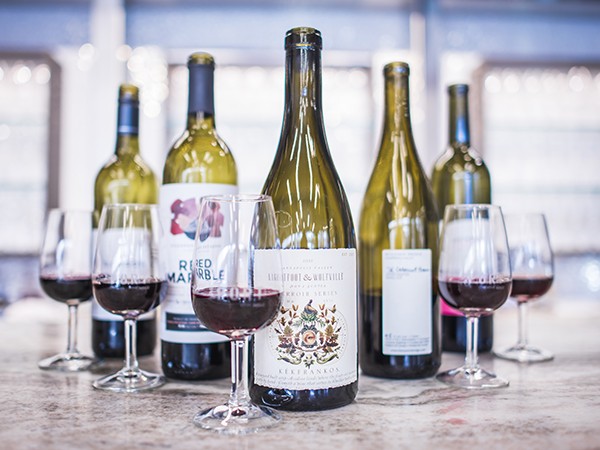 Kylee Nunn
Mike Mainguy says the "snobbery" around local red wine is disappearing
It pools in deep garnet and edges the glass in bright purple, nearly magenta. A swirl releases stewed blackberries, ripe blueberries, pickled red pepper and the smoke and salt of a beach fire. A touch to the lips is a laser of acidity that melts over the tongue, and the mouth is awake and ready for—needing—food. This is a typical glass of Nova Scotian red wine.

Wine critics don’t t have much to say about Nova Scotian reds. While international awards honour our bubblies, and national attention focuses on the innovative appellation project Tidal Bay, our red wines remain ignored.
But this is not an obscure wine style.

“Phone Box Red is our number one selling wine,” says Mike Mainguy, winemaker at Luckett Vineyards in the Gaspereau Valley, which made 30,000 litres of the popular blend in 2017 and expects to sell it all by next Christmas.

Blomidon Estate Winery in the Annapolis Valley is known for its critically acclaimed Chardonnay program. The whites may win the awards, but winemaker Simon Rafuse has to take his red winemaking seriously.

“It represents a massive percentage of overall sales,” he says. “But there’s a disconnect between what critics want to talk about and what people like to drink. Our Baco [Noir] is our best-selling wine.”

A big part of that change is a shift in attitude. Winemakers are no longer making wine from the grapes and in the style that we want, but rather responding to the environment first. “You have to respect the climate,” says Rafuse. “Working with the attributes of grapes and the attributes of the climate leads you down a very different path.” For many, that path is a leaner, fruitier style of red wine.

“Blow Me Down is very different now,” says Rafuse of Blomidon’s red blend. “It’s got huge pigment, great acid, low tannin, it’s nearly a rosé. Instead of trying to craft it into a barrel-ferment style, we now make it light and bright, to promote the fruit.”

To attain the lighter style, a winemaker may press more gently, limit skin contact and ferment at cooler temperatures. Several winemakers also use partial or complete carbonic maceration—a technique of fermenting grapes whole—so the fermentation happens inside the berry, with exposure to carbon dioxide instead of oxygen. The effect is a fresh, fruity wine.

A second direction for red wine is to make it bigger, capitalizing on the aromatic and flavour richness of Nova Scotia grapes, thanks to the hang time they enjoy on the vine in our long, cool growing season. “People tend to equate bigger with better,” says Mainguy. To get a fuller-bodied red, grapes may be dried to concentrate their juices, and the wine may be fermented and aged in oak barrels. To lower acidity and reduce weedy aromas, wines may be cold-stabilized, racked and pumped-over.

On Nova Scotia’s south shore, Petite Rivière Vineyards also keeps richness the focus when it comes to red wine, which this winery champions as its forte. Christian Perlat (vineyard manager and winemaker) and his wife Gabrielle (operations manager) believe the south shore has good reason to pursue this style. “On the drumlins,” says Gabrielle, speaking of the small, rolling hills created by retreating glaciers, “the rocky, well-drained, poor soil gives grapes concentration, thicker skin, more tannin. The plant puts all its nutrients into the grapes to survive our soil.”

“The hybrid is a grape with big character,” says Christian, stressing the importance of time in making good red wine. “Hybrids require a lot of patience. To change the reputation of red wine in Nova Scotia, we need to be patient.” Most red wine at Petite Rivière will spend a year in tank and three in . Christian advocates for production regulation and yield controls, and will sit on a committee of the Grape Growers Association of Nova Scotia looking into viticulture regulation.

style of red wine is pursued by wineries that take the chance on more delicate grape varieties. Wines from the vinifera (European) varieties Pinot Noir, Pinot Meunier, Cabernet Franc and Gamay have all been made here, as well as a recent batch of Kékfrankos, a Hungarian grape released by Lightfoot & Wolfville in the Annapolis Valley.

“Ours is a lighter style of red,” says Rachel Lightfoot, assistant winemaker. “We’re OK with low alcohol and fresh fruit; we’re proud that that is what our climate is giving us.”

Benjamin Bridge released a 2016 Cabernet Franc in September, and a 2017 batch is on the way. “It’s got brighter acidity,” says Savoy of the wine in relation to Cab Francs from other regions, “and the aromatics are off the charts.”

All three red wine styles have costs and benefits. The lighter-bodied, fruitier style is in response to a climate that produces high acid wines, and a species of grapes we can grow consistently. This style, which should be drunk young and perhaps served chilled, is trending, and, as Mainguy says, “critics are leading us here.”

The bigger reds are rewarded by a market that leans toward fuller-bodied red wine, making the investment in oak barrels and storage worthwhile. Balancing richness and earthiness with high acidity is challenging, but these wines age well.
And where do the Pinots and Cab Francs fit?

“That’s a separate story,” says Simon Rafuse. “Vinifera have to be babied to the point that they are not commercially viable except in some years.” These wines are expensive to make, and the price tag means they are not the average Nova Scotian’s everyday wine. But this separate story, Rafuse says, “is an interesting one.” Interesting enough that Lightfoot & Wolfville’s winemaker Josh Horton has been invited to Oregon to be a panel speaker at the International Pinot Noir Celebration.

“They’re requesting the Pinot,” says Rachel Lightfoot. “People are intrigued by our reds in the lighter style.”

Narratives like this are exciting in a region where red wine has historically been met with and snickers. Equally exciting is the prospect of a red wine style that is simple, enjoyable and affordable. One that’s ours.

“Will red wine be a big export from the province?” muses Mainguy. “It has a home here. And people are getting courageous, interested in new styles. The snobbery from three, four years ago is disappearing. It’s a good time for reds!”

In an effort to better understand red wine in Nova Scotia today, wineries were invited to provide samples of red wine they felt best demonstrated Nova Scotian terroir. Terroir refers to the sensory experience of environmental and cultural elements that make wine—or any food—typical of a place.

Five sommeliers and wine judges gathered at The Port by NSLC to blind taste 14 red wines from all over the province.

While the remarkable range of wine styles showed the directions wineries were taking with their reds, a coherent sense of terroir remained elusive—“except the acidity,” says one sommelier.

In some cases, they speculated whether or the wines themselves, were too young to show character. Because terroir includes culture—our history of winemaking and other social forces that influence a winemaker’s decisions—they also wondered if Nova Scotia as a wine region has not yet matured to the point of having honed a sense of itself through its red wine.

“This tasting 15 years ago would have been remarkably different,” observed one judge. “More acidic, more single varietals, more Foch and Lucie [Kuhlmann], more pickle and seaweed.”

“I see a lot of what I think winemakers should be focusing on,” said another judge, summing up the tasting: “Playing to the acid, minerality, fruit.”

A toast to our ocean playground: the best three Tidal Bays of 2018

The sweet success of sour beer

By Alec Martin and Cameron VanBuskirk

Yes she can: inside the process of a beer can designer