The latest on COVID-19 from Strang and McNeil. 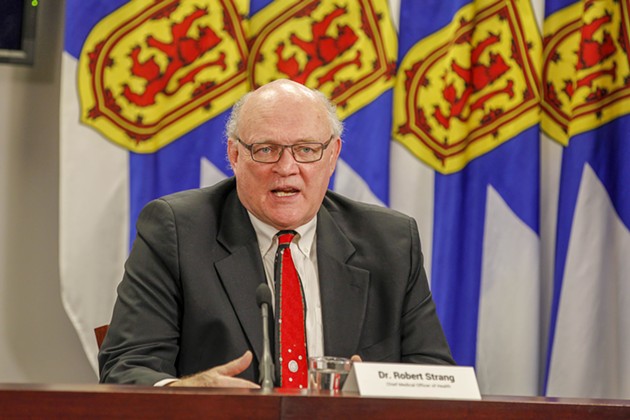 Communications Nova Scotia
Strang tells Nova Scotians that even if restrictions change, not to plan for normal holiday gatherings this year.
On December 11, the Nova Scotia government announced nine new cases of COVID-19 in the province. Two of those new cases are tied to Eden Valley Poultry, a poultry farm in Berwick in the Annapolis Valley. In total, four cases have been detected at the factory now, enough for premier Stephen McNeil and chief medical officer of health Robert Strang to deem it an “outbreak.”

“We are waiting for over 300 test results to come back in. There is no evidence of community spread at this point, but we have to act fast,” says McNeil, who announced the plant would be shut down for two weeks at his regular webcast media briefing with Strang.

One of today’s other new cases is tied to Shannon Park Elementary, the second case there this week, bringing the province's total of active cases up to 65.

With new cases still coming the province has decided to close schools for an extended period of time over the winter break, out of what McNeil is calling an “abundance of caution.”

“Christmas is comin’, and we are concerned that as family and friends gather, even in small groups, Covid could show up,” said McNeil, citing spikes in western Canadian provinces after Thanksgiving weekend.

Originally, the break was expected to last from about December 22 until January 4. Now the last day of classes before the break is Friday, December 18, and the first day back is scheduled for Monday, January 11, 2021. Teachers will return for professional development Monday, January 4.

“There will be other restrictions and protocols that we will put in place for Christmas, and doctor Strang and I will have more details on those next week. But we believe that shutting schools down for an extra week is precautionary and protective,” says McNeil.

But with school closure now less than a week away, it may be difficult for parents to obtain childcare, even if they’re working from home. When asked, McNeil said the one week’s notice should be enough. “That’s why we’re giving, making the announcement today, to give families an opportunity to prepare for that week,” he said.

If you can't find childcare though, the CRCB (Canada Recovery Caregiving Benefit) will give you $500 (pre-tax) each week you need to stay home to look after a child under the age of 12 or family member due to school closure or illness, up to a maximum of 26 weeks.

Though the Pfizer vaccine is expected to begin its slow roll-out in Nova Scotia early next week on December 15, Strang says the province is not out of the woods yet, and again cautioned that it would be months before everyone was vaccinated.

The province will prioritize the vaccine distribution based on the same recommendations put forth by Health Canada. This means first up are long-term care residents and staff, frontline health care workers involved in the Covid response, and the elderly.

“The vaccine is going to make a huge difference, we know that, but the uncertainty around when you’re going to get it and when you’ll be eligible, I get that that causes anxiety,” he says. “But please be assured we’re rolling this out in a logical, evidence-based manner. You will hear from us, and it will take a number of months.”

In the first three months of 2021, Strang says the province is expecting to receive 150,000 doses, enough for 75,000 people to receive the required two doses each.

But even those people who receive the vaccine first should still be wearing masks, social distancing, and following other public health measures. “What’s not clear at this time is that even if you’re immunized there’s still the possibility that you could asymptomatically transmit the virus,” Strang said.

The Coast spoke with Denys Khaperskyy, an assistant professor and researcher at Dalhousie University in the department of microbiology and immunology all about the vaccine this week. You can read about it here.

For those who hoped for a normal holiday gathering this year, Strang says they need to lower those expectations, adding “If you haven’t already done so, please, you need to start planning for a different kind of holiday season this year. One that is spent close to home with people you love, and in consistent, small groups.”