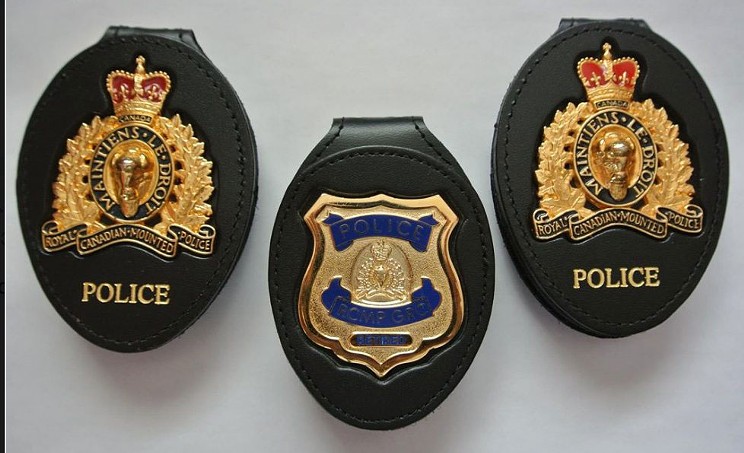 It will soon be illegal to not only sell, but also to possess unaltered police gear. VIA FACEBOOK

Old badges may be encased in acrylic or resin so they can’t be passed off as the real thing.

On March 11, the province of Nova Scotia announced that new legislation will eventually come into place “making it more difficult for someone to impersonate a police officer.” This comes nearly 11 months after a police impersonator–wearing reflective-stripe pants and a uniform shirt–killed 22 people with a firearm in Portapique and surrounding areas. It also comes just days after RCMP in Nova Scotia pre-emptively incinerated almost seven tonnes of gear.

In a release, justice minister Randy Delorey explicitly references Portapique. "In April 2020, Nova Scotia endured a tragedy that few can comprehend. The lives of 22 innocent people were lost and our province was left traumatized and heartbroken," he says. "By strengthening our laws around the use of police vehicles, uniforms and other articles, we are taking steps to help prevent such events from happening again."

Julia Cecchetto, president of the Nova Scotia Chiefs of Police, says the act would help “prevent a similar tragedy and re-establish confidence in the symbols that identify police officers in our province.”

The province is very clear that similar laws already exist and more are likely coming. The criminal code bans the impersonation of an officer; a Jan 22 ruling suspended the sale of surplus RCMP vehicles; and the official Portapique inquiry is looking into “areas for additional changes to further enhance public safety.”

But the new law covers everything from use and management, to possession, sale and reproduction of police-issued items.

In layperson’s terms, the act means not only can police officers not sell their old badges anymore, but they can’t trade them online, give them away to their relatives or pull someone over using an outdated badge. “We will work to ensure Nova Scotians are aware of the changes so that anyone who may own police items can bring them to a police agency to be assessed, turned over or made unserviceable,” says department of justice communications advisor Heather Fairbanks.

For the police agencies in the province that have a back room full of old gear sitting around, they will also have to get rid of it–eventually.

“Every police agency would be required to have an asset management and disposal policy for police articles, police uniforms, police vehicle-markings and police-vehicle equipment,” Fairbanks tells The Coast in an email. But the new law still puts no official time limit on police units disposing of excess gear, as long as it’s within that force’s new “asset management and disposal policy” guidelines.

That policy must include: a process for tracking items, a requirement for police-issued items retained by former or retired officers to be made unserviceable, and a process for individual citizens to forfeit, or have permanently altered, any currently used police issued items they own.

The release says eventually, there will be a program where all Nova Scotians can have their police-affiliated items destroyed or altered in a way that they can never be confused with an item still in use. “It may mean encasing a police badge in acrylic, for example, so it could not be picked up and used to impersonate a police officer,” says Fairbanks.

But despite the new legislation, Fairbanks says it’s impossible to know how many badges, uniforms and other pieces of memorabilia are out there. “We are aware that articles exist in the public domain, it would not be possible to provide an estimate.”

As for the multitude of sales and auctions that exist online, Fairbanks says there’s also little that can be done. “We recognize that online sales exist. We also recognize the challenge in trying to regulate this expansive virtual medium,” she explains.

The fact that the new law targets possession, as well as sales, will hopefully help with that.

“The legislation we are proposing expands beyond the purchase and sale of police items to include possession of such items,” Fairbanks says. “So, although it is possible that someone may be able to acquire items online it will be illegal for them to possess them and police will have the legal authority to search and seize them.”

The act hasn’t come into effect yet. It’s just been introduced in the house, and must still go through three readings and receive royal assent before being passed into law.